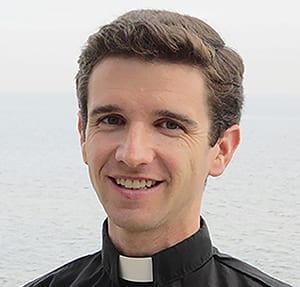 Jack M. Krouse, S.J., grew up in San Jose, California, with his loving parents and his younger sister and brother. Raised in the faith by his family and St. Christopher School, Jack came to know the Jesuits while he was a student at Bellarmine College Preparatory in San Jose. There, he was inspired by his Jesuit teachers and coaches who had chosen for their lives this particular pathway toward God. At Bellarmine, Jack discovered a love for history and literature, which he then studied at Harvard University. While at Harvard, Jack worked part-time in the Office of the President, served as managing editor of the Harvard Political Review and interned one summer at the British Parliament in London. After graduation, he moved to Washington, D.C., where he interned at the White House before serving several years at the U.S. Department of Homeland Security. During this time, Jack discerned more seriously the call to a different kind of mission and service, in priesthood and religious life. In the novitiate, he ministered in a hospital, at a Los Angeles juvenile hall and on retreats for California state prisoners. He also lived with a L’Arche community; worked at Verbum Dei High School, the Cristo Rey school of Los Angeles; and continued Spanish language studies in Bogotá with the Jesuit scholastics of Colombia. During philosophy studies at Loyola University Chicago, Jack spent one summer working at the Kino Border Initiative in Nogales, Mexico, and one summer with the Jesuits of Colombia and the Missionaries of Charity in Cartagena. During regency, Jack loved teaching Catholic ethics and the Old Testament to the students at Loyola High School of Los Angeles, while joining his faculty and staff colleagues on student retreats, community service projects and an international exchange with the Jesuit schools of Uruguay and Argentina. He then served as campus minister and religion teacher for one year at Sacred Heart Nativity School in San Jose. In 2020, Jack earned his Master of Divinity degree at Centre Sèvres, the Jesuit theology and philosophy school of Paris, while serving at the Catholic chaplaincy for the college students of Sciences Po, the political science and diplomatic university of France. After ordination, Jack will finish a Licentiate in Sacred Theology at Centre Sèvres while continuing his ministry at the chaplaincy for students of government and diplomacy in Paris.