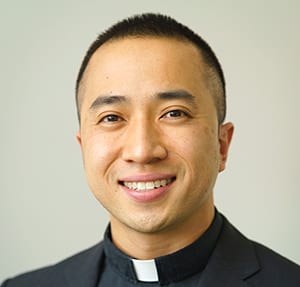 Martin H. Ngo, S.J.’s parents were “boat people” who escaped from the Vietnam War in 1980. After a year of moving from one refugee camp to another, they were sent to the United States. He and his two younger sisters were born shortly thereafter in Orange County, California. At five years old, a Jesuit friend of the family told him endearingly, “You will become a priest.” The prediction would not come true without the struggle of discernment. At 16, he encountered God on a Kairos retreat led by Jesuit regents. Ten years later, he applied to the California Province Jesuits. During that decade, Martin studied computer science and performing arts at the University of California, Irvine; worked for a software company in Mission Viejo; and became a systems analyst for the City of Los Angeles under Antonio Villaraigosa, who was mayor at the time. All the while, Martin nurtured his love for acting and joined Lifebook Acting Academy in Hollywood under the mentorship of a great teacher, Allen Levin. In 2009, two years into the nation’s financial crisis, he tendered his resignation letter at City Hall after receiving a call from the vocation director notifying him of his acceptance into the Society of Jesus. As a novice, he did his short experiment in Jamaica at St. Anne’s Primary in Kingston. He worked in production for Christus Ministries during his first year as a regent. The remaining two years of his regency, he taught digital media arts and ran student life activities at Verbum Dei High School in the Watts neighborhood of Los Angeles. Obtaining a master’s degree in digital storytelling from Loyola University Chicago enabled him to assist in content creation for many works, including The Jesuit Post, a website offering a Jesuit, Catholic perspective on the contemporary world, and donor videos for prison ministry programs. Martin earned a Master of Divinity degree and a Licentiate in Sacred Theology from the Boston College School of Theology and Ministry and served as a deacon at the Basilica of Our Lady of Perpetual Help in Boston. His first assignment as a priest will be at Loyola Marymount University as a full-time campus minister.