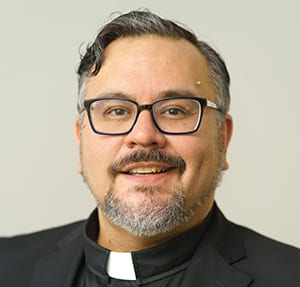 Xavier Benavides, S.J., was born in San Antonio, Texas, the oldest of three children. He earned a bachelor’s degree in philosophy and English from Texas A&M University and an MBA from the University of Michigan. He worked in a variety of places before joining the Jesuits, including Microsoft, Cisco, Amazon, Oxfam America, AmeriCorps and the National Council of Churches. From each of these jobs, he recognized in himself a deep desire to serve others which led him to the Jesuits. Xavier entered the novitiate in 2011, and as a Jesuit in Formation, earned a master’s degree in sociology from Loyola University Chicago. During his regency, he served as the director of campus ministry at Cristo Rey High School in Sacramento and also taught geometry. He served as a spiritual director for the last five years and helped lead the 19th Annotation program at St. Ignatius Church in Chestnut Hill, Massachusetts. Xavier received his Master of Divinity degree from the Boston College School of Theology and Ministry and served as a deacon at Our Lady of Grace Church in Chelsea, Massachusetts, and St. Mary of the Assumption Parish in Revere, Massachusetts. After ordination, Xavier will serve at St. Leo Catholic Church and Sacred Heart Parish in Tacoma, Washington.