Fr. Blake was born in San Jose, Calif., on May 15, 1926. After graduation from Bellarmine College Preparatory in San Jose, he served in the Army Air Corps as a radio operator during World War II. He attended Santa Clara University for two years before joining the Jesuits in 1948. He taught Latin and chemistry at Loyola High School in Los Angeles (1955-58), and pursued theological studies at Alma College. He was ordained a priest in 1961 and made his Tertianship in Colombia, in “a great tomb of a building, full of cracks caused by an earthquake,” which featured a recreation room having “no furniture in it; just a bare room with a picture on the wall, which someone said was a Christmas decoration they forgot to take down.”

Fr. Blake served as a teacher and parish priest in Mexico, 1964-69 (Mexico City, Jalapa), and re-entered the military as a U.S. Army Chaplain in 1969. His assignments included service in Vietnam and Cambodia, where he received the Bronze Star for service under fire. His letters described his experiences there: the heat, the constant rifle and mortar fire, the trips by chopper to say Mass at fire support bases and in the field, and even an encounter with a very large python. Later assignments included Hanau, Germany, Canal Zone, Sinop, Turkey, and Ft Huachuca, Ariz., where he and the ceremonial color guard stationed there dressed in 1870 style cavalry uniforms for parades and civic functions.

Returning to civilian life in 1981, Fr. Blake served as a spiritual director and retreat master at the Jesuit Retreat Center of Los Altos. To assist in his work, he studied at the C. J. Jung Institute, Zurich, where he received a diploma in analytical psychology in 1989.

“As I learned more about Jungian psychology, I realized that what Carl Jung was saying on the psychological level fit well with the Christian spiritual journey, give or take a few ideas….After four years of study, I graduated with the diploma as a Jungian analyst….It has been a great gift in my work as spiritual director and retreat director. Depth psychology has led to depth spirituality.”

Fr. Blake returned to his work at Los Altos as a retreat director and became active in the Vatican II Institute at St. Patrick’s Seminary in Menlo Park. At both places, he gave special themed retreats and workshops using Jungian themes.

He then served as associate pastor at St. Francis Xavier Church in Phoenix (2000-03), before assuming his last assignment as pastoral minister at Sacred Heart Jesuit Center in Los Gatos.

Fr. Blake was an avid backpacker and loved exploring the Sierras, especially Yosemite. His military assignments and sabbaticals, including a stay at a Benedictine monastery in Tamil Nadu, India, made him a world traveler and served as a source for many stories.

He is survived by his brother, Freeman D. Blake, of Eureka, Calif. 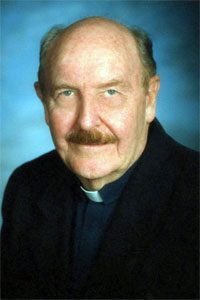