Affectionately known as “Brownie,” to many and “El Padrecito del Barrio,” to others,  he served in the Barrio Logan parish from 1968 until he retired to the Jesuit health care center in 2018 as associate pastor, pastor, and senior priest.

In addition to sacramental ministry, baptizing thousands of babies, witnessing marriages, conducting funerals, and blessing motorcycles and lowriders, counseling gang members, he was active in the parish school. He worked with various civic and church organizations in the barrio to keep his young parishioners out of gangs.

After leaving his pastorship in 2005, he worked for many years at St. John of the Cross church and school in Lemon Grove.

Richard Hyatt Brown was born in San Diego on April 28, 1927, the fourth child of Donald H. Brown and Dorothy Coenen Brown. His father died when he was 10 and his mother raised the family of five children. Richard graduated from St. Augustine High School in 1944 and studied at the California Maritime Academy in Vallejo as a member of the Navy Reserve. A severe illness led him to a change in his life direction, and he entered the Jesuit novitiate in Los Gatos in 1946 to study for the priesthood.

His studies took him from Los Gatos to Spokane, and to Alma College, Los Gatos, for theological studies. He was ordained a priest in Blessed Sacrament Church, Hollywood, on June 18, 1958. From 1960-1963 he taught Latin and Spanish at Loyola High School, Los Angeles. He followed this with an assignment at the Sanctuario Reina de Los Angeles in Mexico City, working with youth groups in a large urban parish. Returning to the United States in 1968, he came to Our Lady of Guadalupe church, with which he was identified for the rest of his active ministry. In his retirement he kept in contact with his former parishioners.

Richard is survived by niece, Ann Hope of San Diego. He was predeceased by siblings Rev. William Brown, Patricia Benton, Jean Hope, and Jerome Brown. A private funeral service was held at Sacred Heart Jesuit Center and a live streamed memorial Mass will be offered Saturday, May 30 at 12 noon. Contact the parish’s website for details https://www.facebook.com/olgsd.org/ or https://olgsd.org/

Donations in memory of Father Brown may be made to the Jesuits West Province of the Society of Jesus, P.O. Box 68, Los Gatos, CA 95031, or to a charity of your choosing. 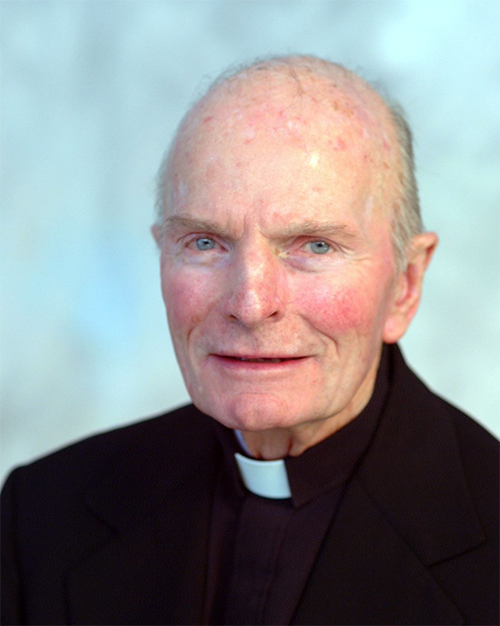