Jesuit Father J. Alfred Carroll, 84, died Sept. 11, 2013, at Regis Jesuit residence in Spokane, Wash. Born in Seattle on Oct. 26, 1928, he graduated from Seattle Preparatory School and in 1946 entered the Jesuit Novitiate in Sheridan, Ore. He was ordained a priest on July 31, 1959 in Frankfurt, Germany.

Following ordination, Fr. Carroll taught at Seattle Prep and Bellarmine Prep in Tacoma, Wash. At Bellarmine he also served as vice principal and principal. Fr. Carroll then went to Gonzaga University in 1972 and served students, faculty and administration in a variety of capacities throughout his long career. His positions included assistant professor of classical languages and associate dean and acting dean of the College of Arts and Sciences.

In the mid-1970s, after the end of the Vietnam War, Fr. Carroll saw a special need to assist refugees from Vietnam and began a program to help them. The plight of the Amerasians (children of Vietnamese/Korean mothers and American fathers) became a particular concern to Fr. Carroll, who helped hundreds of these young people come to the United States and helped enroll more than 100 directly to Gonzaga University as students. In 1980, Fr. Carroll established the Korean American Fund, which helped Amerasian students with tuition and living expenses. He successfully lobbied Congress to pass the Amerasian Homecoming Act of 1982. For his tireless advocacy, Fr. Carroll was awarded an Honorary Doctor of Laws degree by Gonzaga in 1987. His work inspired Gonzaga’s English Language Center. 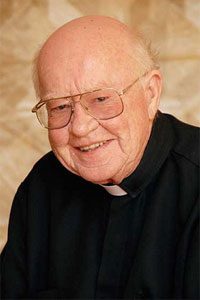