Paul Gerard Crowley was born in Sacramento September 12, 1951, the son of Charles Crowley and Doris Baisley Crowley.  He graduated from Stanford University with a BA in Humanities in 1973. His graduate work was at Columbia University / Union Theological Seminary in New York, earning a MA in the philosophy of religion in 1975. He then earned his doctorate in Theology at the Graduate Theological Union, Berkeley, in 1984.

Paul entered the Jesuit novitiate in Santa Barbara in1986 to study for the priesthood. Since he already had a doctorate, his training was tailored to his needs and included a two-year appointment teaching at Santa Clara, 1989-1991. After a year of studies at the Jesuit School of Theology (STL, 1991), Paul was ordained a priest on June 6, 1992 in St. Ignatius Church, San Francisco.

Paul then resumed his teaching at Santa Clara until 2001. After a two-year appointment as Visiting Professor at the Weston School of Theology, Cambridge, MA, 2001-2003, he returned to Santa Clara, where he taught until his retirement earlier this year. In addition to his classroom activities, Paul also served as department chair, as well as on various university committees.

During Paul’s long association with Santa Clara University, he developed a reputation as being a fine teacher and respected colleague. His scholarly interest was in the interaction of theology and modern thought and his published works in books and scholarly journals were well received. He was an active member of the Catholic Theological Society of America and, in addition to making conference presentations, served in official capacities in the group. He was influential in developing the careers of many younger theologians. From 2016 to 2019, he served as editor of the Jesuit-sponsored journal, Theological Studies.

Paul was predeceased by his immediate family, parents, sister, Sheila, and brother, David.

Due to Covid-19 restrictions, funeral services will be private but live-streamed on Monday, August 24, 11 a.m. PDT Link: https://bit.ly/Crowleymemorial (case sensitive if entering manually)

Donations in memory of Father Crowley may be made to the Jesuits West Province of the Society of Jesus, P.O. Box 68, Los Gatos, CA 95031, or to a charity of your choosing. 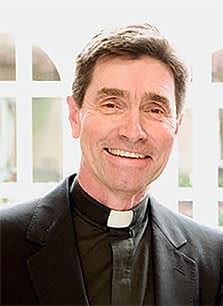