May 28, 2020 — Father Thomas W. Franxman, SJ, retired professor of Scripture and Semitic languages, died May 24, 2020 at Sacred Heart Jesuit Center, Los Gatos, at the age of 87 and would have celebrated his 70th anniversary as a Jesuit later this year.

Thomas William Franxman was born in Covington, KY on January 14, 1933, the only child of J. William Franxman, a meat cutter, and Mary Jane Fitzpatrick. The family moved to San Francisco and Tom attended St. Ignatius High School. Upon graduation in 1950, he entered the Jesuit Order in Los Gatos to study for the priesthood. His studies took him to Spokane, where he earned his BA and MA in philosophy at Gonzaga University. From 1958-1961, he taught Greek at St. Ignatius High School. This was followed by his theological studies at the Alma College campus of Santa Clara University, where he earned a master’s degree and a Licentiate in Theology. He was ordained a priest June 5, 1964 in St. Ignatius Church, San Francisco.

After completing a year of studies in Austria, Tom did graduate studies at Oxford University, UK, earning a PhD in Semitic Languages in 1975, with a thesis on the literary and exegetical treatment of Genesis in the Jewish Antiquities of Flavius Josephus, later published in book form.

He served on the Faulty of Ancient Oriental Studies at the Pontifical Biblical Institute, Rome, teaching Semitic languages, Judaic literature of the inter-testimental period, and the Talmud, 1970-1986. He then taught languages and Scripture at Heythrop College of the University of London, 1986-1990, the Pacific Regional Seminary, Fiji, 1991-1996, and Loyola School of Theology, Manila, 1997-2001.

Returning to the United States, he did research at Jewish Theological Seminary, New York City, 2001-2007, and Hebrew Union College, Cincinnati, 2007-2012. In 2012, he retired to a ministry of prayer at Sacred Heart Jesuit Center, where he had begun his Jesuit training.

He had no surviving relatives. A private funeral Mass was held at Sacred Heart Jesuit Center. Donations in memory of Father Franxman may be made to the Jesuits West Province, P.O. Box 68, Los Gatos, CA 95031, or to a charity of your choosing. 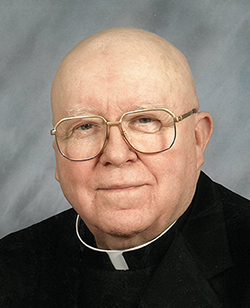