His Jesuit studies were made at Los Gatos, Gonzaga University for philosophy studies (BA, 1959), Georgetown University Law Center (JD, 1963), and Alma College, Los Gatos for theology (MTS, 1967). He was ordained a priest in Hollywood in 1966 and admitted to the California Bar in 1964. Paul then attended New York University Law Center, 1967-69, receiving an LLM. He later did a one-year fellowship in law and the humanities at Harvard Law School.

After completion of studies in 1969, Paul began a 50-year association with Clara University Law School. He taught a variety of subjects, specializing in contracts, community property, wills and trusts, and jurisprudence. He became emeritus in 2009 and remained in close contact with faculty, students, and alumni.  A garden of native plants in the new law center has been named in his honor. In 2019, Paul moved to Sacred Heart Jesuit Center, where he continued to research and give talks to the community on current events.

In addition to his teaching, Paul was actively engaged in other areas. He served on the board of trustees of Santa Clara University and the University of San Francisco. In the wider civic community, he was on the board of Santa Clara County’s anti-poverty agency, Economic and Social Opportunities; The Advisory Board for the Young Parents Center in Santa Clara; the Biomedical Ethics Committee of San Jose Hospital among others. His priestly ministry included presiding at the marriages, baptisms, and funerals for many alumni, Masses for Religious Sisters, and chaplaincy to prisoners in the county jail. In recent years, he found special satisfaction in his service to the San Jose/Santa Clara Chinese Catholic Community.

He was proud of his Hungarian-American heritage and visited the homeland of his immigrant parents.

Paul is survived by his brother, Alex (Karen) of Los Angeles, his niece Tracy Silverman and grandniece Alexandria Silverman, his cousin Wanda Bailey, and others of his family. 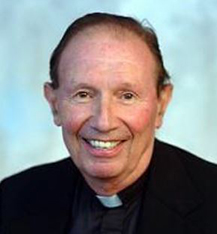