Fr. Paquet was born in Boston and was as Boston as they come, growing up in St. Peter’s Parish in Dorchester, a legendary source of so many vocations to the priesthood, religious life and especially the Society. His father, a carpenter, and his mother, in domestic service, had left Prince Edward Island for Boston after World War I when jobs were scarce there. He grew up, as he said, “in a clan” — his father was one of 13 children and his mother one of 12. Fr. Paquet himself had five brothers and sisters.

When he was seven years old, he contracted polio. The illness left him with severe spinal curvature, which required intermittent surgeries until well into his high school years. He attended Boston College High School and decided to enter the Society when he graduated in 1946.

He did philosophy studies at Weston. Not, by his own admission, strongly interested in studies, he had a fervent desire to help people. He volunteered for the Baghdad mission and spent regency there, teaching English, math and religion in the English-medium school. In those days, a mission assignment was understood to be permanent and, in fact, after returning to Weston for theology studies, ordination there in 1960 and tertianship at Pomfret, he happily returned to Baghdad. He studied conversational Arabic for a year, then became minister of the community at the newly opened Al-Hikma University on the other side of the city from Baghdad College. He returned to the college in 1964 and taught there until the political situation deteriorated and the government expelled first the Al-Hikma Jesuits and then, in 1969, the College Jesuits. Fr. Paquet was in the States that summer, using an NSF grant to take a course in teaching “the new math,” so never got to say goodbye to the place he loved.

For several years he worked in the Jesuit Missions office and then as treasurer at Campion Center. He was asked to be part of a new province venture in Amman, Jordan, and from 1984 until 1994 he taught religion, with periods of advanced studies in the U.S., at a girls’ school operated by the Nazareth Sisters in Amman. Health issues, related to his childhood spinal problems, began to limit his mobility, and in 1994 he returned permanently to Campion Center. In recent years he derived great joy from long hours in the confessional every week in St. Patrick’s Parish in Natick. 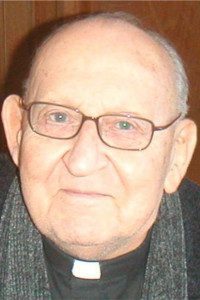