Born in St. Louis on January 26, 1939, Fr. Renner entered the Society of Jesus at St. Stanislaus Seminary in Florissant, Mo., on August 8, 1956. He completed a B.A. in philosophy at Saint Louis University and studied music at Washington University in St. Louis. After teaching Latin and directing the jazz band at Regis Jesuit High School in Denver from 1965 to 1967, Fr. Renner studied theology at Saint Louis University. He was ordained to the priesthood on June 4, 1970, at the St. Louis Cathedral.

After ordination, Fr. Renner taught music and directed the concert and jazz bands at St. Louis University High for several years. As chair of the Music Department, he helped develop both the choral and instrumental music programs. He completed an M.A. in music theory at Washington University in 1980. Fr. Renner moved into university work the following year. He served in campus ministry at Creighton University in Omaha while completing an M.S. in counseling. He then worked as a student counselor and academic advisor at Saint Louis University, serving there from 1986 to 2001. Much of his work was with international students, whom he helped adjust to a new culture and guide through the complexities of university life. During that time he completed a Ph.D. in education with a focus in dounseling.

Fr. Renner worked as an assistant editor at the Institute of Jesuit Sources in St. Louis from 2004 to 2013. Included among his projects was a translation of “Paris in the Time of Ignatius of Loyola, 1528-1535,” by Philippe Lécrivain.

In early 2013 Fr. Renner’s health began to decline. He moved to the Fusz Pavilion in St. Louis and continued praying for the church and the Society of Jesus until his death. He is survived by his brother, Michael Renner, and his sisters, Mary Behan, Laurie Walters and Ann Stein. 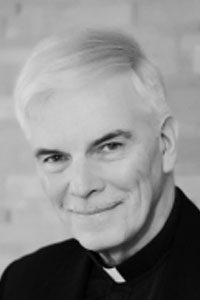