March 6, 2020 — Fr. James A. Rude, SJ, a Jesuit priest whose ministry ranged from the high school classroom to the parish church to direct social action, died March 5, 2020 in the infirmary at Sacred Heart Jesuit Center, Los Gatos. He was 86 years old and would have celebrated his 70th anniversary as a Jesuit later this year.

James Anthony Rude was born in Los Angeles July 5, 1933, the son of Maynard P. Rude and Laura La Casse Rude. After graduating from Loyola High School., Los Angeles, he entered the Jesuit novitiate at Los Gatos in August 1950.  His Jesuit studies took him from Los Gatos to Manila and Taiwan (Chinese language), and Spokane (philosophy). After two years of teaching Latin at Loyola High School, he made his theological studies at Alma College, Los Gatos and was ordained a priest in Hollywood on June 10, 1964.

Upon completion of studies, he returned to teaching, primarily at Loyola High School (1967-1978), where he also served as school chaplain and founder of the “Christian Action Movement (CAM),” a social action program for students involving hundreds of students serving in soup kitchens, visiting retirement homes, tutoring inner-city youth. He also taught and served as community superior at Jesuit High School, Sacramento, 1987-1992.

His parish ministry assignments included a pastorate at Christ the King Church, San Diego, 1978-1980, associate pastorates at Dolores Mission, Los Angeles, Blessed Sacrament Church, Hollywood, 1997-2001, campus ministry work at Santa Clara University, and ministry at the Jesuit house in Honolulu. His last assignment prior to retirement was at the Diocesan Pastoral Center in Fresno, 2005-2017, where he also served as diocesan director of social action and co-editor of the diocesan newspaper.

In 2011, Loyola High School awarded Jim its Cahalan Award, given to an alumnus for distinguished and meritorious service to the school and community at large. It was noted that Jim decided that his vocation centered on the happiness of others and that he inspired and mentored a generation of students to be service-oriented. In all his assignments, Jim went out to minister at homeless shelters, county jails, state and federal prisons. He advocated strongly for social justice and strongly against the death penalty.

Jim was predeceased by his brother, Paul, and is survived by a brother, Arthur, of Simi Valley, nephew, Steven (Sheena), of Calabasas, and eight other nephews and nieces and their families.

Donations in memory of Father Rude may be made to the Jesuits West Province of the Society of Jesus, P.O. Box 68, Los Gatos, CA 95031, or to a charity of your choosing. 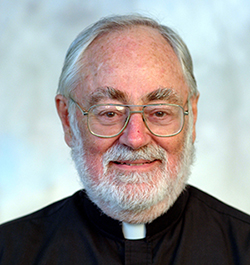