Born in St. Paul, Minn. on Jan. 2, 1929, Fr. Schak attended grade school and high school in Superior, Wis. He completed two years of college at St. John’s University in Collegeville, Minn., and entered the Society of Jesus at St. Stanislaus Seminary, Florissant, Mo., on Aug. 20, 1948. He had the usual Jesuit course of studies at St. Stanislaus, St. Louis University and St. Mary’s College. He was ordained in 1961, did tertianship from 1962 to 1963 and spent two years studying Spanish in Bogota, Colombia, before moving on to Argentina and beginning 48 years of pastoral ministry in the environs and later in the city of Salta.

‘Padre Juan’ was a missionary pastor: steady, fiercely loyal, with few frills about him. He loved Christ, the Church, and the people entrusted to his care. And Fr. Schak, in turn, was much beloved by all those whose lives he touched during almost a half-century of ministry in Argentina. The last 25 years of his ministry in Argentina were spent as pastor of St. Joseph the Worker Parish in the city of Salta, where he had been sent after the death of Jesuit Father Joe Lally, his Jesuit companion in pastoral ministry in Argentina (and also from Superior, Wis.). The local paper in Salta described Fr. Schak as “a priest who makes roads where he walks.”

Fr. Schak was always at the service of his people. One phone call he was not able to take came just a few days before his death as he lay in intensive care in a hospital in Salta. The call was from Pope Francis, whom Fr. Schak had known when the pope was the Argentine provincial. Told that Fr. Schak was not available to take his call, the pope settled for calling the Archbishop of Salta, who conveyed Pope Francis’ blessing to Fr. Schak. 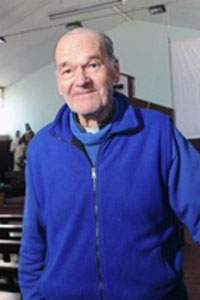