Five Jesuits West novices professed First Vows of poverty, chastity, and obedience at a Mass at the Sacred Heart Chapel on the Loyola Marymount University campus on August 12.

With their First Vows professed, the five men are continuing their Jesuit Formation in First Studies in which they will pursue master’s degrees in philosophy while also studying theology. 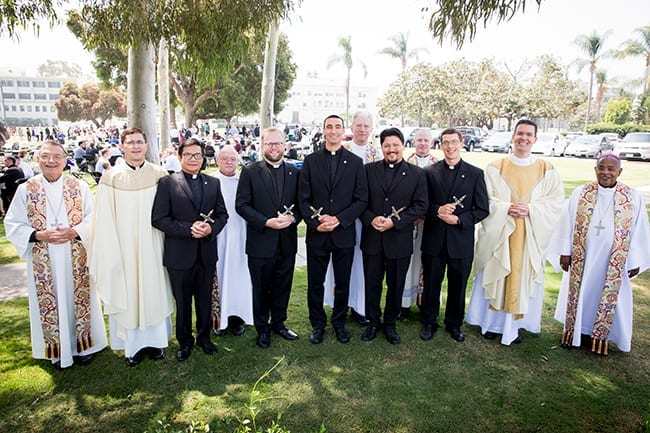 Liesegang, 35, earned a bachelor’s in cognitive science and theater from the University of Virginia and a master’s in entertainment technology from Carnegie Mellon University in Pittsburgh. Previously, he was a video game and theme park developer in Los Angeles and Washington, D.C. He was excited to discover the spirituality and work of the Jesuits as he looked for ways to combine his faith and his daily work. He will begin his studies at Fordham University.

McCreery, 25, graduated from Jesuit High School in Sacramento in 2010 and then earned his bachelor’s in Buddhist studies from the University of Chicago in 2014. He taught math and religion to junior high students at his Catholic grammar school. In addition to choir, McCreery worked behind the scenes in theater and dance performances in high school and college. He has taught RCIA and confirmation classes. He will begin his studies at Fordham University.

Meyers, 26, holds a bachelor’s in civil engineering from Gonzaga University where he was a resident assistant in the dorms. He participated in summer study abroad trips to Zambia, and following graduation, he lived in rural villages in the Copperbelt Province of Zambia, teaching residents how to obtain clean water, as well as basic computer skills. He enjoys cycling, hiking, and spending time outdoors, and will begin his studies at St. Louis University.

Millikan, 31, holds a bachelor’s in philosophy with a minor in economics from Whitman College in Walla Walla, Wash., and a master’s in teaching from Seattle University. He played varsity soccer at Whitman and was active in campus ministry. After college, he lived with undocumented farm workers while serving with Intermountain AmeriCorps in Wenatchee, Wash., and coached soccer and taught for three years at Eisenhower High School in Yakima, Wash. He will begin his studies at the Universidad Jesuita de Guadalajara in Mexico.

Parcon, 46, earned a bachelor’s in mechanical engineering from Ateneo de Davao University in Davao City, the Philippines, a master’s in software engineering from National University in Costa Mesa, Calif., and an advanced computer security certificate from Stanford University’s Center for Professional Development. He taught catechism classes to eighth grade students and fed the homeless at Christ Cathedral in Orange County, Calif. His interests include movies, basketball, computers, and hiking. He will begin his studies at Loyola University in Chicago.