Four to be Ordained as Newest Priests of Jesuits West Province

This year’s ordinands contributed to the discernment of the location of the Mass, as a call to awareness about the plight of immigrants.

Bishop of San Diego Most Reverend Robert W. McElroy will preside at the Mass. 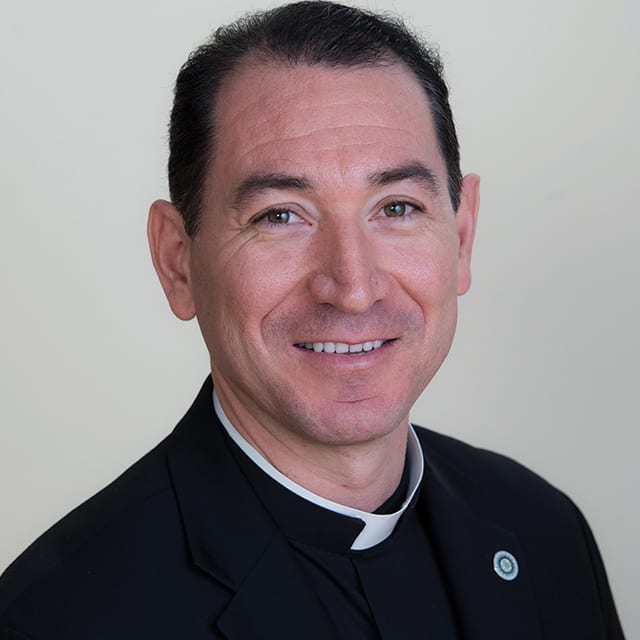 Father O. Alejandro Báez, SJ, was born in Jalisco, Mexico, where he was inspired, even as a young boy, by the joyfulness of priests and nuns at his local parish church. After high school, he immigrated to Southern California and became active at St. Peter’s Italian Church, a parish that serves immigrants, run by the Missionaries of St. Charles-Scalabrinians.

The Scalabrinians soon asked Alejandro to discern a vocation to their order, and he began studying at St. John’s College Seminary in Camarillo, Calif., while serving as director of religious education and music director at St. Peter’s. A vocalist and self-taught organist and pianist who has studied at New York University and The Juilliard School, Fr. Báez has always held a passion for music.

Although he deeply identified with the Scalabrinians’ charism of helping immigrants, Alejandro felt that God was calling him elsewhere. After earning a bachelor’s degree in philosophy, he left the seminary and began to discern a vocation to the Jesuits. He entered the Jesuits in 2004 and, as a novice, worked at Dolores Mission School in East Los Angeles, with the Yup’ik people in Chefornak, Alaska, and with a L’Arche community in Spokane, Wash.

Missioned to Fordham University in the Bronx, New York, he studied theology for one year before earning a master’s degree in music education from New York University while student teaching. He then taught at Jesuit High School in Sacramento from 2011-2013 and Verbum Dei High School in Los Angeles from 2013-2015 in both the music and theology departments.

Father Báez was next missioned to the Jesuit School of Theology of Santa Clara University in Berkeley, where he earned a Master of Divinity degree while serving as a deacon at St. Raymond Catholic Church in Dublin, Calif. He values wellness/fitness and believes that exercise is a pillar of a healthy and balanced ministerial life as well as a way to find God in all things. Father Báez’s Masses of Thanksgiving will be celebrated at St. Raymond and St. Peter’s Italian Church. He has been missioned to the Bellarmine Jesuit Community in Tacoma, Wash., and will serve as a music instructor at Bellarmine Preparatory School. 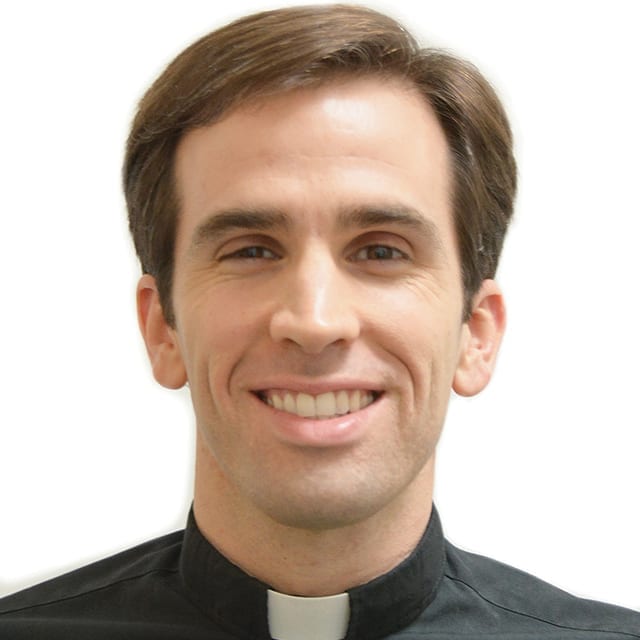 Father Thomas J. Flowers, SJ, grew up in Morgan Hill, Calif., near San Jose. His family was active at St. Catherine of Alexandria Parish, where Thomas altar served and his parents taught catechism. He first met the Jesuits as a student at Bellarmine College Preparatory in San Jose, and immersed himself in campus ministry, leading retreats by his senior year.

At the University of California, Santa Barbara, Thomas studied history while volunteering at the campus Newman Center. After graduating in 2006 with a bachelor’s degree, he taught religion for a year at Archbishop Riordan High School in San Francisco, while discerning his vocation with a Jesuit spiritual director. In 2007, Thomas entered the Society of Jesus and, as a Jesuit novice, published his first book of poetry, “Walking Humbly: Scripture Meditations in Verse.” He also spent six weeks in Uruguay in a Spanish language immersion program.

Missioned next to Saint Louis University, Thomas earned a master’s degree in early modern European history and published his second book, “God’s Invitation: Meditations on a Covenant Relationship.” In 2012, he returned to his alma mater, Bellarmine College Prep, to teach world history and religion for two years before serving for a year at the U.S.-Mexico border with the Kino Border Initiative, a bi-national humanitarian aid organization co-founded by the Jesuits.

In 2015, Thomas was missioned to Rome to study theology at the Pontifical Gregorian University, where he earned a bachelor’s degree in sacred theology. Thomas, who lived at the International College of the Gesù in Rome just steps away from the rooms of St. Ignatius of Loyola, considered his years in the city an immersion in the history of the church and the Society.

Ordained a deacon this spring, he will serve at Most Holy Trinity Catholic Church in San Jose this summer before beginning doctoral studies in history at the University of York in England. Following ordination, Fr. Flowers will celebrate a Mass of Thanksgiving with his brother Jesuits at St. Joseph Cathedral in San Diego. 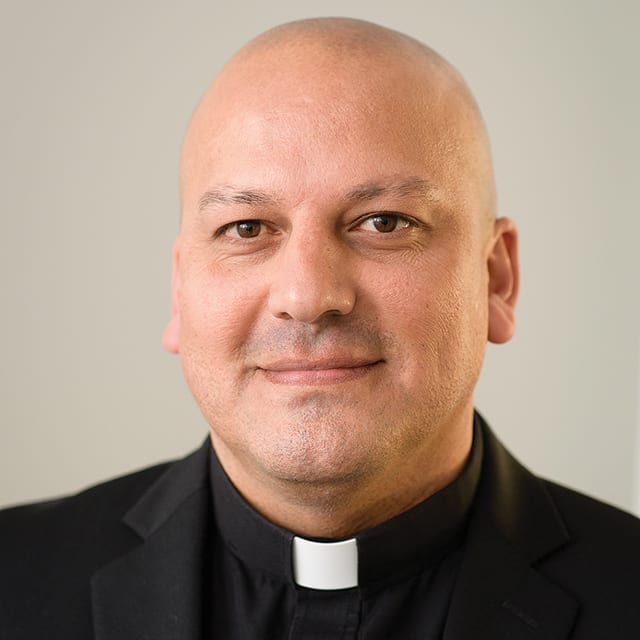 Father Elías Puentes, SJ, was born in Mexico but immigrated to the U.S. with his family when he was a teenager. As a student at Maywood Christian School outside Los Angeles, he balanced academics with a nearly full-time job at a local grocery store. One day after graduating from high school, he was driving past Dolores Mission, a Jesuit parish in Los Angeles, and found himself inexplicably and strongly drawn to the church. Before long, he was part of the community at Dolores Mission, working as a clerk in the office.

Elías was quickly spotted by the staff of Proyecto Pastoral, the homeless shelter housed in the church, and was asked to join their team. For the next seven years, Elías took on increasingly more responsibility with the shelter, eventually serving as director of the program. He also formed close friendships with Jesuits and immersed himself in parish life while discerning his call to the priesthood.

After building an academic foundation at East Los Angeles Community College, Elías entered the Jesuits in 2006 and, as a novice, did a six-week pilgrimage in the San Joaquin Valley with migrant farm workers and worked at Sacred Heart Nativity Schools in San Jose, and at the Jesuit infirmary in Los Gatos.

Missioned in 2008 to Saint Louis University, he earned a bachelor’s degree in philosophy before serving for one year at Loyola Academy, a college preparatory program for underserved middle school boys that is part of Brophy College Preparatory in Phoenix. Missioned next to Gonzaga Preparatory School in Spokane, Wash., for two years, Elías taught Scripture and managed the school’s diversity program.

In 2015, he was missioned to the Boston College School of Theology and Ministry, where he studied for a Master of Divinity degree while working as a deacon at St. Mary of the Angels Church in Roxbury, Mass., a diverse parish committed to social justice. His Jesuit formation also included work in prison ministry as well as a summer spent at the Kino Border Initiative, a bi-national humanitarian aid organization co-founded by the Jesuits.

After ordination, Elías will continue his studies at the Boston College School of Theology and Ministry. He will celebrate a Mass of Thanksgiving at Dolores Mission in Los Angeles. In January 2019, he will be missioned to the Bellarmine Jesuit Community in Tacoma and serve at St. Leo Parish as parochial vicar. 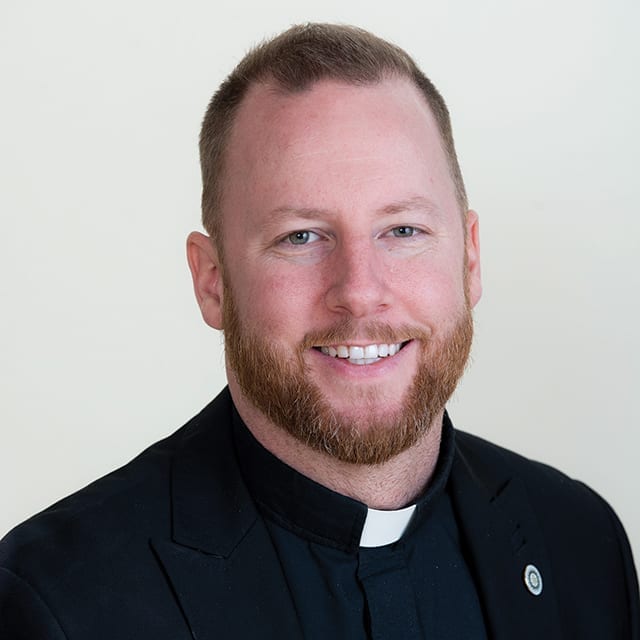 Fr. John T. Tanner, SJ, grew up in Thousand Oaks, Calif. Although baptized Catholic, J.T. was not a regular churchgoer until he was in his junior year of high school and began attending St. Angela Merici Catholic Church in Brea, Calif., where he was confirmed his senior year.

After graduating from high school, he attended Fullerton Community College before transferring to California State University, Long Beach, where he earned a bachelor’s degree with a double major in philosophy and religious studies while also working as a youth minister at his parish. While attending a conference for his job, someone asked those thinking about the priesthood to stand up. To J.T.’s surprise, he did. Later, while discerning his vocation, he attended a talk by Fr. James Martin, SJ. Afterward, he began reading Fr. Martin’s book “My Life with the Saints,” and three chapters in, J.T. knew he wanted to be a Jesuit; he entered the Society of Jesus in 2007.

During the novitiate, he worked at St. Ignatius College Preparatory in San Francisco and with migrants in Tijuana. He then went to Fordham University in the Bronx, earning a master’s degree in philosophical resources in 2012. Next, J.T. spent two years teaching theology, coaching track, and working in campus ministry at Loyola High School of Los Angeles, followed by a year of working with migrants at the U.S.-Mexico border at the Kino Border Initiative, a bi-national humanitarian aid organization co-founded by the Jesuits.

Missioned next to Bogotá, Colombia, J.T. studied theology for a year and half at the Jesuits’ Pontificia Universidad Javeriana before heading to the Jesuit School of Theology of Santa Clara University in Berkeley, where he earned a Master of Divinity degree. He also served as a deacon at San Francisco General Hospital and for the Spanish-speaking community at St. Ambrose Catholic Church in Berkeley.

He will celebrate a Mass of Thanksgiving at his home parish, St. Angela Merici. In January 2019, he will be missioned to Colombiere House in Los Angeles and serve at Blessed Sacrament Parish as a pastoral minister. 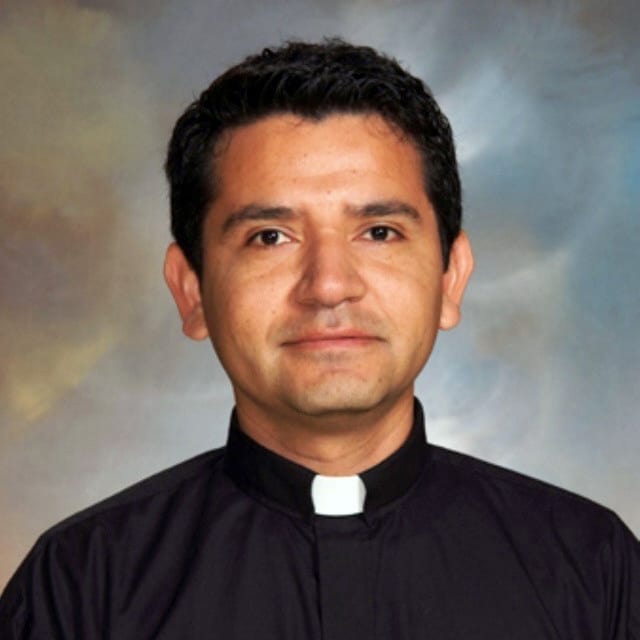 (Note: Fr. Roberto Carlos Durán, SJ, originally scheduled to be ordained with his brother Jesuits on June 9, was ordained to the priesthood March 23 at the Metropolitan Cathedral of San Salvador in the crypt of Blessed Archbishop Oscar Romero.)

Fr. Roberto Carlos Durán, SJ was born in San Miguel in eastern El Salvador. He was raised by his grandmothers in San Salvador, and the family attended Santa Lucía Parish in Ilopango, San Salvador. Carlos received a bachelor’s degree in social communication from Universidad Don Bosco in San Salvador in 2004 while learning English at Centro Cultural Salvadoreño.

In 2005, he moved to San Francisco and worked for a small Hispanic newspaper, El Bohemio News, covering local events in the city and coordinating advertising. Helping with the Hispanic youth group at Mission Dolores Parish sparked his interest in religious life, and after contacting the Jesuits, Carlos began receiving spiritual direction from a Jesuit deacon at St. Agnes Parish in San Francisco. After attending several discernment retreats and a silent retreat at the Jesuit novitiate in Culver City, Calif., he decided to join the Society.

As a novice, Carlos taught Spanish at St. Ignatius College Preparatory in San Francisco and volunteered at a L’Arche community in Seattle, where people with and without disabilities live together in mutual relationship. He was next missioned to Loyola University Chicago for one year before moving to Buenos Aires, Argentina, where he earned a bachelor’s degree in philosophy from Colegio Máximo de San José. While in Buenos Aires, Carlos also did youth ministry at Santa Brigida Parish.

Next, he was missioned to teach Spanish and religion at Bellarmine College Preparatory in San Jose, Calif., where he also led student immersion trips to El Salvador and Taiwan. Carlos spent one summer in Madrid, working at Pueblos Unidos, a Jesuit organization that offers services for immigrants and the unemployed. He moved to the Boston College School of Theology and Ministry to begin a degree in theology and served as a deacon at Immaculate Conception Parish in Everett, Mass.

As an ordained priest, Fr. Durán serves as the associate pastor at the parish of San Bartolomé in Arcatao, El Salvador, where he celebrated his first Mass of Thanksgiving.