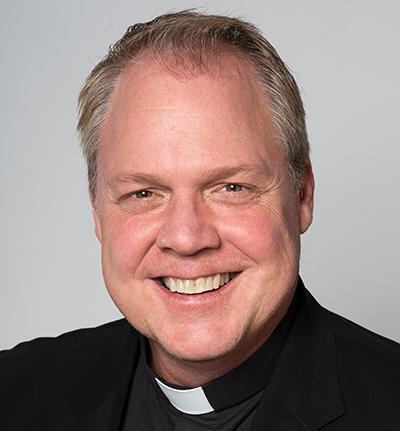 Fr. Siebert currently has several roles at LMU. He is on the part-time faculty of the School of Film and Television, works part-time with campus ministry and lives as a resident minister on campus. He is also the chaplain for the student worker program and primary caretaker for Buster, LMU’s therapy dog.

Fr. Siebert is the founder of Loyola Productions, a non-profit film, video and multimedia production company in Los Angeles, where he has served as president since 2000. He previously worked on the ABC/20 Century Fox television show “Nothing Sacred.” He wrote and directed the award-winning short films “At Last Goodbye” and “Out of Trust.” His experience has also included newsroom stints at WDIV NBC Detroit and WWL CBS New Orleans, as well as exclusively chronicling Pope Francis in Rome, Philadelphia and Washington, D.C.

Fr. Siebert entered the Society in 1984, was ordained a priest in 1997 and professed his final vows in 2009. He received an MFA in film production from Loyola Marymount University’s School of Film and Television. He also holds master’s degrees from the University of San Francisco and the Jesuit School of Theology of Santa Clara University. He is a member of the International Association of Documentary Filmmakers and the Producers Guild of America.

Fr. Scott Santarosa, SJ, provincial of Jesuits West, thanked Fr. Deck for his “generosity and great fidelity serving as rector of the Loyola Marymount Jesuit Community since 2014” and asked for prayers for Fr. Siebert as he prepares for his new mission. “I am grateful for his availability and generous service to the Society and our Province,” Fr. Santarosa said.