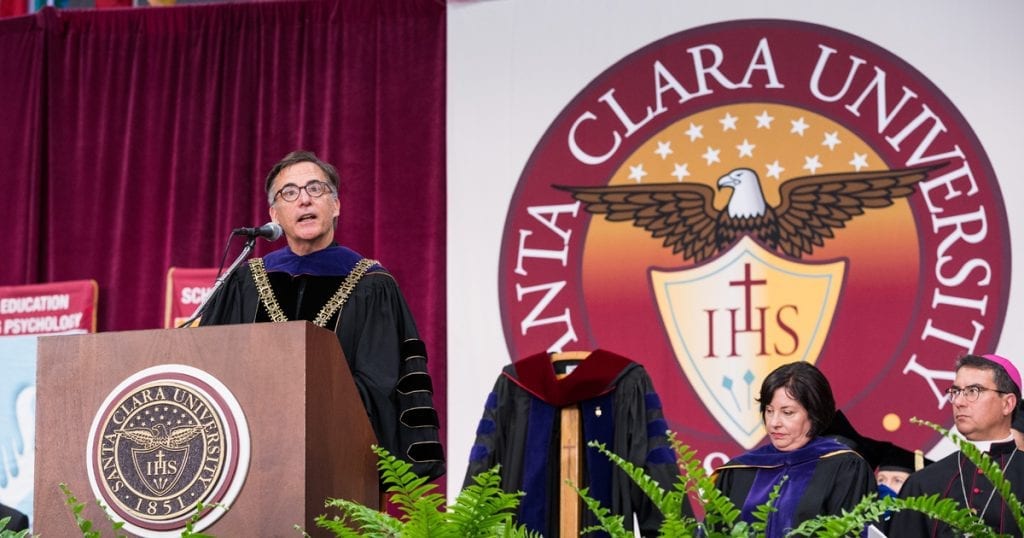 Reflecting on the words of Jesuit Anthony de Mello, “You sanctify whatever you are grateful for,” Fr. O’Brien expressed his deep gratitude to all those who have welcomed him to Santa Clara and the Bay Area.

“As I begin my service, I accept your welcome as a sacred trust. I will call upon you to help me and to counsel me in the years ahead.” He also thanked Fr. Michael Engh, SJ, whom Fr. O’Brien succeeded as president, for his friendship and support and for ensuring a smooth leadership transition. 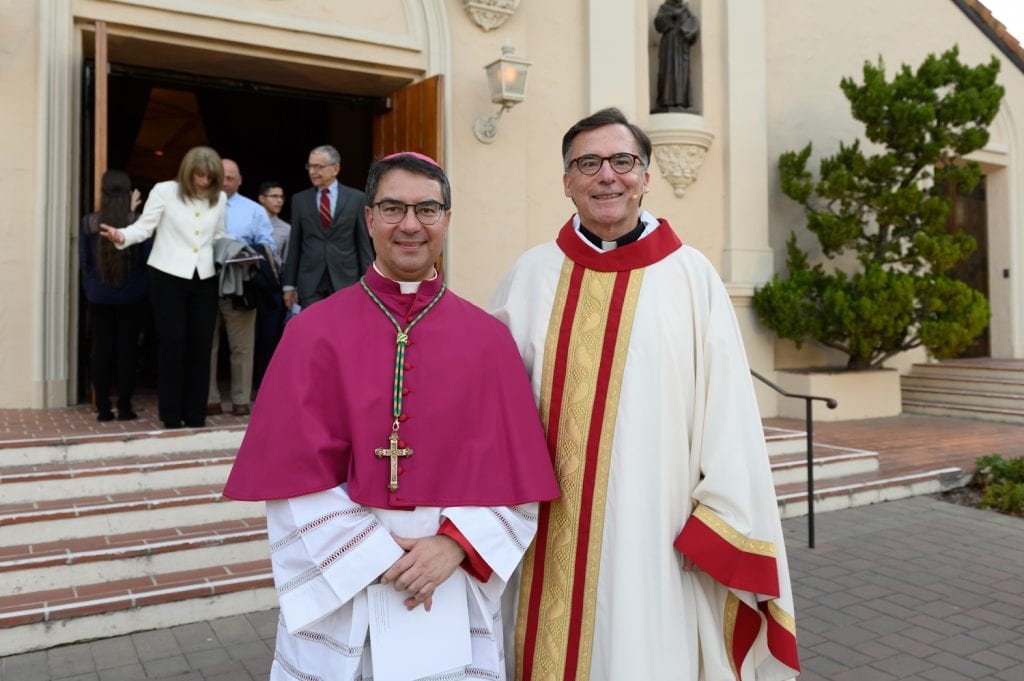 Jesuits West Provincial Fr. Scott Santarosa, SJ, a Santa Clara alumnus (’88), officially missioned Fr. O’Brien as head of the apostolic work. “Santa Clara University, as the oldest university west of the Rockies and as the Jesuit university of the powerful Silicon Valley, is uniquely poised to make Gospel values relevant and credible in our changing world.”

Fr. Santarosa continued, “Because of his integrity and his deep love for and loyalty to the church and the Society of Jesus, I have confidence that Fr. O’Brien will steadily and conscientiously work with the university’s Jesuit community, its rector Fr. Arthur Liebscher and with all of his generous colleagues — trustees, faculty, staff, students, alumni and friends—to help Santa Clara reach its full potential, as both an influencer and a change agent, all for the greater glory of God.”

After Fr. O’Brien’s missioning and investiture by Fr. Santarosa, Fr. O’Brien gave an inaugural address to the guests gathered at the Leavey Center on SCU’s campus.

Fr. O’Brien spoke of his vision of what Santa Clara could be as a university: “a place of generous encounter.” 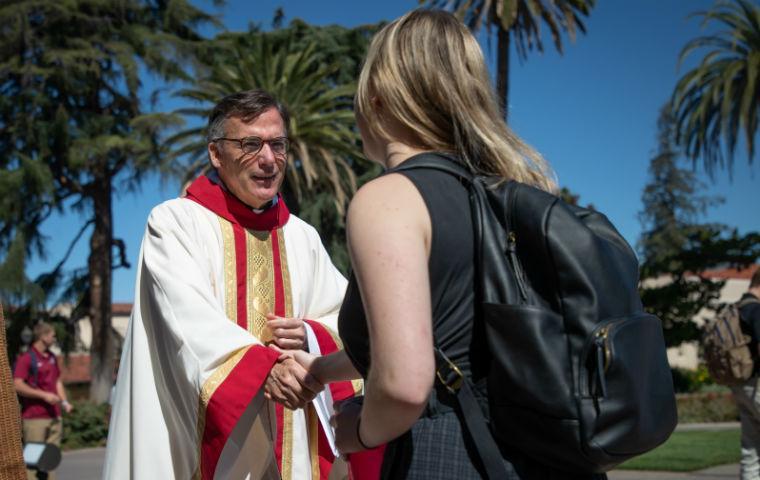 “A Jesuit education at Santa Clara is about encounter: engaging one another deeply and meeting the living God (whom we may call by different names) in surprising ways and in unexpected places,” he said. 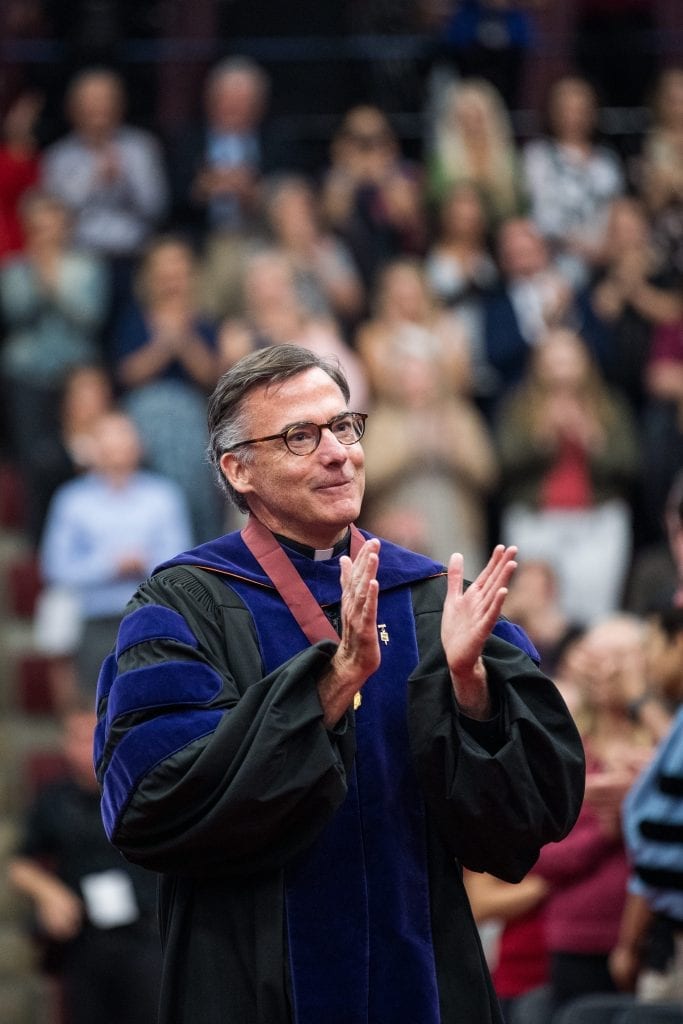 Fr. O’Brien said he stood before those gathered as a Jesuit “who wants to serve” and that he wished to safeguard and promote Santa Clara as a place of encounter steeped in truth, beauty and goodness.

He stressed that in Jesuit education, we seek to develop one’s imagination and senses to “‘find God is all things’ — to look and to hear and to feel deeply, so deeply that one discovers the transcendent and the holy everywhere.”

He added that “if we have really tapped the resources of our Jesuit tradition, we will see the beauty of each human person, including ourselves. We will find beauty not simply in those we know or in the physically attractive, but in the stranger, the migrants, the overlooked person, even the ones we too easily call our enemy.”

Fr. O’Brien stressed that Jesuit schools are marked by a concern not just for the development of students’ reasoning but their character. “That’s why we call our work here not just education but formation. … In short, we want to help people, and as we would add today, help our planet, our common home.” 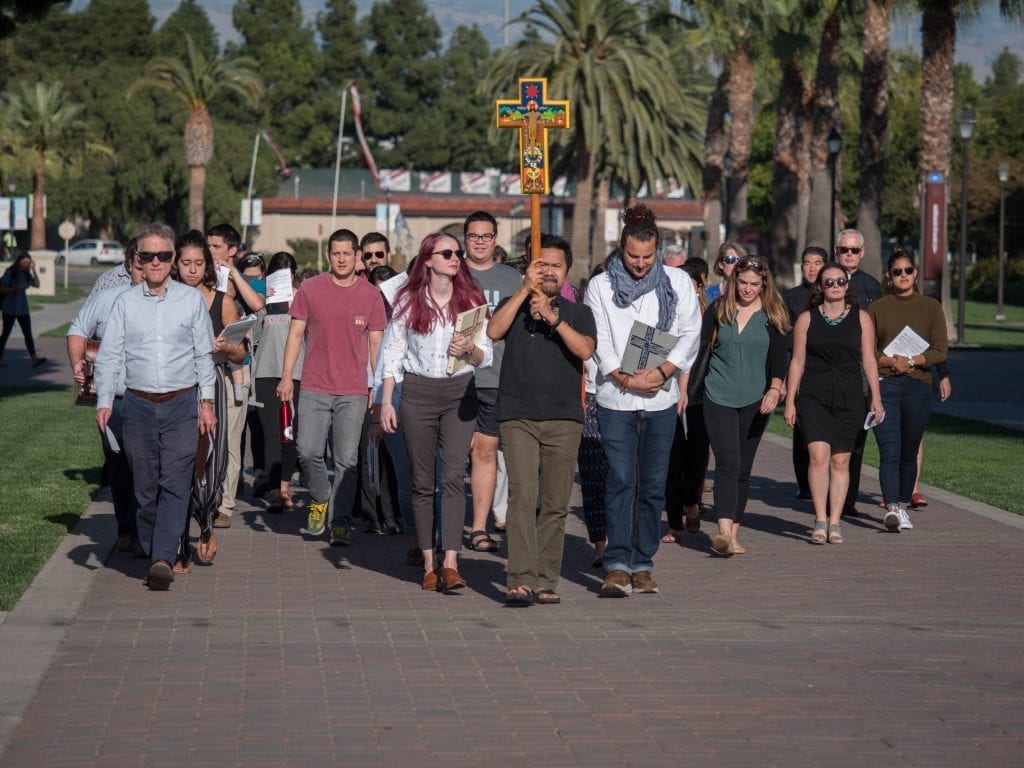 During inauguration week, a prayer service was held to pray for suffering at the border. Here, Eddie Ngo, SJ, processes with a cross from El Salvador.

Indeed, the SCU community lived these values out in the days prior to the ceremony by taking part a series of inauguration-related events, including a forum and a prayer service, both focused on the plight of migrants and immigrant families. Throughout the week, campus members were encouraged to contribute to a clothing drive for migrants. 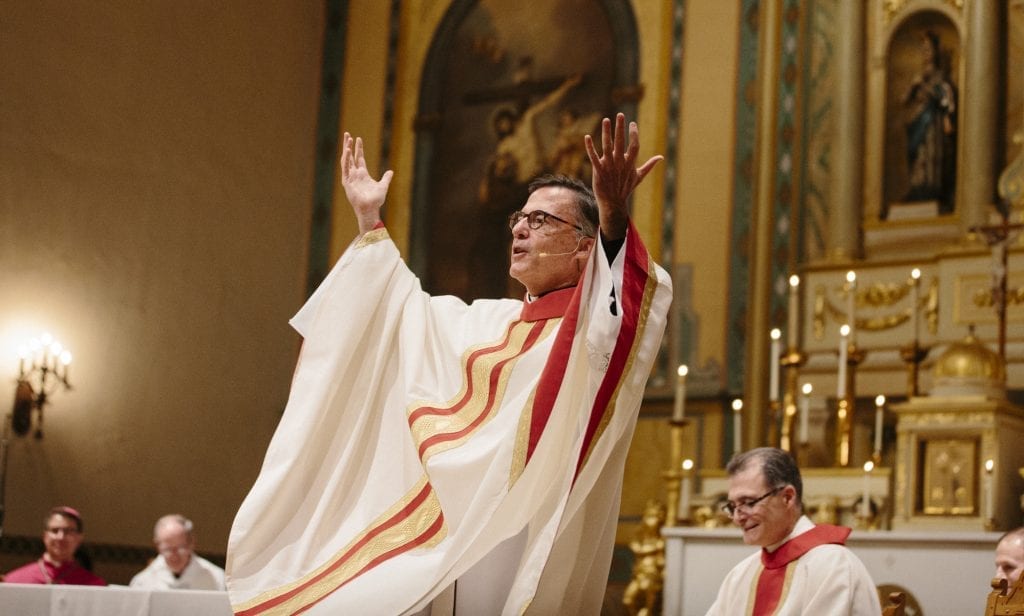 On October 10, the Santa Clara community celebrated an inaugural Mass at Mission Church.

The struggle of those fleeing conflict or seeking a better life reflects Fr. O’Brien’s deep commitment to vulnerable migrants and refugees, something that was nurtured during his years as a chaplain with the Jesuit Refugee Service and frequent visits to the Kino Border Initiative working with deportees along the border of Nogales, Mexico.

Before becoming president of SCU, Fr. O’Brien had served as dean of the Jesuit School of Theology of Santa Clara since 2016. He spent the previous eight years at Georgetown University, the last five as vice president for mission and ministry. Fr. O’Brien has also served on the boards of three Jesuit universities — Seattle University, Marquette University and Boston College — and on the faculty of the Jesuit Leadership Seminar, which helps form Jesuit university leaders from around the country. 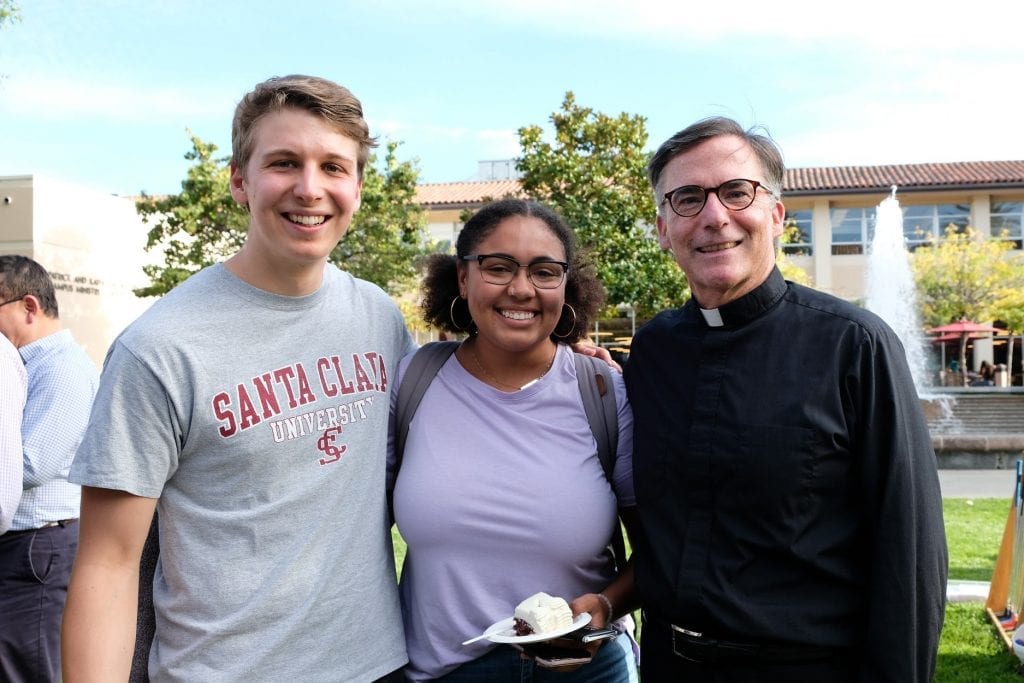