With a flurry of donor support, the Generations Capital Campaign exceeded its goal, saw all construction projects completed, and positioned the California Province to better serve the people of God through its approximately 40 ministries.

With the finishing touches of landscapers on a January afternoon, work at The Jesuit Novitiate of the Three Companions in Culver City, Calif., came to a close and signaled the official end of the California Province’s Generations Capital Campaign. Gone are the backhoes, concrete mixers, electricians, painters, and plumbers. Gone is the relentless noise and the pedestrian detours, part of the price paid for major construction projects that disrupt daily life. 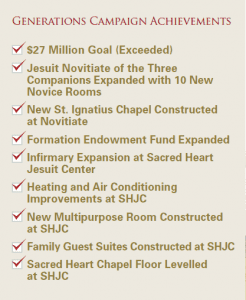 Though it was the gentle work of landscapers that signaled the end of the Campaign construction, the finish to the Campaign itself was anything but subtle. For the last few months of 2015 and early into 2016, Campaign fundraisers – buoyed by the generosity of donors – finished with a flourish, bringing in gifts large and small that carried the Generations Campaign past its $27 million goal.

With a quiet phase that began in 2012 and a public phase that kicked off in 2013, the Generations Campaign achieved all of its goals.

“It is only through the generosity of our donors that we were able to reach a level that was far beyond our initial planning.”

Today, life at The Jesuit Novitiate of the Three Companions is pleasantly quiet. Novices conduct their daily routine in an atmosphere that is both reflective and inspirational, ideal conditions for men who are beginning their journeys as Jesuit priests or brothers.

“We are extremely grateful to all of our benefactors for their kindness, generosity, and prayers,” said Fr. Stephen Corder, SJ, director of novices. “We remember them continually in our daily Masses and prayers here at the Jesuit Novitiate. I hope that they know that their gift makes a direct positive impact for the future of the Jesuits and for the life of the Church and the people whom we serve.” 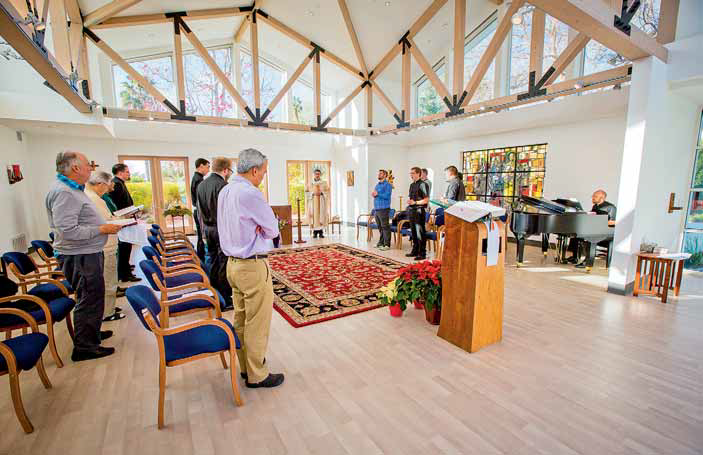 Perhaps the most visually apparent change at the Novitiate is the new St. Ignatius Chapel. Utilizing large windows to bring in natural light and with vaulted ceilings and open beam construction, the Chapel offers a reflective space that far exceeds in both tone and function the former chapel, a converted garage.

“We are very grateful for the larger chapel which is a very prayerful setting that is spacious and full of light thanks to the new architecture,” Fr. Corder said. “We are able to accommodate more seating, the acoustics are wonderful, and the large glass windows incorporate the beauty of nature with our daily prayer.”

The new, larger chapel and the expanded Novitiate certainly figure to get much use. The Novitiate, which serves both the California and Oregon provinces, expects to house more men who are on the path to becoming Jesuit priests or brothers, in no small part because of the example of Pope Francis, the first Jesuit pope.

“Thanks to the generosity of our benefactors, we are now able to accommodate a growing number of Jesuit vocations and can house up to 30 novices,” Fr. Corder said. “We have been good stewards of our novitiate for the West Coast which is located in an urban setting with many opportunities for ministry and community service in Los Angeles and beyond. After 23 years at this location, it was a good time to renew and to expand the buildings of the novitiate campus.”

“Thanks to the generosity of our benefactors, we are now able to accommodate a growing number of Jesuit vocations and can house up to 30 novices.” 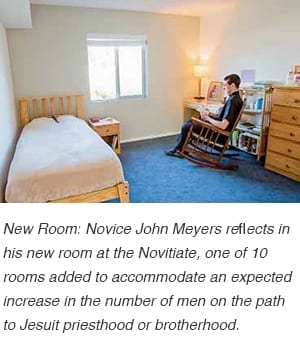 With the Campaign construction and active fundraising now complete, the California Province turned to celebratory events to thank the donors who made the construction projects a reality. Celebrations were held at The Jesuit Novitiate of the Three Companions on March 19 and on April 16 at the Sacred Heart Jesuit Center in Los Gatos, where the bulk of construction and renovation was completed nearly a year ago.

“The success of the campaign and the support of our donors still leave me in awe,” said Fr. Michael F. Weiler, SJ, provincial of the California Province.“As we began the process for setting our Campaign goals, we reassessed the needs of the Province and realized that we needed to extend the goal well beyond our original estimate. It is only through the generosity of our donors that we were able to reach a level that was far beyond our initial planning.”

Early Campaign goal estimates came in at $12 million, but with the need to expand the Novitiate and increase the fund for Formation – the 10- to 13-year process of discernment, education, and training for Jesuit priests and brothers – it became apparent early on that the Campaign goal would have to be raised.

Many Jesuits throughout the Province contributed to the success of the Generations Campaign. Several played key roles in arranging visits with benefactors who have been touched by the work of Jesuits. Others called on family members for support. Others would routinely walk up to the province’s advancement office to offer birthday or Christmas cash gifts they had received, asking that the monies be donated to the Campaign to support their brother Jesuits and the works of the Province.

Fr. Weiler was grateful, also, to Generations Co-Chair John M. Sobrato for his leadership to the campaign as well as the Jesuits and lay partners who served on the Campaign’s various advisory committees to strategize, offer suggestions for donor prospects, and participate in asks of individuals and foundations. 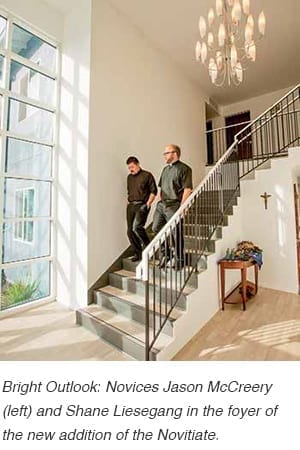 For his part, Sobrato, who along with his mother and father lent significant financial support to the campaign, was delighted with the outcome.

“From the outset, I wanted to ensure that this was a successful campaign,” Sobrato said. “Working with the Jesuits who have touched generations of lives was an honor. Their impact is widespread and lasting. Achieving all of our campaign goals is truly remarkable.”

The Campaign’s other co-chair, Fr. John Lo Schiavo, SJ, passed away last May, just months after he moved from his long-time home at his beloved University of San Francisco. Though his time on the job with the Campaign was limited, he brought in several major Campaign gifts through his relationships and was instrumental in the planning and organization of the Campaign from its initial phases.

“There were many people behind the scenes who made our campaign a success,” said Fr. Weiler. “They are the unsung heroes whose guiding hand helped us exceed our ambitious goal. To them, we are truly indebted and grateful.”