May 6, 2016 — Jesuit Father Greg Boyle, founder and executive director of the gang intervention program Homeboy Industries, has received the 2016 Humanitarian of the Year award from the James Beard Foundation. The national culinary arts organization presented Fr. Boyle with the Beard medallion on May 2 in Chicago. 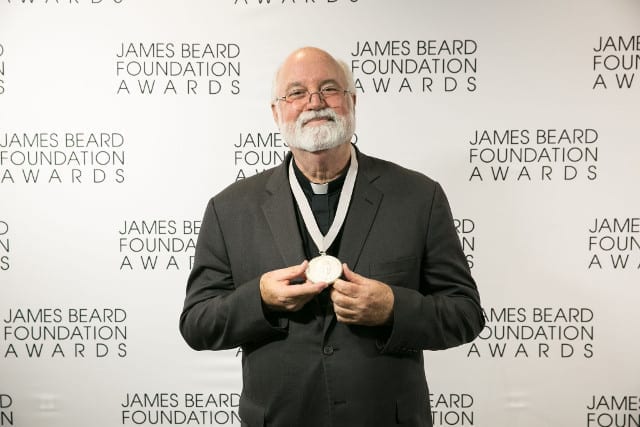 Named for late cookbook author and teacher James Beard, the James Beard Foundation promotes America’s culinary heritage through programs such as educational initiatives, food industry awards, scholarships for culinary students and other events. The organization’s Humanitarian of the Year award is given to an individual or organization whose work in the realm of food has improved the lives of others and benefited society at large. Fr. Boyle did just that with the launch of Homeboy Bakery in 1992, where former rival gang members work side by side and learn both business and baking skills.

“I am honored and humbled by this recognition,” Fr. Boyle said, “but also heartened, because it acknowledges, as well, a community on the margins that has long been demonized. This award, then, imagines a circle of compassion outside of which no one is left standing.”

Fr. Boyle began serving as a pastor at Dolores Mission Church in Los Angeles in 1986, at the time the poorest Catholic parish in the city, located near two large public housing projects and the territory of numerous rival gangs. The experience at Dolores Mission inspired him to start Homeboy Bakery nearby. Its success led to additional enterprises with the Homeboy brand, including Homegirl Café & Catering, Homeboy Diner in Los Angeles City Hall, and a retail presence at farmers’ markets throughout the greater Los Angeles area.

Homeboy Industries is now the largest gang intervention, rehabilitation and re-entry program in the world, helping more than 10,000 formerly gang-involved and previously incarcerated men and women each year. They are welcomed into a community and offered access to a variety of services, including employment opportunities, legal help and even tattoo removal.

Among a wide array of notable accolades, Bon Appetít magazine named Fr. Boyle Humanitarian of the Year in 2007, and he was a featured speaker at the White House Conference on Youth in 2005 at the personal invitation of First Lady Laura Bush.

“We are very excited to honor these two outstanding individuals whose contributions to not only the food and beverage industry, but society as a whole, are boundless,” said Susan Ungaro, president of the James Beard Foundation. “Both Leah and Father Greg have impacted the lives of so many people, and we know that their legacies will continue to inspire our community for decades to come.” 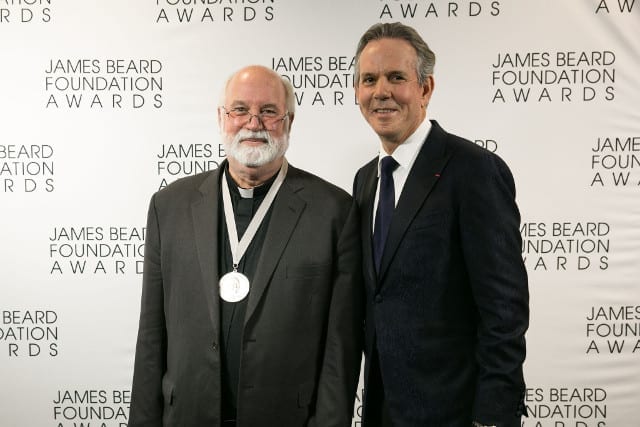 “Homeboy Industries wants to be now what the world is called to be ultimately: a community of kinship against forgetting that we belong to each other,” Fr. Boyle said. [Source: James Beard Foundation]