May 1, 2020 — Coming this summer is a new Jesuits West vocation team made of up of eight Jesuits. The team will be headed by Fr. Radmar Jao, SJ, as director and Fr. Julian Climaco, SJ, as promoter. Both will be full time and based in Los Angeles.

When he announced the new team, Jesuits West Provincial Fr. Scott Santarosa, SJ, noted that they will largely live and work together in pairs, so they can support each other and help generate new and creative approaches to vocation promotion.

“I also believe seeing Jesuits work together is compelling for candidates, as community is something that is very much longed for today,” Fr. Santarosa said.

He also thanked the current team, Fr. Christopher Nguyen, SJ, director of vocations, and Fr. Chanh Nguyen, SJ, vocation promoter, for their service over the past six years.

Calling for “all hands on deck,” Fr. Santarosa stressed the importance of Jesuit vocation promotion: “We want to make sure that we do all we can to do our part as God calls all of us to help build his kingdom.”

Fr. Jao, who will serve as director, referenced John 21:6 in describing the approach as “casting our net on the other side of the boat.”

The idea is that with a larger, dedicated team they will be able to “broaden that catch and cast a wider net,” Fr. Jao said.

While numbers to the priesthood are down, Fr. Jao is not discouraged. “I truly believe that the Spirit is still calling people. We will find new and broader ways to attract and to accompany men and to expose them to the joy of religious life.”

Fr. Jao said that the COVID-19 pandemic may be a catalyst for some. “I think more and more people are starting to realize that we need each other, that we need to help one another and that we need to be in this together,” he said.

“My hope is that when the pandemic is over, and we return to a new normal, more men will be available to investigating what is happening in their heart and how God is inviting them to something deeper.”

We invite you to meet the new team: 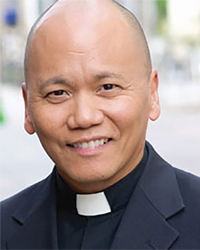 Fr. Radmar Jao, SJ, comes to the job of director of vocations with good experience. He previously served in the former California Province as a vocation promoter for two years after he was ordained to the priesthood in 2011. Currently, he is finishing his tertianship — the final formal period of Jesuit formation; prior to that he served as a campus minister at St. Paul’s Catholic Student Center at Boise State University in Idaho.

Before becoming a Jesuit. Fr Jao was an actor and appeared in “Seinfeld,” among other roles. As a Jesuit, he documented his “Path to the Priesthood” in a video series before his ordination. In the series, he talks about why he became a Jesuit: “I think it taps into a deep desire for something more, for something greater.” He credits his great grandmother teaching him to pray in Spanish when he was just three years old as planting the seeds for his vocation. 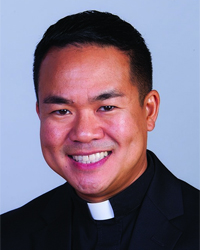 Fr. Julian Climaco, SJ, will serve as vocation promoter. After being ordained in 2015, Fr. Climaco served as associate pastor of St. Joseph Parish in Seattle for three years before beginning his tertianship in 2019. Fr. Climaco was born in the Philippines and immigrated to the United States with his family when he was 10. Before joining the Jesuits, he worked as a nurse.

Fr. Climaco discovered his vocation after watching the film “The Passion of the Christ” and realizing he wanted to give something more to the church. On the eve of Palm Sunday 2004, Fr. Climaco received an email about the film, which included a link to the Jesuits in Asia website, where he read about the Society and found his calling. 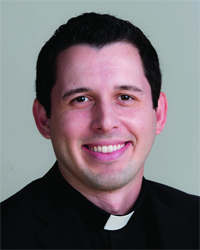 Fr. Andrew Laguna, SJ, who will be a part-time promoter in the South Bay area of California, was ordained in June 2019. After ordination, he studied Spanish in Mexico for several months before starting his current assignment as an associate pastor at Most Holy Trinity Church in San Jose. As an undergrad at the University of California, Irvine, Fr. Laguna was pre-med but decided during his senior year that he did not want to be a doctor and began considering a vocation to the priesthood after learning more about Ignatian spirituality and the Society at the University Catholic Community.

He said his Jesuit friendships are one of the greatest gifts of his own Jesuit vocation. “I have many brothers who accompany and support me in this life.” 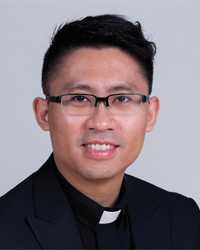 Fr. Francis Nguyen, SJ, who will be a part-time promoter in the South Bay along with Fr. Laguna, was also ordained in June 2019 and now serves as an associate pastor at Most Holy Trinity Church in San Jose. Fr. Nguyen was born in Vietnam and immigrated with his family to Seattle when he was 6. His desire to join the Jesuits was inspired by the lives of the Vietnamese Martyrs, the love of his grandfather and the joy of the Jesuits in the Seattle University community.

His Jesuit formation included giving retreats through the Ignatian Spirituality Project for people experiencing homelessness in Chicago and teaching math and theology and working in campus ministry at Seattle Prep. 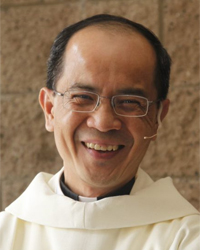 Fr. Tran said that the greatest grace of his Jesuit vocation is being able to “encounter many faces of God” in his various ministries. 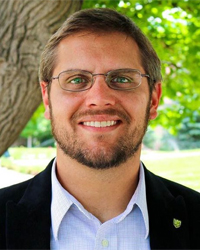 Kyle Baker, SJ, will also serve as a part-time promoter for Boise. He is currently in philosophy studies at Fordham University in the Bronx, New York. Before joining the Jesuits in 2016, Baker worked as an elementary school teacher, a coach, an educational consultant and as chief of staff at Carroll College in Helena, Montana, his alma mater.

Baker described his own vocational discernment as “a process of acknowledging that God loved me and trying to figure out how I would live out my life in response to that love.” 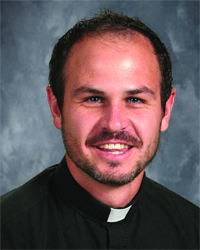 Greg Celio, SJ, who will be ordained to the priesthood this year, will serve as a part-time promoter in Seattle. Celio has a bachelor’s in history and a master’s in education from the University of Notre Dame and taught at Catholic schools in Nashville before joining the Jesuits in 2009. During his Jesuit formation, he taught at Bellarmine Preparatory School in Tacoma, Washington, did first studies at Saint Louis University and studied Spanish in Guadalajara, Mexico. He is currently studying theology at Regis College of the University of Toronto. 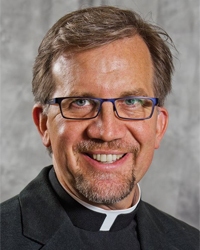 Fr. Matthew Pyrc, SJ, will also serve as a part-time promoter in Seattle. He is currently in tertianship in South Africa. Before entering the Society in 2006, he worked for 10 years with the Spokane Public School System on a dropout prevention program for underserved youth. Since becoming a Jesuit, Fr. Pyrc has worked in campus ministry at Seattle University and taught and was director of liturgy at Jesuit High School in Sacramento.