When Santos Flores-Alcaide listens to Cyndi Lauper’s hit ballad “Time After Time,” he hears the chorus as a love letter from God. He explains his thinking simply: “If you’re lost, you can look for God.”

“Cyndi Lauper wrote it as a love song, but we use it in here as a God song,” adds Jennifer Kelly, who is seated next to Santos. We’re gathered in a sterile white and grey room, which Jennifer has spruced up with a flowery tablecloth, electronic candles and icons of the Sacred Heart. “Here” is the Mental Health Unit of the Monroe Correctional Complex (MCC)—a prison about 30 minutes northeast of Seattle.

Santos is incarcerated at MCC. He met Jennifer a few years ago, at one of the Ignatian retreats that she runs in Washington state prisons. The retreats are part of a program called the Jesuit Restorative Justice Initiative Northwest (JRJI NW), which offers spiritual support, guided retreats and other prayer services designed specifically for incarcerated individuals.

For Santos, Jennifer’s singing is the best part of JRJI NW’s programs. An accomplished musician with a glassy smooth voice, Jennifer has found that music is a powerful bridge, connecting her and the people attending her retreats.

Cyndi Lauper’s verse may be an unlikely spiritual vehicle, but the song carries a weighty power for Jennifer and Santos. “I think, Santos, the reason you and I know [this song] so deeply is because prison is full of the one God wants to find,” Jennifer tells him.

I can see it in his smile, in the way he hums along—how this song transports Santos into a space beyond these impenetrable walls. It’s more than escape, though. Cached in this song’s lofty notes is a mutual understanding between Jennifer and Santos. A musical nod that says, I too have lost and been lost. I have wanted desperately to be found.

Armed with my recorder and camera, I’m shadowing Jennifer to document a full day of JRJI NW programming at MCC, from one-on-one visits to prayer circles and communion services. I’ve visited prisons before, and the experience often leaves me heavy with melancholy or frustration. But by the time I leave MCC at nightfall, I feel nourished, hopeful. A tremendous and special spirit thrives in the community gathered through JRJI NW.

Fittingly, JRJI NW was born out of a concert. In 2015, Jennifer’s band played what was meant to be a one-time concert at Monroe Correctional Complex. During setup, Jennifer got to chatting with three incarcerated men—Bill, Mark and Dylan—who were helping set up amplifiers and microphones. She mentioned her previous experience with Ignatian retreats. Suddenly, Bill lit up: “An Ignatian retreat? I’ve been praying for one for years!”

Jennifer knew she had to do something. She reached out to Fr. Mike Kennedy, SJ, who founded the Jesuit Restorative Justice Initiative (JRJI) in California. He invited her to shadow his work in California prisons.

True to its name, JRJI follows a framework of restorative justice that sees crime as a fundamental violation of human relationships. While the U. S. criminal justice system largely emphasizes punishment, restorative justice seeks healing for offenders, victims and the communities impacted by crime. Fr. Kennedy believes that spiritual companionship is a key resource in this healing. Through retreats and educational programming, JRJI creates spaces where incarcerated people can “place themselves in the presence of a loving God who sees them for who they are—not mistakes, but rather individuals in need of healing.”

When Jennifer arrived in Los Angeles to shadow Fr. Mike, thousands of people were participating in JRJI California programs, but the model hadn’t expanded beyond the state. After a year learning from Fr. Mike, Jennifer returned to Seattle, eager to bring Ignatian retreats to the men she met at MCC.

The need was acute. According to the Washington State Institute for Public Policy, 33% of people released from Washington prisons will be locked up again within three years. Once released, they face a barrage of challenges from finding affordable and safe housing to getting a job and reconnecting with loved ones. Often, there’s a problem of perception: People who do time are seen as less than human, hardened and devoid of empathy. That’s why so many are drawn to JRJI’s programs.

Prison programs often focus on quantifiable measures—such as job and skills training and continuing education—all of which are crucial to transformation. But restorative justice is also concerned with rebuilding relationships. That kind of healing is largely unquantifiable.

“We don’t heal in our intellect,” Jennifer explains. “We heal in our memory, our hearts and our feelings.” While Jennifer acknowledges healing is ultimately self-led, JRJI provides spiritual tools, such as memory meditation and Ignatian conversation models, to help people in that process.

In 2016, along with supportive inmates like Dylan and Bill, Jennifer piloted the MCC’s first Ignatian retreat. Over 28 men attended, many of whom weren’t Catholic or even Christian. Convening interfaith spaces is no small task in prison, where religious affiliation is often divisive. Dylan, for example, is Protestant, and he didn’t know much about Ignatian spirituality but the idea of a full-day retreat intrigued him. Most of MCC’s weekly religious services are an hour long. To have a full day of prayer, community and live music felt luxurious.

The program quickly snowballed, and subsequent retreats capped out at 60 attendees. The retreats created safe environments, where people are not confined by labels like inmate or chaplain. “What the Ignatian retreats did was allot us that time in a secure fashion to be vulnerable with each other,” says Dylan. Prison prioritizes the immediate, often out of self-protection. “We’re thinking about, ‘What’s for dinner today?’” Dylan explains. “We’re not given a lot of opportunities to say, ‘How did this make you feel?’”

Ignatian meditation probes deeper. Those early retreats pushed Dylan to look inside himself in a way he never had before and then to share those reflections with others. The community became crucial to Dylan, and in the intervening six years, he hasn’t missed a single retreat.

Now, JRJI NW is an independent ministry of the Jesuits West Province, and it’s expanding rapidly. This summer, the organization hired its second full-time employee, Fr. Joe Kraemer, SJ. Alongside Jennifer as director, the pair is leading retreats and Ignatian programming in four prisons and one jail across Washington.

Who God Wants to Find

When Jennifer finishes singing “Time After Time” for Santos, she says simply, “It’s true. I feel when I sing it that God’s singing to you, Santos. The fact that you take it in and that you know God loves you. I just think it makes God really happy.”

Santos is silent for a few seconds, choked with emotion. “That’s nice,” he finally replies. “That’s a good feeling.”

I don’t think many people have told Santos that God finds joy in him. I remember what Jennifer said earlier, that prison is full of people who God wants to find and that God delights in finding them. It’s a radical notion. Whether inside or outside of prison, we all wander, lost in the wilderness of our mistakes. And we all crave love and forgiveness—most of us just don’t know how to ask for it. Or we’re too proud to admit it.

The JRJI NW program was created for the people who do ask for help, who are looking to find themselves and God. Many incarcerated people feel themselves defined by the worst moments of their lives, moments that they are trying to reconcile or heal daily. But to Jennifer, they are not reduced to a crime or a sentence. She sees them through God’s eyes—as sources of joy.

“I love this work so much and I can’t believe I got called to it,” Jennifer says. Heart on her sleeve, she begins to cry when I ask her what JRJI NW means to her.

“People tell me how our style of programming has brought them healing and personal growth, changed their lives,” she explains. “That is humbling and moving and stunning and exactly what I would have hoped to give my life to when I first got my theology degree decades ago.”

MegAnne Liebsch is the communications manager for the Office of Justice and Ecology at the Jesuit Conference of Canada and the United States.

The Hard Work of Forgiveness 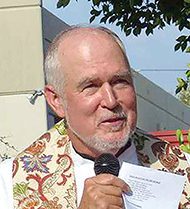 Prior to founding JRJI, Fr. Kennedy was pastor of Dolores Mission in Los Angeles, where he developed a passion for working with the poor and marginalized and met countless families whose lives were torn apart by gang violence and crime.

Through prayer, education and advocacy, JRJI strives to heal broken relationships with those who are incarcerated and their families—as well as victims of crime and their families. JRJI facilitates restorative justice spiritual retreats using Ignatian meditation based on the Spiritual Exercises of St. Ignatius of Loyola in California state prisons and juvenile halls to help incarcerated communities recognize God’s presence in their lives.

Fr. Kennedy, who describes the work of JRJI as “helping prisoners participate in the hard work of forgiveness and transformation,” says, “We need to minister to people in prison. We need to put time and energy into it because that’s where God is.”

After a difficult almost two-year period of Covid shutting down all prison visits, JRJI has resumed a more regular schedule of retreats.