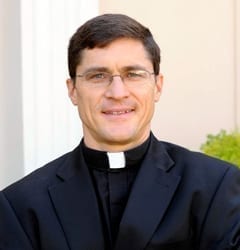 Jesuit Father Scott Santarosa is taking on a new assignment as the provincial of the Oregon Province Jesuits.

July 11, 2014 — When Jesuit Father Scott Santarosa was a kid growing up in Sacramento, California, in the late 1970s, he played Little League, delivered newspapers and rarely watched game shows. But he still understood the mystique of the “prize behind door number three.” The mystery door popularized on the long-running television show “Let’s Make a Deal” is, for him, a powerful metaphor for the greatest gift of his Jesuit vocation. And it all began in a high school Spanish class.

At Sacramento’s Jesuit High, Fr. Santarosa met the Jesuits for the first time and also began studying Spanish. The son of a civil engineer and a nurse, Fr. Santarosa was raised in a Catholic family, one that attended Sunday Mass together and then discussed the priest’s homily on the way home from church. Even at a young age, Fr. Santarosa preferred a spirituality that was “well-grounded and not too otherworldly. If it got too churchy, it was a turn off for me.” 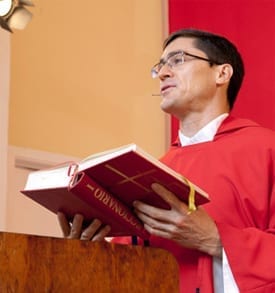 The Jesuit teachers and administrators at Jesuit High were a natural fit. They laughed, made jokes, listened to Freddie Mercury, cheered at sporting events and, most importantly, “They were happy.”

Unconsciously following in his dad’s footsteps, Fr. Santarosa studied civil engineering at Santa Clara University, but a trip to Mexico had a tremendous impact on his well-planned future. Accompanied by a Jesuit scholastic from Santa Clara, Fr. Santarosa spent a few days working with the poor in Tijuana, visiting prisoners and experiencing the devastating poverty of people who were living in cardboard houses. “It just blew my mind that people lived like this and still really felt God’s love. It challenged my concept of what it means to be a human being, and I liked that challenge.” He also liked speaking Spanish. 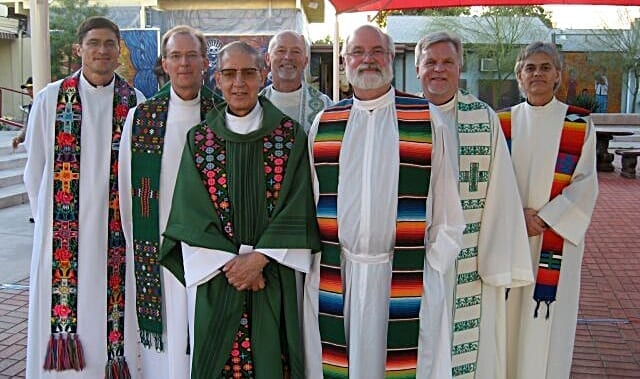 After graduating from Santa Clara in 1988 with a degree in civil engineering, Fr. Santarosa was intent on doing something more with his life, so he signed up to serve for one year with the Jesuit Volunteer Corps. He ran an after-school program in a low-income housing project in Newark, New Jersey, and resolved not to make any big decisions about his future. But God had other plans, and by the end of that year, Fr. Santarosa was headed for the Jesuit novitiate in Santa Barbara, California. 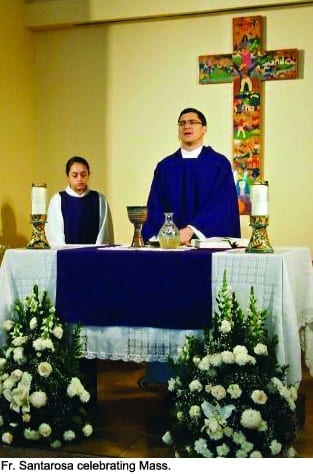 Heading next for studies at Fordham University in New York, Fr. Santarosa was intent, as Saint Ignatius instructed, to set the world on fire but remembers “being ready to change the world, and you’re sitting in a classroom studying St. Thomas Aquinas. Boring.” But when he wasn’t poring through Aristotle and Plato, Fr. Santarosa was practicing his Spanish with the cook at the Jesuit community.

Assigned next to Bellarmine College Preparatory in San Jose, California, Fr. Santarosa taught theology while developing a tutoring program for students to teach English to day laborers. He then went to the Jesuit School of Theology in Berkeley, California, where he asked to spend his fourth year of theology studies in Mexico City so he “could preach in Spanish without using notes.”

Following ordination, Fr. Santarosa was assigned to Verbum Dei, an inner-city high school in the Watts section of South L.A., where he taught religious studies, directed campus ministry and served as acting principal. The five-year assignment was difficult. “Half the time the kids were more in charge than we were. It was hard, but I never doubted that we were needed there. There’s a lot to be said for feeling like you’re needed.”

In 2007, Fr. Santarosa was assigned to his “dream job” as pastor of Dolores Mission, a Latino parish in East L.A. A low-income area surrounded by housing projects, Dolores Mission sits in the crosshairs of territory controlled by two rival gangs. When the gangs are warring, they “shoot real bullets, and our people are caught in the middle.” While he wasn’t afraid for his own safety, he worried about his parishioners. 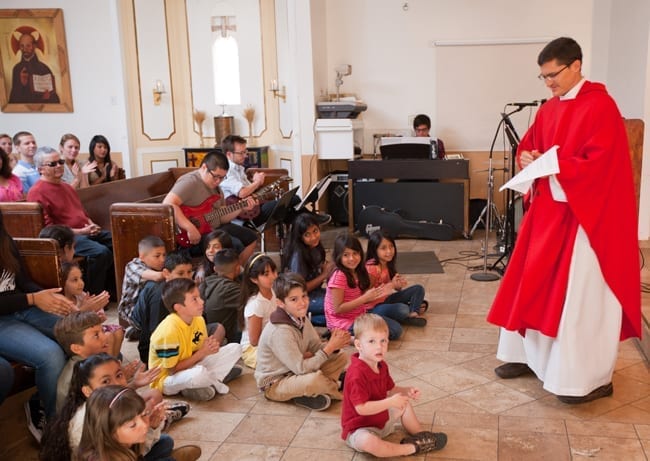 And yet, it was a deeply consoling time. He was speaking Spanish full time and being invited into peoples’ homes and into their lives, even as they faced unimaginable tragedies. “It was such a place of privilege. 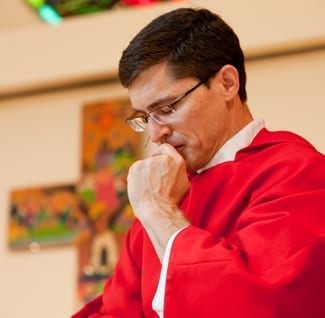 “You speak Spanish, and that’s the prize behind door number three. The prize is entrée to these people’s lives. They teach you about what it means to be an authentic human being. I still feel that by speaking Spanish and getting to know people who come from this other world — from Latin America — that they expose me to something true about who God is. When I am with them, I feel like I am on holy ground. God’s truth through the people feeds me, and I hunger for it.”

After seven and a half years at Dolores Mission, Fr. Santarosa is taking on a new assignment as the provincial of the Oregon Province of the Society of Jesus. His job is to take care of the approximately 200 Jesuits of the Northwest — to meet with them, to understand how God is working in their lives and to mission and support them.

It’s a new door with an undiscovered prize, but he is confident that it will nourish him as well.

To learn more about Fr. Santarosa, watch the video below from The Ignatian Network.