These six men have been in Jesuit formation for 10 to 12 years in preparation for their ordination. We invite you to get to know them below. 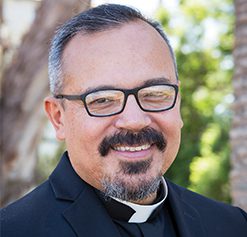 Born and raised in Fullerton, California, Manuel Chavira Jr., SJ, served in the U.S. Marine Corps and worked for nearly 20 years as an oil refinery operator in Southern California before joining the Society of Jesus. Deciding on a career change, Manny left the refinery and enrolled at UC Berkeley, where he majored in philosophy as preparation for attending law school. However, a “Come and See” event that he attended, held by the Jesuits at the nearby Jesuit School of Theology, changed his law career plans, and he entered the Jesuit novitiate after he received his philosophy degree.

“Before I was a Jesuit, there was always a sense of give and take to my happiness,” says Manny. “I was most happy when I was given something in return for what I gave or when I was given something for free, like the love my parents showed me. Yet as a Jesuit, I not only experience happiness but a joyfulness that comes about because I expect nothing in return for what I am trying to give. All I am trying to do these days is point to Christ.” 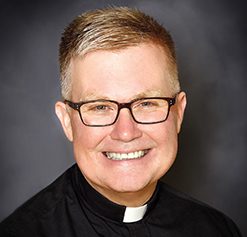 Joseph M. Kraemer, SJ, was born and raised in Richmond, Indiana, and met his first Jesuit vocation director at 13, after he expressed some curiosity about the priesthood. He attended Hillsdale College in Michigan and majored in English. After graduation, he worked at the Shakespeare Theatre at the Folger in Washington, D.C., the Juilliard School and the Lincoln Center. Thirty years after meeting the Jesuits, Joe joined the Society of Jesus in Los Angeles.

During his Jesuit formation, Joe did prison ministry with the Jesuit Restorative Justice Initiative, lived in a L’Arche community in Seattle with people who have intellectual disabilities and did fundraising with the Jesuits West Province Advancement Office. Before ordination, Joe will earn his Master of Divinity degree from the Jesuit School of Theology of Santa Clara University. After ordination, he will return to prison ministry, working with the Jesuit Restorative Justice Initiative NW, based in Seattle.

“God caught me and held on,” is how Joe sums up his vocation story in six words. His time serving at the L’Arche community was especially meaningful to him. When it was time to leave, saying goodbye to the friends he made taught him a “particularly Jesuit” lesson: “Jesuits have to let go a lot. It’s never easy, but love is a generous teacher.” 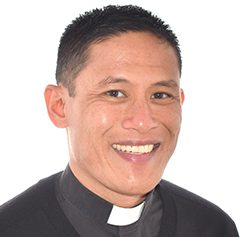 Michael Manalastas, SJ, was born and raised in Thousand Oaks, a suburb outside of Los Angeles. After graduating from UC Berkeley, he began his career at PricewaterhouseCoopers in San Francisco, where he met the Jesuits and the faint whisper of becoming a priest began. Mike ignored the call as best as he could for 10 years before quitting his job and traveling the world. When he returned, Mike knew he wanted to meet God everywhere, so he entered the Jesuit novitiate.

As a Jesuit, Mike taught and coached at Bellarmine College Preparatory in San Jose, California, studied theology and learned Spanish in Madrid, and taught at Verbum Dei High School in Los Angeles. His first assignment as a priest will be as associate pastor at Blessed Sacrament Church in Hollywood, California.

“We Jesuits are always trying to read the signs of the times, feeling for the pulse of society, looking for what’s relevant so that we can then serve others in a profound and real way,” Mike says. “In doing so, it requires creativity, change and being adaptive. Which means I might be dedicated to teaching in a high school for a few years and later dedicated to serving immigrants at the border. It means that I might be dedicated to working with the sick and infirm during one phase of my Jesuit life, then during another phase in a ministry dedicated to young adults. The opportunities to help others, to serve, are unlimited and so are our borders, where we’re called to be ready to go anywhere in the world where there’s a need.” 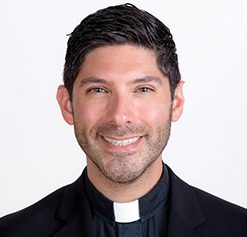 Daniel A. Nevares, SJ, was born and raised in Houston and is a graduate of Strake Jesuit College Preparatory and Texas A&M University. After college, Dan joined the Teach for America (TFA) corps, and during the subsequent years in TFA and beyond, he taught upper elementary school within the Glendale Elementary School District in Arizona. He entered the Society of Jesus in 2011 after discerning with the former California Province while living in Phoenix.

During his Jesuit formation, Dan taught at Gonzaga Preparatory School in Spokane, Washington; served as a deacon at St. Perpetua Parish and School in Lafayette, California; and encountered the international nature of the Society through language immersions in Bogota, Colombia, and Cochabamba, Bolivia. After his ordination, he will return to Spokane to serve as the parochial vicar at St. Aloysius Gonzaga Parish and School.

“I greatly admire how God calls Jesuits to utilize their unique gifts, talents and desires to serve the people of God in a multitude of ways,” Dan says. “I’ve been inspired by many of these men to serve as their companion in this least Society to advance the kingdom of God together.” 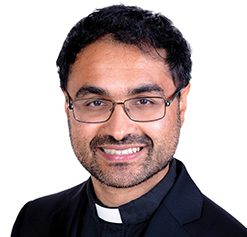 Lucas Sharma, SJ, was born in Kathmandu, Nepal, and was adopted when he was six months old. He grew up in Olympia, Washington, and is the oldest of four children. He earned a bachelor’s degree in sociology and economics from Gonzaga University. Lucas then worked as a Jesuit Volunteer at Bread for the City in Washington, D.C.; as a legal clinic coordinator representing clients in Social Security court; and did affordable housing advocacy. He met Jesuit scholastics while studying sociology at Loyola University Chicago, and after finishing his master’s degree, he entered the Society of Jesus in 2012.

As a Jesuit, Lucas worked as a chaplain at Eastlake Juvenile Hall and tutored children at Dolores Mission School, both in Los Angeles. For regency, he taught sociology at Seattle University and was a research fellow at the university’s Institute for Catholic Thought and Culture. Before ordination, he will complete a Master of Divinity degree at the Jesuit School of Theology of Santa Clara University in Berkeley, California. Upon ordination, Lucas will work for St. Ignatius Parish in San Francisco for the summer and move to San Diego in the fall to pursue a Ph.D. in sociology at the University of California San Diego.

“Ignatian spirituality has opened my heart and mind to see how profoundly and radically God looks into each of our hearts and sees that we are created good, in God’s image and likeness, and desires that we share this with the world,” says Lucas. “Experiencing God’s tender compassion and mercy, I feel compelled as a Jesuit to share that with others, in order to help others feel that same way so that one day we will be one family, free of exclusion and marginalization.” 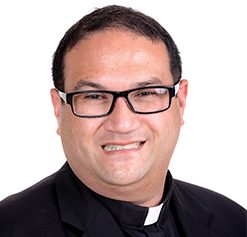 Matthew Yim, SJ, was born in Honolulu, Hawaii, and earned a bachelor’s degree in English literature and East Asian studies, with a concentration in Chinese language and literature, from Oberlin College. Following his college graduation, he lived and worked in China, teaching English as a second language to undergraduates and graduate students at Shanxi Agricultural University. Following his years in China, Matt returned to the United States and, while working, earned a master’s degree in library and information sciences from the University of Hawaii, Manoa. During this time, he felt a call to religious life and entered the Society of Jesus.

As a Jesuit, Matt has worked in hospitals, prisons, primary school and high school libraries, as a lecturer at Gonzaga University, and in various capacities at the parish level. He has also served as a deacon at St. Ignatius Loyola Parish in Sacramento, California, and will receive his Master of Divinity from the Jesuit School of Theology of Santa Clara University. After ordination, he will serve as the parochial vicar at St. Ignatius Loyola Parish in Sacramento.

“My Jesuit vocation has allowed me to better understand that everything is a gift from the Lord and that these gifts are not just for us but are meant to be shared with others for God’s greater glory,” says Matt.