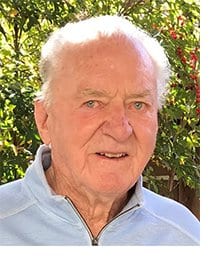 By all accounts, it’s been an extraordinary life and Jesuit vocation for Fr. Bernard Coughlin, SJ. The longest-serving president of Gonzaga University, Fr. Coughlin helped turn Gonzaga around when the school faced financial calamity in the early 1970s. He has received countless honors, served on blue-ribbon commissions, traveled the world, and befriended high-ranking public officials. He gained such prominence in Spokane, where Gonzaga is located, that the business community called on him to serve as chairman of the city’s Chamber of Commerce (a call he accepted, in the late 1980s).

Fr. Barney, as he’s called, has done it all. But in some ways, the work he’s doing today at the age of 96 is just as important. In 2017, after serving as Gonzaga’s chancellor for 20 years and earlier as its president from 1974 to 1996, Fr. Barney moved to the Jesuits West Province’s retirement and healthcare facility, Sacred Heart Jesuit Center, in Los Gatos, California. As the elder statesman of the facility, Fr. Barney’s ministry of support and encouragement is a grace for the community he calls home.

Bette Davis famously said that getting old is not for sissies. Fr. Barney, who uses a walker and has periods of forgetfulness, has a slightly different take. “Aging can be hard, but you can make it hard on yourself.”

Chalk at least half of that up to pure Texas grit. Born in 1922, Bernard Coughlin was one of five children growing up in Galveston, Texas, during the Great Depression. He attended a Christian Brothers high school but knew nothing of the Jesuits until he read a book about various religious orders. He was powerfully drawn to the Society of Jesus.

His father had a good job with the Santa Fe Railroad and Barney, at 20, was working there too. He might have made a fine railroad man, but “God started poking at me to enter religious life.” The timing wasn’t perfect. There was a girl he was smitten with, but in the end, he told himself, “You’re a fool if God is calling you for something, and you don’t accept. God, after all, is God.” 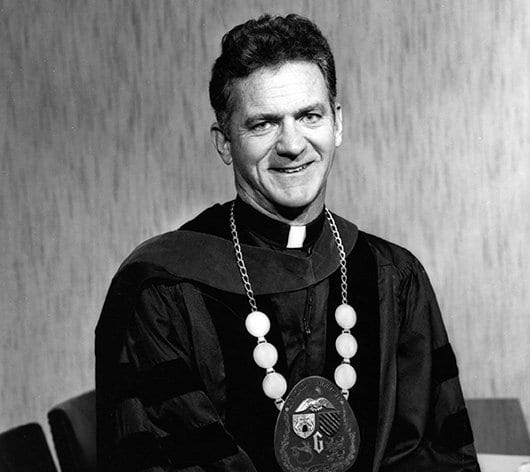 In September of 1942, he said goodbye to his family in Galveston and headed to the Jesuit novitiate in Florissant, Missouri. He later earned both a bachelor’s degree and two graduate degrees (one in philosophy and one in theology) at Saint Louis University. In between, he taught for three years at a now-closed Jesuit boarding school in Wisconsin. He loved teaching but remembers being anxious to move things along. Jesuit formation is a long road, and he wanted to be ordained.

Thirteen long years after he entered the Jesuits, Fr. Barney was ordained in 1955. But it was right back to the books for the young Jesuit as his first mission was to earn a master’s in social work and a doctorate in social welfare. It wasn’t because he was attracted to the discipline or because he had a particular aptitude. The reality was more practical: The Jesuit dean of the School of Social Work at Saint Louis University was nearing retirement, and the Jesuits needed a replacement.

Fr. Barney turned out to be the right man for the job. He was an exceptional dean for a dozen years at Saint Louis University before being tapped for the presidency of Gonzaga University.

Under his watch, Gonzaga achieved financial security, its endowment skyrocketed, enrollment increased and the campus underwent a dramatic transformation. In addition to being a natural dean and administrator, it turns out that Fr. Barney was a very good businessman.

These days, Fr. Barney’s life is quieter, but it suits him. When the weather permits, he likes to walk around the grounds of Sacred Heart Jesuit Center. The campus, which is home to approximately 80 Jesuits, is on a hillside with stunning views of Santa Clara Valley and the Diablo Mountains. The expansive grounds include a beautiful grotto with a statue of the Blessed Mother, fragrant gardens and quiet areas for contemplation and prayer.

Although Sacred Heart Jesuit Center is technically a retirement center, Jesuits never truly retire. Everyone has a mission. Fr. Barney’s mission, like many of the men at the center, is to pray for the Church and the Society of Jesus. He never misses daily Mass and takes his mission very seriously.

A regular at the social hour that precedes dinner every night, he enjoys the company of his Jesuit brothers and is quick to express gratitude for the exceptional staff at Sacred Heart Jesuit Center who care for him and his fellow Jesuits like family.

“I think God is just loving me and asking for my love, and I hope I’m responding by thanking him for everything he’s given me — so far.”

Fr. Barney has been a Jesuit for 76 years. When asked to name his favorite moment, he says it’s impossible because he has loved every step of the journey, including now. “There comes a time when you have to move out of the driver’s seat, where you have to move over to do a job of praying for the next generation of Jesuits or helping other people who moved into your driver’s seat,” he says.

And although losing friends is a painful fact of life at Sacred Heart Jesuit Center, Fr. Barney responds to that reality with well-worn practicality and optimism.

Concelebrants welcome: Please bring an alb; stoles will be provided.