August 17, 2022 — After two years of learning to live, serve and pray as Jesuit novices, Cyrus Habib, SJ, and John Paul Sacedor, SJ, pronounced first vows of poverty, chastity and obedience in the Society of Jesus on August 13 at Sacred Heart Chapel at Loyola Marymount University in Los Angeles.

Reflecting on their two years of novitiate in his homily, Fr. Steve Corder, SJ, who recently concluded nine years as novice director, said, “Our brothers, Cyrus and JP, have grown ever closer to Christ. They have heard the invitation to love, and they want to say yes. They care deeply about the people of God, especially those at the margins, those suffering and the rejected. And they want to help bring the joy and the hope of the Gospel to a world where there is so much need.”

The two newly vowed Jesuits spent the previous two years at the novitiate in Culver City, California, learning about the Society, participating in local ministries and living in community. They also performed community service and completed the 30-day Spiritual Exercises retreat.

For Jesuits West novices, it is a tradition to choose a vow cross of a deceased Jesuit from the province. 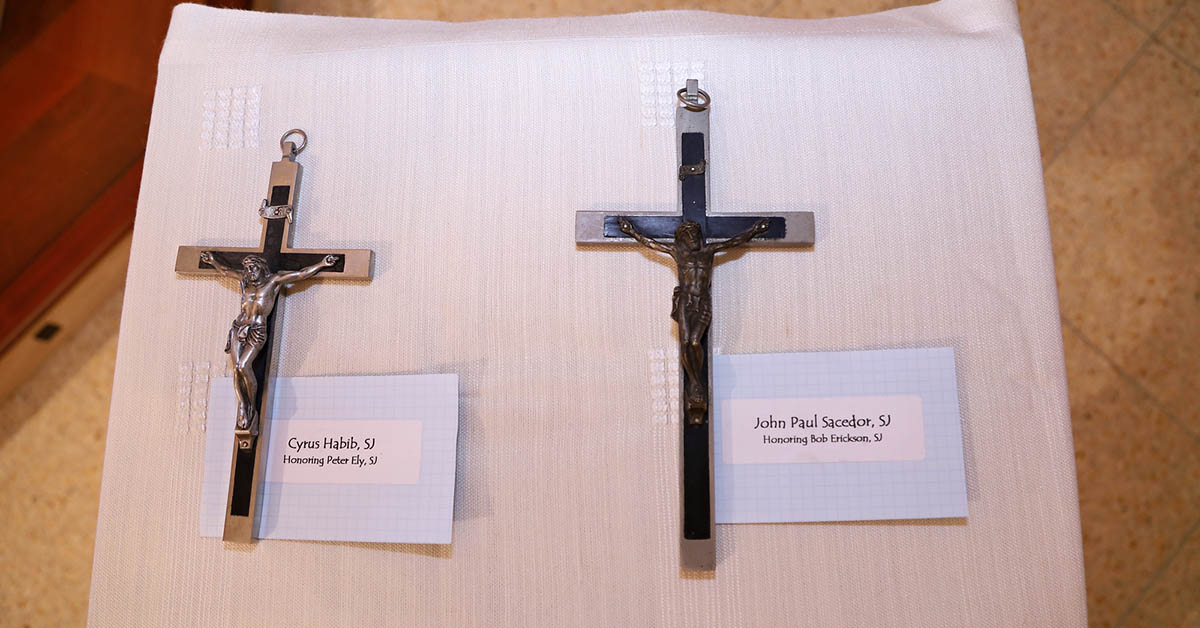 Habib chose the cross that belonged to Fr. Peter Ely, SJ, who was Habib’s first spiritual director when he was discerning his vocation to the Society. They met at Seattle University, where Fr. Ely was teaching at the time. In April 2020, just a few months before Habib entered the Society, Fr. Ely passed away suddenly on Holy Saturday. 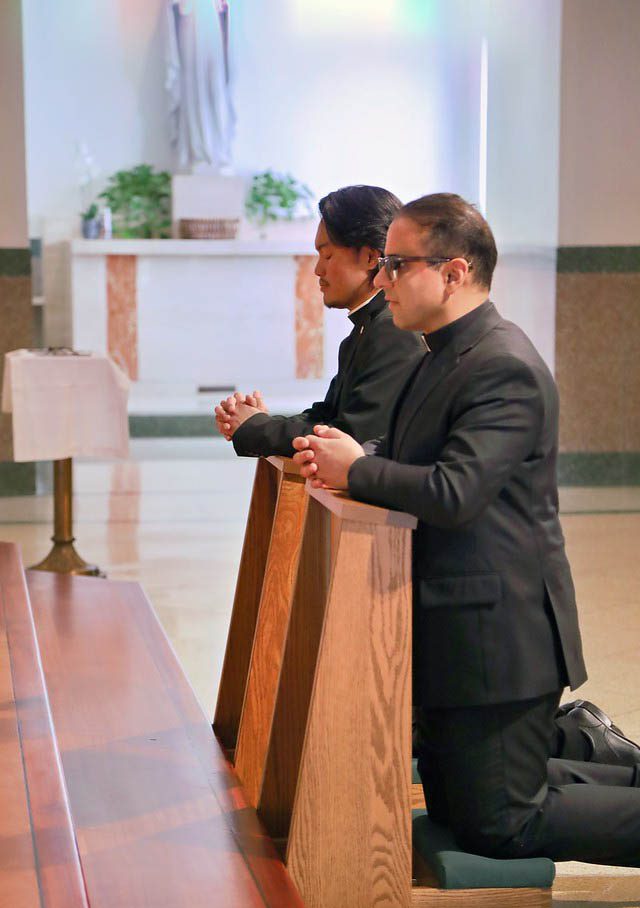 “Peter was a wonderful, prayerful and loving man,” said Habib. “He was so encouraging to me and was the first Jesuit I got to know well. I’m so honored and grateful that I get to carry his cross with me now for the remainder of my life in the Society of Jesus.”

Sacedor chose the cross of Fr. Bob Erickson, SJ, who passed away in December 2021. For one of his novice experiments, Sacedor was sent to Sacred Heart Jesuit Center in Los Gatos, California, which is the retirement and health care center for Jesuits West. “I met Bob, who showed me a great example of how it is to be a Jesuit through his humility, his service for others and his deep love for God. And that’s why I chose his vow crucifix as mine because it’s very important to me, and I’m going to have this crucifix for the rest of my life,” Sacedor explained.

In the conclusion of his homily, Fr. Corder thanked the two Jesuits for saying “yes to God,” and he asked that God continue to give them “his abundant grace always.”

At the end of the Mass, Sacedor and Habib, who is blind, walked down the aisle together arm in arm, the same way they had entered. 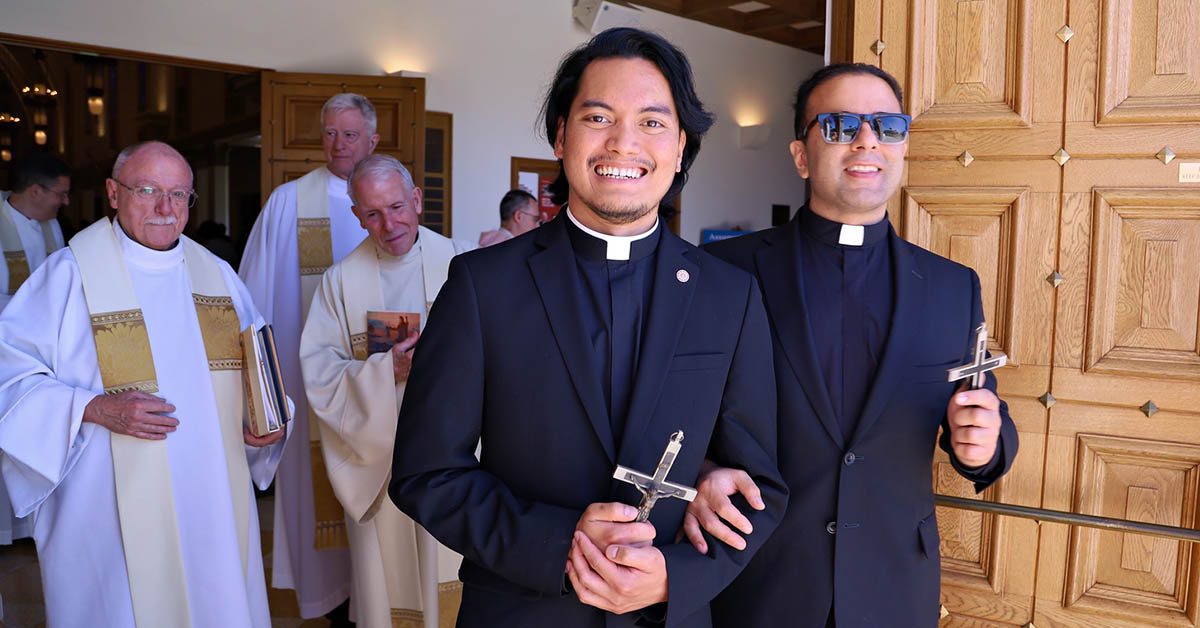 Now that they have pronounced first vows in the Society, Habib and Sacedor will begin the next step of formation, called first studies. Each is being missioned to a Jesuit university for philosophy and theology studies: Habib to Loyola University Chicago and Sacedor to Saint Louis University.

In the First Vows Mass program, they discussed this next step in their Jesuit journey: “Following in the footsteps of St. Ignatius, we will be ‘spending some time in studies in order to help souls.’ Against the backdrop of structural racism, economic inequality and a global pandemic, each of us follows Jesus, carrying his cross as we labor with him for peace and justice in the kingdom of God.”

Watch the recording of the First Vows Mass.

Apostolic Planning Steering Committee Meets in Portland
From August 14-16, the Jesuits West Province’s Apostolic Planning Steering Committee met at the province curia in Portland to begin work shaping what will be the next 12 to 15 months of the broadly consultative and prayerful process the province will engage in.
Story
Fr. Andrew Rodriguez, SJ, Professes Final Vows, Becomes Novice Director on Ignatius Day
Fr. Andrew Rodriguez, SJ, professed final vows in the Society of Jesus and became the director of novices for Jesuits West on July 31, 2022.
Story
Jesuits West Magazine – Spring/Summer 2022
First and Foremost a Jesuit
Publications