April 21, 2022 — Students from Jesuit high schools in California came together in the state’s capital last month to advocate for social issues they’re passionate about. About 75 students from five high schools took part in the second advocacy day co-sponsored by the Ignatian Solidarity Network and CORE (Collaborative Organizing for Racial Equity), a Jesuits West initiative launched in September 2020.

“We wanted to put students at the center of the work, allowing them to lead and pick local issues,” explained Annie Fox, assistant for justice and ecology organizing for Jesuits West. The advocacy day fit in well with CORE’s goals, which are to “think, pray, learn, organize and advocate together for racial equity, believing that we can be more impactful for justice when we work together,” Fox said. 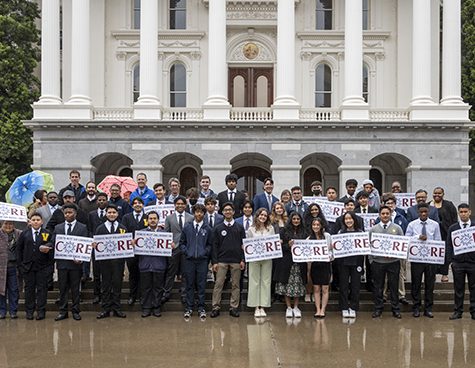 Students began meeting online in February and came up with three issues to focus on, after listening to the concerns of their communities: homelessness and housing equity, youth mental health, and youth criminalization.

“After they identified these concerns, we looked at how we move from a problem to an issue. We know we care about this problem, but how do we find a tangible policy or issue that we could act on to make a change?” Fox said. To do this, students met with advocates from PICO in California, a national network of faith-based community organizations, founded by Father John Baumann, SJ.

PICO staff advised the students to focus on tenant legal aid because several eviction protections and rental assistance programs were about to expire in California. “They also suggested in terms of youth mental health that we focus on a bill that would create more mental and behavioral health systems in public elementary and middle schools,” said Fox.

On March 27, the student advocates gathered at Jesuit High, kicking off the event with a Mass celebrated by Bishop Jaime Soto of Sacramento. During the homily, Bishop Soto told the students that the Eucharist is commissioning all of us toward action and advocacy.

After Mass, students had training and workshops, which included one on conflict resolution, another on breaking biases and creating a more inclusive campus, and an immigration simulation to better understand the refugee experience. Then students spent time preparing for their advocacy meetings.

The next day, students held a public witness at the capitol, calling for action on their three issues of focus. Father John McGarry, SJ, president of Jesuit High in Sacramento, and Father Brad Mills, SJ, associate pastor at Most Holy Trinity Church, both spoke at the public witness as well.

Mia Aaronson, a senior at St. Ignatius College Prep in San Francisco, spoke about her work as a volunteer with the Gubbio Project, which provides homeless guests a safe space to sleep and daily supplies. By volunteering, Aaronson said she was able to hear stories from real people who are experiencing homelessness in the city. “In making personal connections with many of our regular residents, I realized the importance of giving voice to those on the margins and internalizing their struggle.”

“Students were talking about issues that they care about personally,” Fox said. She noted that many of them are impacted by the issues they advocated for, such as the housing crisis or the lack of mental health services.

After the public witness, students held individual meetings with their respective legislators, asking them to take action to support the issues.

“Since General Congregation 36, Jesuits have been on a mission of justice and reconciliation,” Fox said. “And the reality is that justice isn’t something we can achieve alone. We really need to be uniting to exercise a prophetic voice to challenge the social, political and economic systems that generate injustice as Father General Arturo Sosa, SJ, calls us to in his letter on the Universal Apostolic Preferences.

“It was really beautiful to see students doing exactly that—uniting their voices,” she said.

“Students sometimes feel alone in their work for justice,” Fox said. “And I think they feel fed coming together and getting to learn from each other—and being inspired by each other and the Jesuit mission for justice.”