When a man finishes the novitiate, he takes his vows of poverty, chastity, and obedience. Jesuits who are going on to studies that lead to priestly ordination are called scholastics. Some men are brothers, who serve the Church in a variety of ways, with the exception of sacramental ministry. The period of first studies allows the newly-vowed Jesuit a time to integrate his intellectual and spiritual growth.

In the United States, scholastics and brothers usually enroll at Fordham University in New York, Loyola University Chicago, or Saint Louis University. Others might study abroad. Some men may finish work on a bachelor’s degree, while most others work on a master’s degree in philosophy, and all begin their study of theology. While study is their principal apostolate during these years, they also serve the ministry needs of the local church, perhaps assisting in prison chaplaincy or staffing a homeless shelter.

Michael attended Jesuit High School in Carmichael, California and graduated from Loyola Marymount University in Los Angeles with a bachelor’s degree in Theology. Prior to entering the Society, Michael worked as support staff at a residential facility for adults with intellectual and developmental disabilities in Davis, California. He is currently undertaking First Studies at St. Louis University in Missouri. Brett met the Jesuits at Gonzaga Prep in Spokane, Washington and attended the University of Portland earning a BBA in accounting. Hoping there was more to life than financial statements and unqualified audit reports, Brett became a professional volunteer in the Peace Corps and the Jesuit Volunteer Corps where he respectively served in Costa Rica and at Dolores Mission Parish in Boyle Height, Los Angeles. Brett enjoys eating (always), running (sometimes) and sharks (never). Myles attended Jesuit College Preparatory School in Dallas. He graduated from Boston College with a bachelor's in management and completed the sacrament of confirmation on campus at St. Ignatius Church. Myles returned to Jesuit Dallas to serve in the Alumni Service Corps, then pursued a master's in counseling while working in campus ministry at Loyola Marymount University in Los Angeles. He is currently undertaking his studies at Loyola University Chicago. Daniel attended Loyola High School in Goa, India before moving to the United States to attend the University of Minnesota. At U of M he received a master’s degree in Mechanical Engineering. Later he worked as a design engineer for a semi-conductor equipment company in the Silicon Valley. Daniel was actively involved with the Young Adult Ministry at Saint Martin of Tours Parish in the San Jose Diocese. He is currently undertaking First Studies at St. Louis University in Missouri. Travis earned a bachelor's in history/social studies from Western Washington University, and most recently worked as a licensed practical nurse in Buckley, Washington. His first contact with the Jesuits was through the Jesuit Volunteer Corps in Boston back in 2004-2005. When not singing while passing meds to his patients, Travis volunteers in various roles at his parish, practices piano and explores day hikes near Mount Rainier. Chris earned a bachelor's degree in biochemistry at the University of California, San Diego, and a master's degree in information systems at Santa Clara University in California. He worked in information technology at startups in Silicon Valley and was also a sales system engineer. For over 20 years he volunteered as a catechist in the San Jose Vietnamese community and worked with youths and young adults. He is currently undertaking his studies at Loyola University Chicago. Alex earned a bachelor's in biomedical engineering from the University of California, Irvine and a master's in physician assistant (PA) practice from the University of Southern California. He completed additional training at the Norwalk Hospital/Yale University PA Surgical Residency. Afterward, he practiced as a cardiothoracic surgery PA. He was active in the Vietnamese Christian Life Community, serving in the young adult ministry and training leaders for youth retreats. Alex enjoys cooking, hiking, and camping. Collin grew up in Pasco, Washington, where he attended Tri-Cities Prep Catholic high school. He received a bachelor's degree in civil engineering from Gonzaga University in 2015 and worked in Spokane as a civil engineer for two years. His desire to become a Jesuit was sparked by a SEEL retreat through St. Aloysius parish, and he is attracted to the Jesuits' commitment to stand with people on the margins. He has traveled to Zambia and Kenya assisting with community development projects and has played in a rock band for five years. He enjoys traveling, cooking, nature, craft beer, and watching Gonzaga basketball.

Danilo moved to the United States from Nicaragua then went on to graduate with a bachelor’s degree in psychology from the University of California, Berkeley. Prior to entering the Society, he worked as a library supervisor at UC Berkeley and ministered to Hispanic young adults at his parish. Danilo discovered Ignatian spirituality when he attended the Instituto Hispano at the Jesuit School of Theology of Santa Clara University in California. He is currently undertaking First Studies at Loyola University Chicago. Nick graduated with a bachelor's degree from Arizona State University and a master's degree from CSU, Long Beach. He has spent the last 14 years of his life teaching and coaching competitive speech and debate, first as a graduate assistant and then as a program director. A convert to Catholicism, Nick discovered the Jesuits through a Spiritual Exercises program at a local parish. His passions include reading, running, and learning to play the guitar. An Hoang was born and raised in Saigon, Vietnam until his family moved to the United States in 2010. He graduated from the University of California, Irvine with a bachelor’s degree in Philosophy and Educational Sciences. For the five years prior to entering the Society he taught catechism at his local parish. He is currently undertaking First Studies at Fordham University in New York. 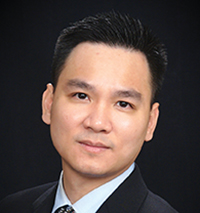 An Nguyen moved with his family to the United States at the age of 9 from Vietnam. He graduated from Portland State University with a bachelor’s degree in Biology. He completed further studies in pre-dentistry and evolution before discerning religious life. He taught Vietnamese in the local parish school and participated in the local diocesan discernment group before applying to the Society of Jesus. He is currently undertaking First Studies at Loyola University Chicago.