A man of great energy and strong convictions, Fr. Rainaldo touched the lives of many people.

Born in Ironwood, Mich., on March 4, 1929, Fr. Rainaldo attended grade school and high school in Hurley, Wis. and Marquette University in Milwaukee. On August 17, 1951, he entered the Society of Jesus at St. Stanislaus Seminary in Florissant, Mo. Father Rainaldo had the usual Jesuit course of studies at St. Stanislaus, Saint Louis University, and St. Mary’s College. He was ordained a priest on June 16, 1964, made tertianship in Decatur, Ill., and professed his final vows on August 15, 1967.

Father Rainaldo had many years of active ministry in a variety of assignments, many of them involving leadership positions. After tertianship, he returned to Creighton Preparatory School in Omaha, where he had done regency, and served there as assistant principal, rector/president, and alumni director until 1973.

After three years on the staff of the Jesuit Retreat House on Lake Winnebago in Oshkosh, Wis., he spent four years serving as spiritual director of the diocesan priests of the Archdiocese of Omaha. Father Rainaldo was rector of the Marquette University High School Jesuit Community from 1981 to 1983; director of the Oshkosh Jesuit Retreat House on Lake Winnebago from 1983 to 1990; and director of the Jesuit Seminary Guild in Milwaukee from 1990 to 1994. He was national director of the Apostleship of Prayer from 1995 to 2003. As Fr. Rainaldo began to experience a number of serious health problems, he continued to do pastoral and retreat ministry in the Milwaukee area, moving to the St. Camillus Jesuit Community in 2006.

A man of great energy and strong convictions, Fr. Rainaldo touched the lives of many people. He struggled with a number of serious health issues in his later years but somehow managed to carry on. At the end, Fr. Rainaldo was ready to entrust himself to the good and gracious Lord he served so well. 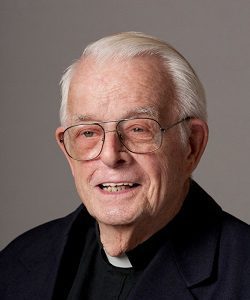