Father Brophy is remembered fondly by many Jesuits who experienced his watchful care and assistance as the Chicago provincial assistant for formation.

Father R. Michael Brophy, SJ, died on June 10, 2013, at Colombiere Center in Clarkston, Mich. Father Brophy was born on May 7, 1938, in Chicago. He graduated from Loyola Academy in Wilmette, Ill. before entering the Society of Jesus on September 1, 1956, at Milford, Ohio. He was ordained a priest on May 29, 1969, in Aurora, Ill., and professed final vows on February 2, 1976. As a Jesuit, Fr. Brophy earned a bachelor’s degree in Latin and a master’s degree in English from Loyola University Chicago.

After juniorate at Milford (1958–60) he moved to West Baden College in southern Indiana (1960–63) for philosophy. Fr. Brophy returned to his alma mater, Loyola Academy, and taught English during his regency (1963–66) and then went to theology at the Bellarmine School of Theology in North Aurora, Ill. (1966–69).

Father Brophy’s ministerial focus turned to formation when he moved to Loyola University Chicago, where he wore many hats, including minister and assistant to the rector (1982–83), director of the Collegian Program (now called the First Studies Program) from 1983 to 1984, and superior of the Lewis-Bremner Community (1983–88). He is remembered fondly by many Jesuits who experienced his watchful care and assistance as the Chicago provincial assistant for formation (1985–90). Father Brophy then moved to Cincinnati where he helped to form adults in their spiritual lives. He was a retreat and spiritual director at the Jesuit Spirituality Center at Milford (1991–99) and worked in adult faith formation at St. Xavier High School (1999–2009). In 2009, he moved to Colombiere Center, where he did as much community service as his health allowed.

Memorial Gifts
Memorial gifts may be made to The Jesuits, 2050 N. Clark Street, Chicago, Illinois 60614.
To make an online contribution, please click here. 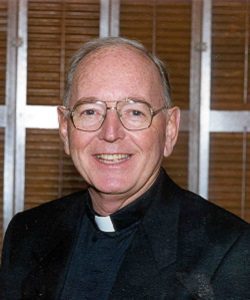