A member of the Greatest Generation, he served in World War II as a paratrooper and participated in the Battle of the Bulge near Arlon, Belgium.

Thomas Garvin Williams was born November 4, 1925, in Ilwaco, Washington, the son of Rees B. Williams and Marguerite E. Williams, née Garvin. After graduating from Ilwaco High School in 1943 and serving in the Army for three years, he attended Gonzaga University for two years. There “Tiger Tom” was a formidable basketball player coming off the bench to the roar of the fans.

In 1948, he entered the Jesuit novitiate at Sheridan, Oregon, and after completing the classical curriculum there, returned to Gonzaga University for philosophy studies. A two-year stint at Marquette High School in Yakima, Washington, followed, where he taught history, moderated student activities and did some coaching. He completed theology studies at Alma College, near Los Gatos, a campus of Santa Clara University from 1957-1961.

From 1970 until he retired from active ministry in 2012, he served as pastor of a variety of parishes, notably St. Ignatius in Portland, Oregon; St. Joseph’s in Seattle; St. Aloysius in Spokane; St. Stanislaus in Lewiston, Idaho; and St. Ignatius in Montana. He also helped in churches in Jamaica and Belize.

Fr. Williams was predeceased by his brothers, Rees and Michael. He is survived by his sister-in-law, Jeannine Williams, of Vancouver, Washington, and extended family members.

Donations in memory of Fr. Williams may be made to the Jesuits West Province of the Society of Jesus, P.O. Box 68, Los Gatos, CA 95031, or to a charity of your choosing. 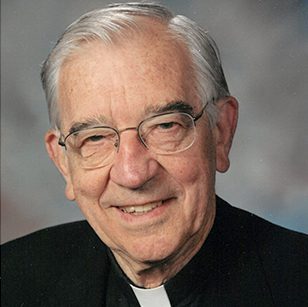