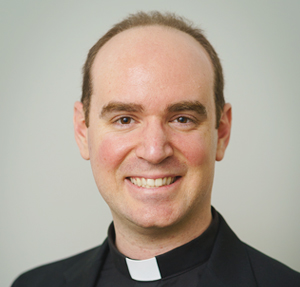 Fr. David Romero, SJ, was born and raised in Northridge, California, where he served on the altar and as a Eucharistic minister for many years in his home parish of Our Lady of Lourdes. After graduating from Crespi Carmelite High School in Encino, California, David headed to Loyola Marymount University in Los Angeles, where he hoped to pursue an acting career. God, however, had other ideas! After meeting the Jesuits at LMU, David quickly became involved with campus ministry and the Center for Service and Action. These opportunities to live a life of faith and justice led him to study abroad with the Casa de la Solidaridad program in El Salvador, which deepened his discernment to enter the Jesuits after he graduated in 2009 with a bachelor’s degree in theological studies. As a novice, he volunteered as a hospital chaplain at St. Francis Hospital in Lynwood, California, and at the Jesuit Restorative Justice Initiative, worked at St. Anne’s Primary School in Kingston, Jamaica, and taught at Verbum Dei High School in Los Angeles. After professing first vows in 2011, he was sent to Fordham University in the Bronx, New York, where he earned a master’s degree in philosophical resources and helped in the campus ministry office of Cristo Rey New York High School in East Harlem. For his Regency, David was sent to work for one year with the alternative study abroad program Casa Bayanihan in the Philippines, accompanying students and marginalized communities in Metro Manila. He was then missioned for two years to Bellarmine College Preparatory in San Jose, California, where he taught religion and helped in campus ministry and with immersions and served as the chaplain for the theatre program. In 2017, he was missioned to the Boston College School of Theology and Ministry, where he earned his Master of Divinity degree while serving as a chaplain at the Suffolk County House of Corrections and then as a deacon at St. Michael Parish in Bedford, Massachusetts. After ordination, he will join the team of Christus Ministries in Los Angeles, which serves young adults.