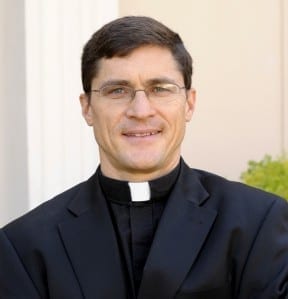 Fr. Scott Santarosa, S.J., has been appointed by Fr. General Adolfo Nicolás, S.J., as the next provincial of the Oregon Province of the Society of Jesus. He will take office in the summer of 2014, succeeding Fr. Patrick Lee, S.J., who has served as the provincial since 2008. As part of the ongoing national realignment of the Jesuit provinces in the United States, Fr. Santarosa will become the provincial of the new province when the existing Oregon and California provinces come together.

Fr. Santarosa is a graduate of Jesuit High School in Sacramento and Santa Clara University. After a year spent with the Jesuit Volunteer Corps, he entered the Society of Jesus in 1989. Ordained in 2000, he made his final vows in 2007.

After ordination, Fr. Santarosa worked for five years at Verbum Dei High School in Los Angeles, teaching religious studies and serving as campus minister. He also served as the vice president for development and communication for two years and as the acting principal for another year. Since 2006, he has ministered at Dolores Mission in Los Angeles as pastor. During his first years there he was also the superior of the Jesuit community attached to the parish. He has also served on a number of boards of Jesuit institutions and been a consultor to both the provincials of the California and Oregon provinces.

“I am very happy that Fr. General has appointed Fr. Santarosa as the next provincial of the Oregon Province,” said Fr. Lee. “He has shown himself to have the qualities necessary to care for the men and the ministries of our province. I have come to know Scott these past years as he served as one of my consultors. I trust his commitment to the Society and the Church. He has been an important part of the process of bringing the California and Oregon province together and the staff of the two provinces look forward to assisting him in his new mission.”

“I feel it is an honor to walk with my Jesuit brothers and lay companions in the Northwest,” said Fr. Santarosa. “It will be a privilege to get an inside view of their great goodness and the fine work they have been and are doing, and to live our common Jesuit vocation together as friends in the Lord.

“The Society of Jesus has been so good to me–I love her deeply. I am grateful, and I feel ready to serve however I can, as imperfectly as it will be. I ask for peoples’ prayers, and I promise my best efforts.”