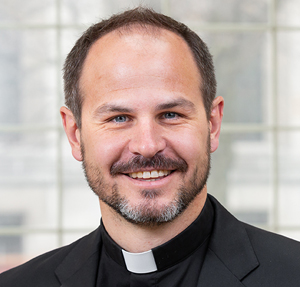 Fr. Gregory Celio, SJ, was born and raised in Fullerton, California, the youngest of three children. He grew up in St. Juliana Falconieri Parish and School and attended Servite High School in Anaheim, California. He studied history at the University of Notre Dame where he discovered a love for liturgical music and campus ministry. After graduating in 2004, Greg participated in Notre Dame’s ACE (Alliance for Catholic Education) service-through-teaching program, bringing him to Nashville, Tennessee, where he taught for two years at St. Vincent de Paul School. He also earned a master’s degree in education before teaching at Overbrook School, also in Nashville. Interested in the Jesuits’ unique spirituality, Greg began discerning a vocation to the Society of Jesus. After entering the Society in 2009, he worked as a novice at Santa Clara University and on the Fort Belknap Reservation in Montana. After three years studying philosophy, theology and music at Saint Louis University, Greg moved to Tacoma, Washington, to teach history at Bellarmine Preparatory School. He also coached baseball and football and led retreats. Greg spent his third year of Regency in Guadalajara, Mexico, learning Spanish and volunteering at Ciudad de Los Niños, a Jesuit work dedicated to lower-income children in Guadalajara. For the last three years, Greg has studied theology at Regis College at the University of Toronto and served as a deacon at Parroquia San Juan Bautista. He received his Master of Divinity degree from the University of Toronto in May. Following ordination, Greg will serve at Seattle Preparatory School and will also support the Province’s vocation promotion efforts.