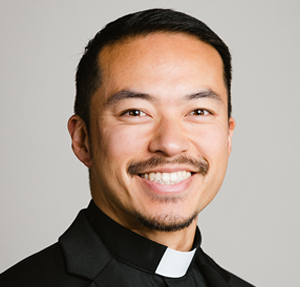 Fr. Justin Claravall, SJ, was born in Los Angeles County to parents who emigrated from the Philippines. After attending Catholic school in Artesia, California, Justin went to a public high school, where he recalls having “a lukewarm faith” and being “disconnected and suspicious of the American dream without knowing of an alternative.” By the time he finished college at the University of California, Santa Barbara, with a bachelor’s degree in the history of art and architecture, Justin had met the Jesuits, which proved to be a fateful turn. After some time tutoring in Cerritos, California and volunteering with Gawad Kalinga in the Philippines and the Newman Center at the University of Hawaii at Manoa, Justin says that God placed him in the Society of Jesus to heal from his wounds and to witness and help others heal from theirs. After earning a master’s degree in philosophy from Saint Louis University, Justin taught religion and community service at Bellarmine Preparatory School in Tacoma, Washington, for three years. Other highlights of his Jesuit formation include working with the Philippine Jesuit Prison Service in Muntinlupa City, Philippines, and working with L’Arche Noah Sealth in Seattle. He earned a Master of Divinity degree from the Jesuit School of Theology of Santa Clara University in Berkeley, California. On the occasion of his ordination, Justin says, “I have been formed by many people all around the world, too many to list, but I carry them all in my heart and hope to return to them what they’ve given to me.” Following ordination, he will serve at Dolores Mission Parish in Los Angeles.