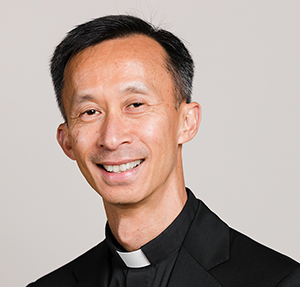 Fr. San Mai, SJ, was born in Saigon, Vietnam. As a young child, he immigrated with his family to Portland, Oregon. San attended Santa Clara University in Santa Clara, California, where he first met the Jesuits. He graduated with a bachelor’s degree in computer engineering in 1989 and a master’s degree in business administration in 1994. Although he was noticeably impressed with the joy and zeal he saw in the Jesuits at Santa Clara University, San did not feel called to religious life but rather to pursue the Silicon Valley dream. Prior to entering the Society of Jesus, San worked for two decades in the Bay Area as a product management and marketing executive for various public and private technology companies. Calling his vocation “late and surprising, yet incredibly consoling” given his career in the corporate world, San entered the Society of Jesus in 2011. As a novice, he worked as a teaching assistant at Jesuit High School in Portland, Oregon. San then studied philosophy at Loyola University Chicago in 2013. Missioned next to St. Andrew Nativity School in Portland, Oregon, he worked for two years as a math and science teacher. San earned a Master of Divinity degree at the Jesuit School of Theology of Santa Clara University in Berkeley, California, while serving as a deacon and leader of children’s faith formation at Our Lady of Lourdes Church in Oakland, California. After ordination, he will serve as the associate pastor at St. Aloysius Parish in Spokane, Washington.