Seven Jesuits from the California and Oregon provinces of the Society of Jesus professed First Vows of poverty, chastity, and obedience on August 13 in a Mass at the Sacred Heart Chapel on the Loyola Marymount University campus. 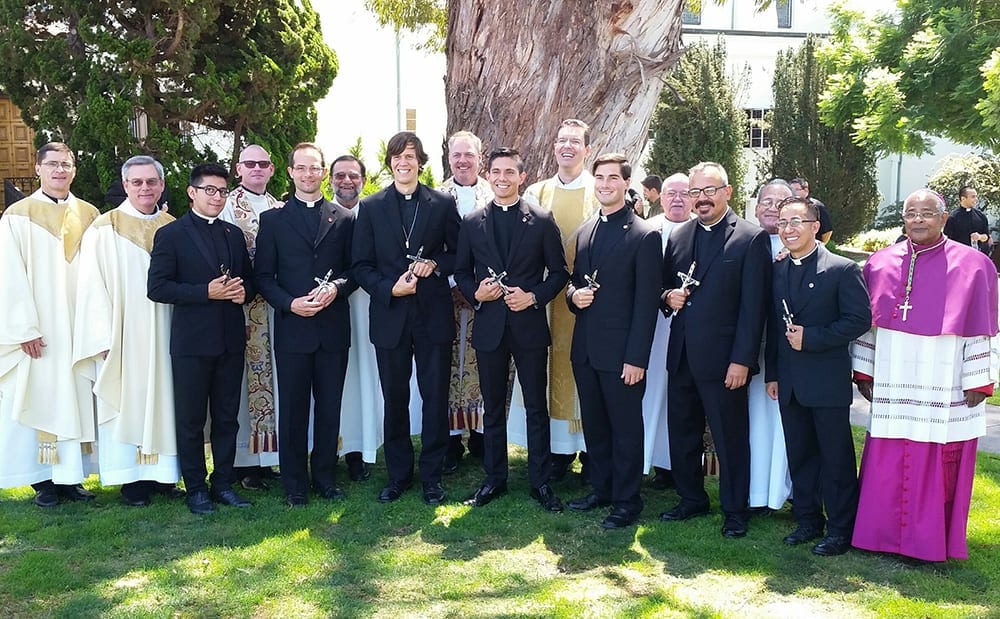 First Vows marks the end of the men’s two-year period as novices at The Jesuit Novitiate of the Three Companions in Culver City, Calif., as part of their 10- to 12-year Formation journey to Jesuit priesthood or brotherhood. Celebrating the Mass was Father Steve Corder, SJ, director of novices for the California and Oregon provinces. Co-celebrants were California Provincial Fr. Michael Weiler, SJ, and Oregon Provincial Fr. Scott Santarosa, SJ.

With their time at the novitiate complete, the seven men now enter the next stage of Jesuit formation – First Studies – where they will pursue advanced degrees in philosophy and theology.

Berger, 32, holds an associate’s degree from Yakima Valley Community College. From 2009 to 2011, he was a seminarian for the Diocese of Yakima, graduating with a bachelor’s in philosophy from Mount Angel Seminary. Spending two years in a traveling retreat youth ministry gave him the opportunity to travel across the Northwestern and Mideastern United States, as well as through northern British Columbia, Canada. He also attended World Youth Day in Canada in 2002 and in Germany in 2005. Berger will undertake First Studies at St. Louis University.

Chavira Jr., 52, holds a bachelor’s in philosophy from the University of California, Berkeley. He served in the U.S. Marines as an infantryman and worked as an oil refinery operator in Southern California for almost 20 years. His immersion trip to the Kino Border Initiative in Nogales, Arizona and Nogales, Mexico, in which he was “graced to be a Christian witness of hope to the poor and marginalized,” solidified his desire to join the Jesuits. Chavira Jr., will undertake First Studies at the University of Toronto.

Covarrubias, 28, received a bachelor’s in international development studies from the University of California, Los Angeles and a master’s in public diplomacy from the University of Southern California. He has volunteered at Tierra Blanca Arts Center, a nonprofit dedicated to bringing dance and music to underserved communities. He described his participation in the Jesuit-sponsored eight-day national discernment retreat as a “very deep, very real, and very personal encounter with the Risen Christ.” Covarrubias will undertake First Studies at St. Louis University.

Flores Estrella, 32, has a bachelor’s in fine arts in studio art and communication arts from Otis College of Art and Design in Los Angeles. As a professional multidisciplinary artist and designer, he has worked for nonprofit arts organizations or art institutions as artist-in-residence, graphic designer, administrator, project coordinator, and curator. For the past 10 years he has worked as an arts educator with a broad spectrum of diverse communities, creating projects with his students that utilize the arts as a conduit for social and restorative justice. For 16 years he has volunteered with SEARCH Youth Ministries, coordinating weekend retreats and workshops for young adults in disenfranchised communities throughout Los Angeles. Flores Estrella will undertake First Studies at Fordham University.

Hayden, 27, entered St. John Vianney Theological Seminary in the Archdiocese of Denver immediately after graduating from high school in 2006. He spent a short time in the Air Force and completed multiple mission trips, including two to Mexico, which were transformative experiences for him. He volunteered at his home parish for four years before becoming a youth minister. He enjoys traveling, cooking, reading, art, and music. Hayden will undertake First Studies at St. Louis University.

Ornelas, 27, has a bachelor’s in Chicana/o studies from the University of California, Santa Barbara, where he was active in Intervarsity Christian Leadership, St. Mark’s Newman Center, and as a liaison for student government to labor unions and campus workers. From 2011 to 2013, he was a Jesuit volunteer in Belize working in campus ministry at St. John’s College and at a detention center for youth. He biked from San Francisco to Los Angeles for the AIDS/LifeCycle fundraiser in June 2014. Ornelas will undertake First Studies at the Western Institute of Technology and Higher Education (ITESO), Guadalajara, Mexico.

Vu, 40, received his bachelor’s in philosophy from the University of the Incarnate Word in San Antonio. In 2011, he received a doctor of pharmacy degree from the University of Nebraska Medical Center in Omaha. A registered pharmacist, Vu has worked as an ambulatory care clinical pharmacist with the U.S. Air Force and Veterans Affairs in Las Vegas and Reno, Nevada. He was active in youth ministry at the Shrine of Our Lady of La Vang in Las Vegas. Vu will undertake First Studies at Loyola University Chicago.

(Jesuits in Formation rely on the generosity of benefactors, whose gifts help defray the approximate cost of $570,000 per man for the 10- to 12-year Formation program to become Jesuit priests or brothers. Please visit jesuitswest.org/donations to make a gift.)