Faith on the Border: Jesuits and Partners Come to the Aid of Deported Migrants

March 28, 2017 — Last month, a 35-year-old mother of two in Arizona became one of the first unauthorized migrants deported to Mexico under the Trump administration’s immigration crackdown. Her case threw fuel on the debate over administration policy, but for some who minister along the border, the argument was not just political. “It was personal,” said Father Sean Carroll, SJ. 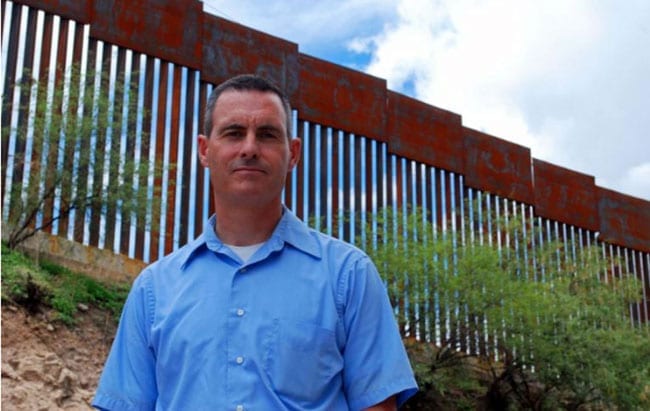 Fr. Carroll at the U.S.-Mexico border.

Fr. Carroll is a Jesuit priest and executive director of the Kino Border Initiative, an immigrant aid organization co-sponsored by six U.S. and Mexican church groups including the Jesuits. At Kino’s facilities in Nogales, Mexico, the deported mother, Guadalupe Garcia de Rayos, found refuge and friendship. She was served warm meals in the comedor, or dining room. She was sheltered in one of the nearby apartments rented by Kino for deportees. And, at a packed evening press conference held in the comedor, she had a platform to raise her voice. 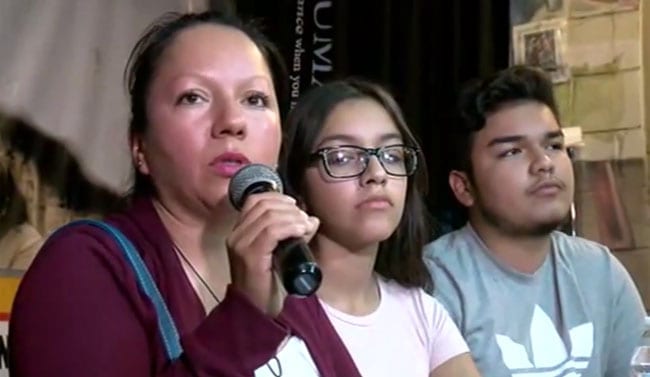 After being deported from the U.S. to Mexico, Guadalupe Garcia de Rayos gave a press conference at the Kino Border Initiative’s comedor, with her two children by her side.

“The truth is I was there [in the U.S.] for my children. For a better future. To work for them. And I don’t regret it, because I did it for love,” she said, referring to her teenage son and daughter who are American citizens. Garcia de Rayos was targeted because she was once arrested in an immigration raid at a waterpark where she worked and convicted for using a fake Social Security number to get the job. She avoided deportation nonetheless, under Obama administration guidelines.

The Kino Border Initiative has been working with immigrants like Garcia de Rayos since its founding in 2009, serving and advocating for them and otherwise providing “a humanizing presence on the border,” as Fr. Carroll described it. That mission has become more challenging in the wake of President Trump’s recent executive orders related to immigration. 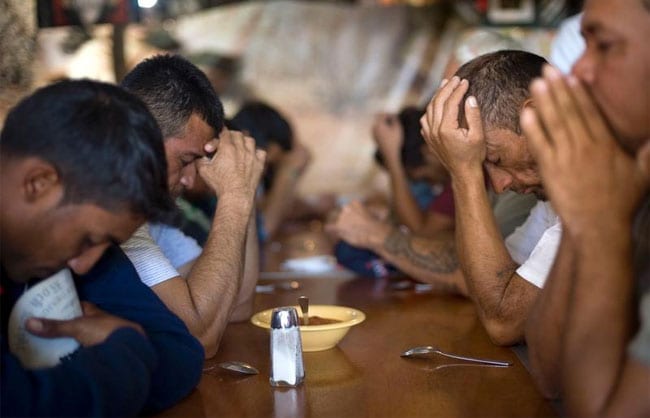 “We’re there to remind them that they have a dignity that’s God-given. They matter to us and they matter to God,” said the priest, a Stanford University graduate and member of the California Province of the Society of Jesus.

Kino is a binational collaboration: founding partners include the California Province of the Society of Jesus, the Jesuit Refugee Service/USA, and the Diocese of Tucson, along with the Mexican Province of the Society of Jesus, the Mexican-based Missionary Sisters of the Eucharist, and the Diocese of Nogales in the Mexican state of Sonora. With 17 staff members and droves of volunteers, the organization last year served around 47,000 meals and provided other hands-on assistance to approximately 8,500 migrants. Most recipients have been deported after either living in the U.S. or trying to enter the country without papers.

The pastoral message of God-given dignity comes across in both tangible and less tangible ways. 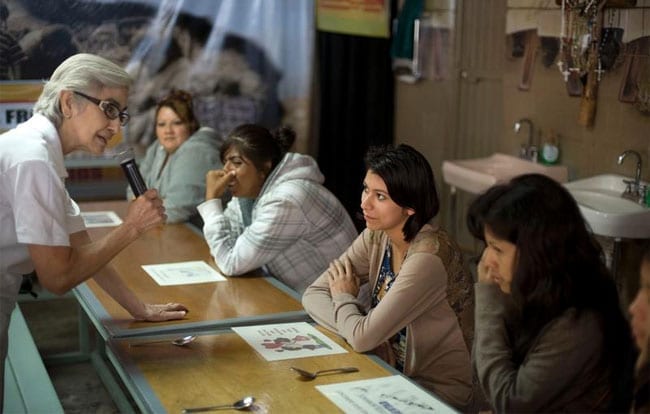 Sister Maria Engracia Robles, a member of the Missionaries of the Eucharist who works at KBI, talks about human rights with undocumented immigrants. (CNS photo/David Maung)

“We look them in the eye. We listen to them. We pray with them. When they leave, they’re standing a little stronger. They’re a little more confident, a little more hopeful,” Fr. Carroll said, referring to migrants in a range of situations including those seeking help accessing the asylum process. “We can’t resolve every situation, but we could remind them that they’re God’s sons and daughters.”

Humanizing the border has never been easy. It was hardly so in the late 1600s when the organization’s namesake, Eusebio Francisco Kino — an Italian Jesuit explorer and astronomer — came to that region as a missionary and wound up defending the rights of persecuted indigenous people. In recent times, the task was far from simple even in the somewhat friendly political climate of the Obama administration. During those years a record 2.5 million people were deported. 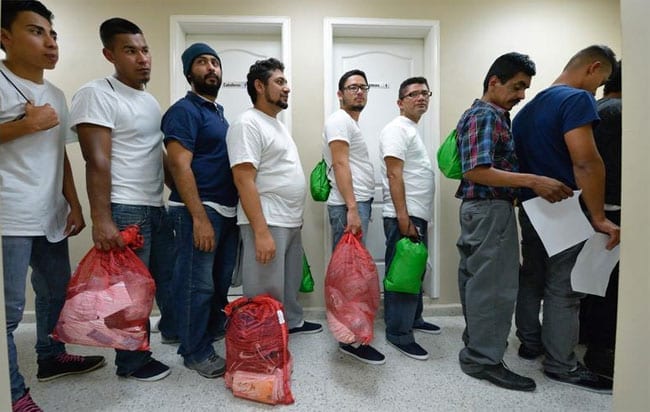 Hondurans arrive home after deportation from the United States in 2015. (CNS photo/Paul Jeffrey)

In 2015, the organization drew media interest with a report titled “Our Values on the Line: Migrant Abuse and Family Separation at the Border,” which found that more than a third of detained migrants experienced some type of abuse or mistreatment at the hands of U.S. border agents. These included theft, physical and verbal abuse, and inhumane detention conditions, according to the study.

During the past two years, Kino has filed dozens of complaints on behalf of Mexican and Central American asylum seekers who say they were deported or turned away without being offered access to hearings or the asylum process — an apparent violation of U.S. and international law. Those migrants are among an increasing number who have fled gang warfare and other violence in Central America. 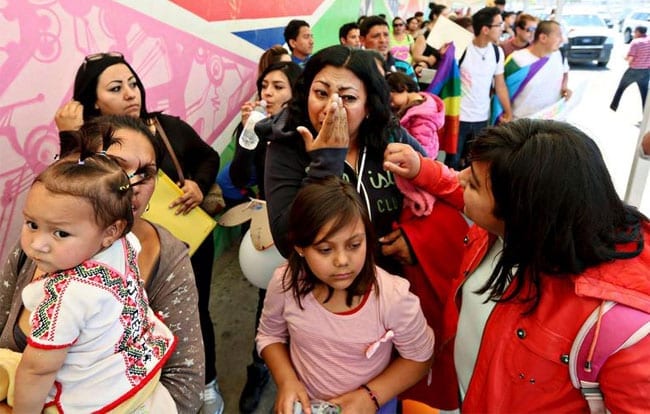 While the Obama administration focused its enforcement on the most serious offenders, his successor is by all accounts casting a wider net.

Referring to vulnerable migrants, a recent statement by Kino said the Trump executive orders “will only make their situation worse” in part by dramatically boosting the number of border patrol agents and giving the agents far wider latitude in deciding who gets deported. The statement was referring especially to asylum seekers who have fled violence in Central America — “much like the Holy Family had to flee Egypt shortly after Jesus’ birth in order to protect Our Lord.” 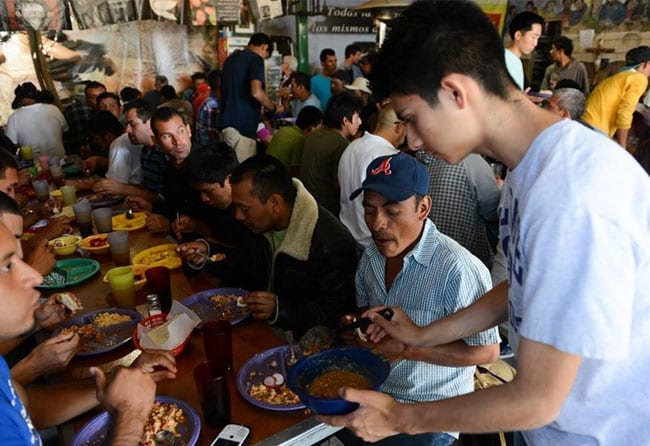 Bellarmine College Preparatory students, visiting from San Jose, California, for an immersion trip, serve the migrants who have gathered for a meal. (Ryan Demo)

With these new challenges, Kino is widening its own net — expanding its services to include, for example, legal aid for those trying to navigate the asylum process. There’s also an effort afoot to purchase property in Nogales that would allow Kino to shelter more migrants when they’re deported, among other services. In addition, the organization is seeking to get more parishes, schools, and other institutions involved in migration issues. 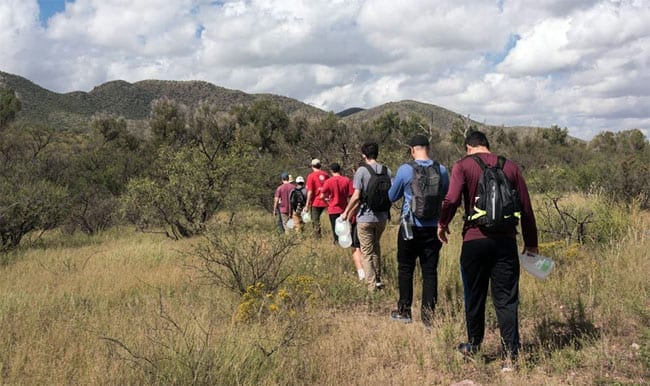 A student group visitng KBI takes an abbreviated but eye-opening walk on a migrant trail, to get a sense of what migrants endure for days or weeks.

Kino already has a lively network of friends and activists far beyond the border. Last year, for instance, 66 groups traveled to Nogales for immersion tours that typically last for days and bring the visitors into the comedor to serve and converse with migrants. Often the itinerary also includes walks into the desert where migrants journey on foot; visits to a Tucson courthouse where migrants are prosecuted; and worship with a community of ranchers in rural southern Arizona. Most of the groups are from Jesuit schools (including high schools, colleges, and universities) as well as from parishes around the country.

One activist who first encountered Kino that way is Joanna Williams. As a student at Georgetown University’s School of Foreign Service, Williams signed up for the university’s annual immersion experience in the border region, which included a day spent at Kino. That was in the spring of 2011. She was so moved by the conversations with migrants and others that she took off the following semester to volunteer full-time at Kino. 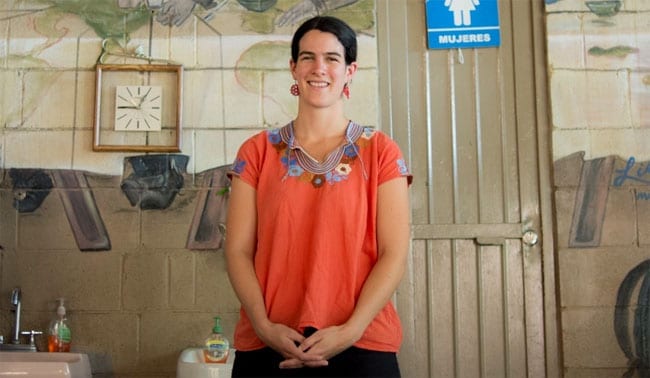 Joanna Williams, director of education and advocacy at Kino

“The experience was overwhelming, but hard to leave,” explained Williams, who graduated in 2013. Today she is director of education and advocacy at Kino, a job that involves coordinating immersion tours of the kind that introduced her to the organization’s work, and then working with the groups post-immersion to nurture their further involvement in migrant ministry.

One growing initiative is Kino Teens, a collection of clubs based primarily in Catholic high schools. One of the clubs — at Lourdes Catholic School in Nogales, Arizona — attracted international attention two years ago after the high school students wrote letters to Pope Francis describing the plight of undocumented immigrants who are deported to Nogales’s sister city in Mexico. Unexpectedly, the pope wrote back. He told the young people they were presenting to “the world a church, without borders, as the mother of all … a church that extends to the world a culture of solidarity.” 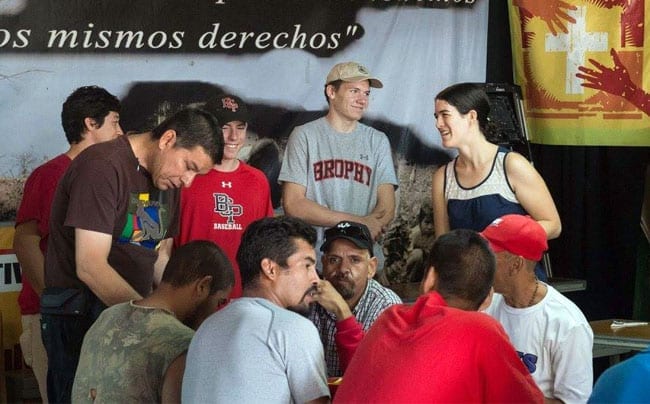 Joanna Williams talks with Brophy College Preparatory students who participated in a Kino weekend immersion at the border.

After beginning at Lourdes, Kino Teens has spread with 10 chapters to schools in California, Illinois, Delaware, and the District of Columbia as well as Arizona. Williams says other chapters are quickly forming.

Teens and others in the Kino network see lobbying on behalf of migrants as part of this ministry — an agenda coordinated with many partnering groups including the Washington-based Jesuit Conference of Canada and the United States. They press office holders at various levels for “policies more humane and reflective of the values of Catholic social teaching,” said Kristen Lionetti, policy director at the Jesuit Conference. “We seek a more generous culture of solidarity.” 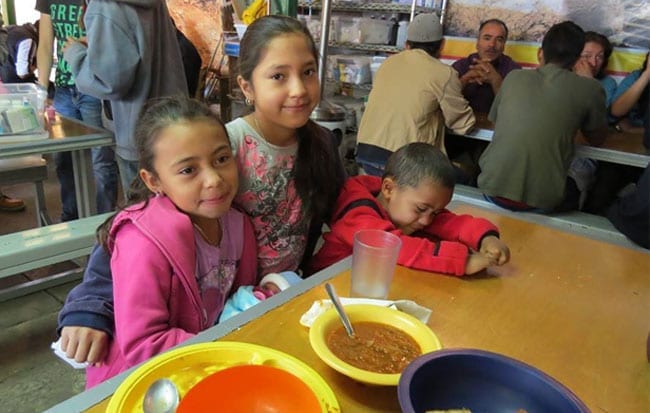 Children at the KBI comedor.

Asked about the many who argue that undocumented immigrants have broken the law and should be punished, Fr. Carroll responded by turning the argument on its head. “The law is breaking them,” he said, referring to family separation, deportation back to life-threatening situations, and other dire results of harsh immigration-law enforcement. “The assumption is that if it’s the law, it must be just. But it isn’t.”

Much help is given, but those ministering on the border say the migrants give and teach them even more. 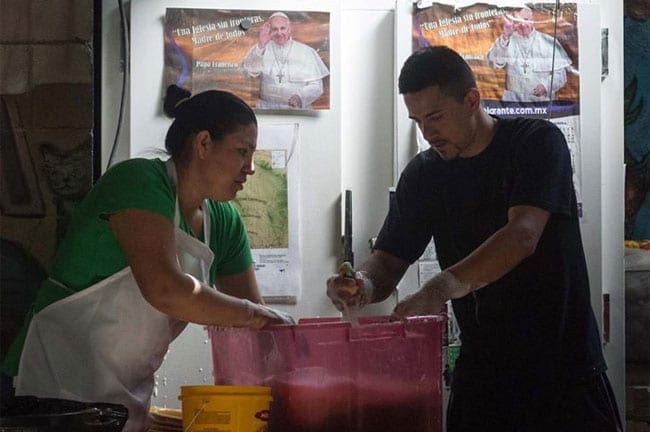 KBI staff member Mariana Serrano Reyes and a visiting student take on the dishwashing duties at the comedor.

“They have taught me a lot about resilience, love and sacrifice, trusting in God,” said Hung Nguyen, SJ, a member of the Chicago-Detroit Jesuit province who worked at Kino from August 2015 until this past June. Like many other Jesuits in formation, he chose border ministry as one (quite literal) way of carrying out the Jesuit mission to stand with people on the peripheryand borders of society. He is now studying theology in Bogota, Colombia. 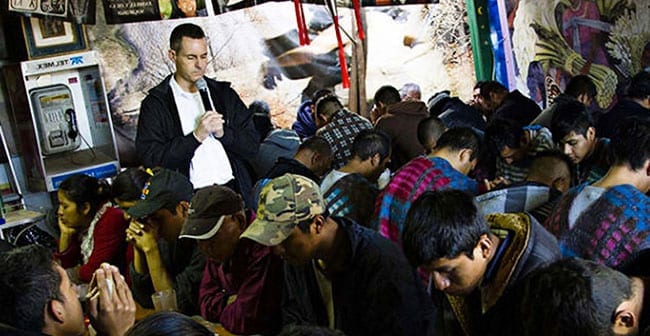 Fr. Carroll offers a blessing before a meal at the comedor.

I never really left the border,” said Thomas Flowers, SJ, another Jesuit in training who served with Kino and is now studying theology in Rome. “I carry the suffering and the hope and the amazing goodness of those people with me in all that I do.”

William Bole is a journalist in Boston and a frequent contributor to the Jesuit Conference homepage.
Additional photos courtesy of Larry Hanelin.

The Ignatian Volunteer Corps (IVC) provides mature men and women the opportunity to serve the needs of people who are poor, to work for a more just society, and to grow deeper in Christian faith by reflecting and praying in the Ignatian tradition