January 8, 2021 — Fr. General Arturo Sosa, SJ, leader of the Society of Jesus, has named Fr. Sean Carroll, SJ, to serve as the next provincial of the Jesuits West Province. The long-serving executive director of the Kino Border Initiative (KBI), a binational humanitarian aid ministry serving migrants on both sides of the U.S.- Mexico border, Fr. Carroll assumes his new role on July 31, 2021, the feast of St. Ignatius of Loyola, founder of the Jesuits.

Fr. Carroll succeeds Fr. Scott Santarosa, SJ, who was named provincial of the Oregon Province Jesuits in 2014 and became provincial of Jesuits West when the Oregon and California Provinces joined together in 2017.

“Humble and zealous, Father Carroll is rooted in Christ. He is a visionary with audacious apostolic imagination who can also put ideas into practice, building partnerships and institutional networks for the sake of the greater good. Experience in Nogales, at one of the frontiers of the Jesuits West Province, has taught him how to work across the many borders that can divide civil society and sometimes even the Society of Jesus. Sean Carroll listens well to Jesuits, to the women and men with whom and for whom we work, and above all to the Spirit. Ignatius might call him a person of discreta caritas, a person of discerning love. Attentive to the circumstances of persons, places, and times, Sean Carroll is well equipped to guide the discernment of our next steps in service to the Lord’s mission.”

Fr. Santarosa said, “Sean and I have known each other for many years going back to our novitiate days. Even as a young man, it was clear that Sean possessed great spiritual depth and was someone who was committed to the Jesuit ideal of standing with the excluded. In the years since and, especially as evidenced during his long tenure at the Kino Border Initiative, Sean has become a respected leader, administrator, bridge builder and collaborator, known by all for his kind heart. Just as he has discerned a path forward for KBI’s critical work supporting migrants at the U.S.-Mexico border, I know discernment will continue to play an important role for Sean in his new mission as provincial of Jesuits West.” 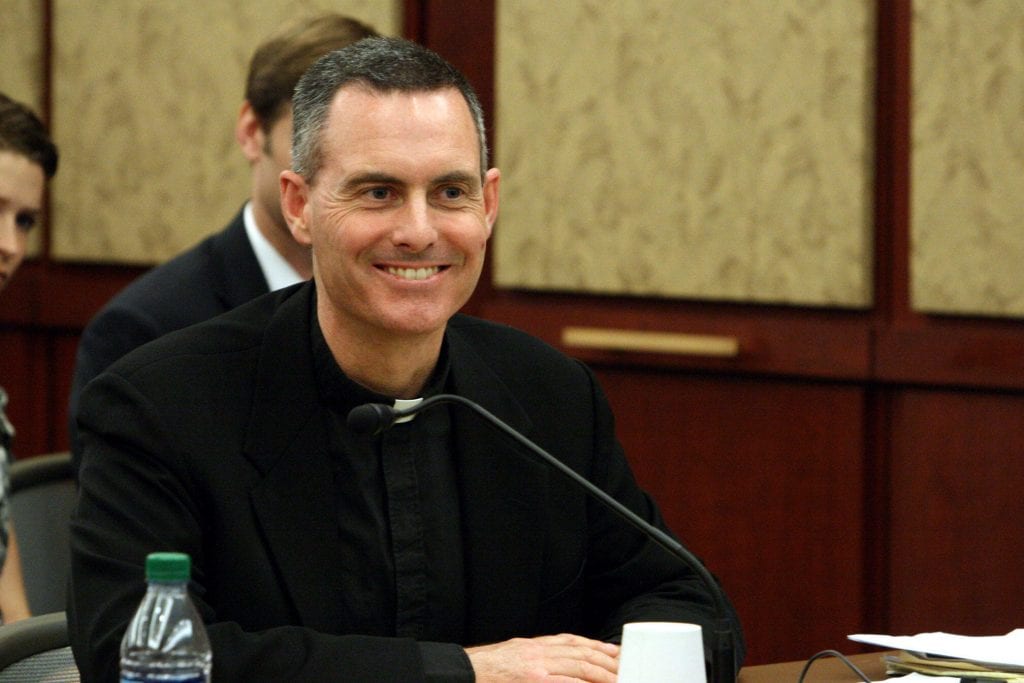 Fr. Carroll testifying at a congressional hearing on immigration in 2013 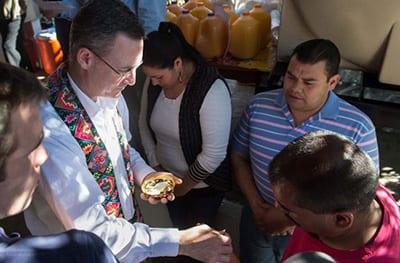 Fr. Sean Carroll, SJ, was born in South Weymouth, Massachusetts, on June 24, 1966, but spent most of his childhood in Southern California. After graduating from Servite High School, a Catholic college preparatory school in Anaheim, California, he earned a history degree from Stanford University in 1988. The next year, he entered the Jesuit novitiate in Montecito, California, professing first vows in August of 1991. Missioned next to Fordham University in the Bronx, New York, he earned a master’s degree in philosophical resources. As a Jesuit regent, he taught social studies at Loyola High School of Los Angeles and served as a pastoral minister at Colegio del Sagrado Corazon in Montevideo, Uruguay. His Jesuit Formation continued at the Jesuit School of Theology (now part of Santa Clara University) in Berkeley, California, where he earned a Master of Divinity degree. Following his 2000 ordination at Blessed Sacrament Parish in Hollywood, California, Fr. Carroll served as the associate pastor of Saint Patrick Parish in Oakland, California, from 2000 – 2004. He then served as the associate pastor of Dolores Mission Parish in East Los Angeles (2004 – 2008) while simultaneously serving as the Province’s Provincial Assistant for Pastoral Ministries for two years. Fr. Carroll completed the final stage of Jesuit Formation, tertianship, in Sao Leopoldo, Brazil, in 2008 before professing final vows in the Society of Jesus in 2010. 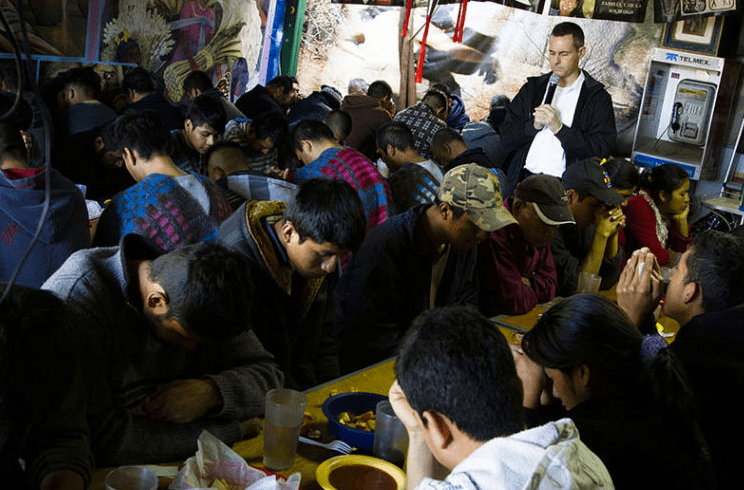 In 2009, after assisting with the feasibility study exploring a Province binational ministry serving migrants, Fr. Carroll was missioned to become the executive director of the Kino Border Initiative. Named in honor of Eusebio Kino, SJ, a 17th-century Jesuit missionary who ministered in Sonora, the KBI was founded by the then-California Province Jesuits and five other religious groups on both sides of the border. 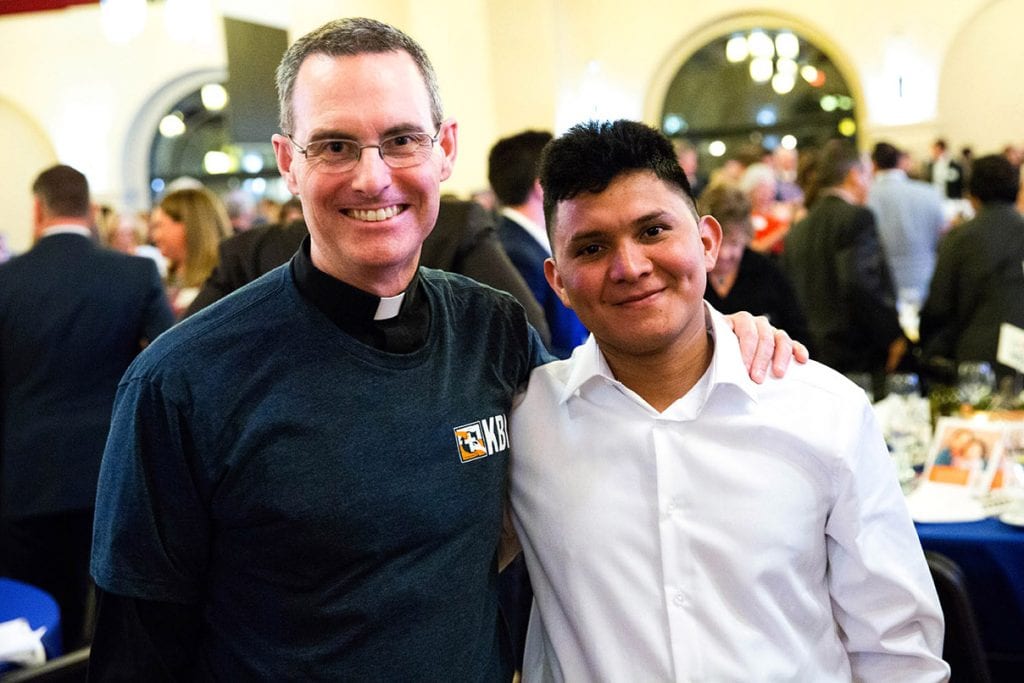 Fr. Carroll with Freddie Sevilla, who KBI assisted in his process of seeking asylum in the U.S.

During his tenure, the KBI has grown from a modest comedor (dining room) serving a small number of migrants per day to an organization that last year provided more than 100,000 meals to men, women and children who were recently deported and others seeking asylum in the U.S. Most recently, Fr. Carroll led a $2.8 million campaign to purchase and remodel a building in Nogales, Sonora, Mexico, to serve as the KBI’s new migrant outreach center. The 18,000-square-foot building, which was inaugurated in February of last year, provides overnight shelter for more than 100 people and services including first aid, legal support and pastoral accompaniment.

Fr. Carroll, who earned a Global Executive MBA in 2017 from Georgetown University, serves on the Board of Trustees of the University of San Francisco and Brophy College Preparatory in Phoenix.

“I am humbled and grateful that Fr. General has missioned me to this new role as provincial of Jesuits West,” said Fr. Carroll. “The Jesuits and lay partners who work in our Province’s many ministries are some of the finest people I know, and I look forward to partnering with them as we follow Christ in a mission of reconciliation and justice. I thank Fr. Scott Santarosa for the tremendous work he has done to bring such great energy and life to our new Province, and I am excited to continue his good work.”

Jesuits West Magazine – Fall 2020
Jesuits West Embraces Gift of Diversity
Publications
Join Jesuits West for Mass this Advent
Let us spend Advent together as the Jesuits West family. Details about our liturgies follow. Please join us this Advent season as we wait in joyful hope together.
News
Five Jesuits West Novices Pronounce First Vows
August 11, 2020 — “This year has been unlike any other in recent memory or that we could have imagined.
News
Scroll to Top
X
Tweet
Share
Share