As a Vietnamese-American Jesuit who teaches at Seattle University, Fr. Trung Pham, SJ, uses his art to express the emotions of never fully belonging.

By Michele Frankeni
This article first appeared in Madonna magazine

January 24, 2020 — When Fr. Trung Pham, SJ, was at Santa Clara University working on his Licentiate in Sacred Theology, his thesis was titled “Extreme Beauty.” 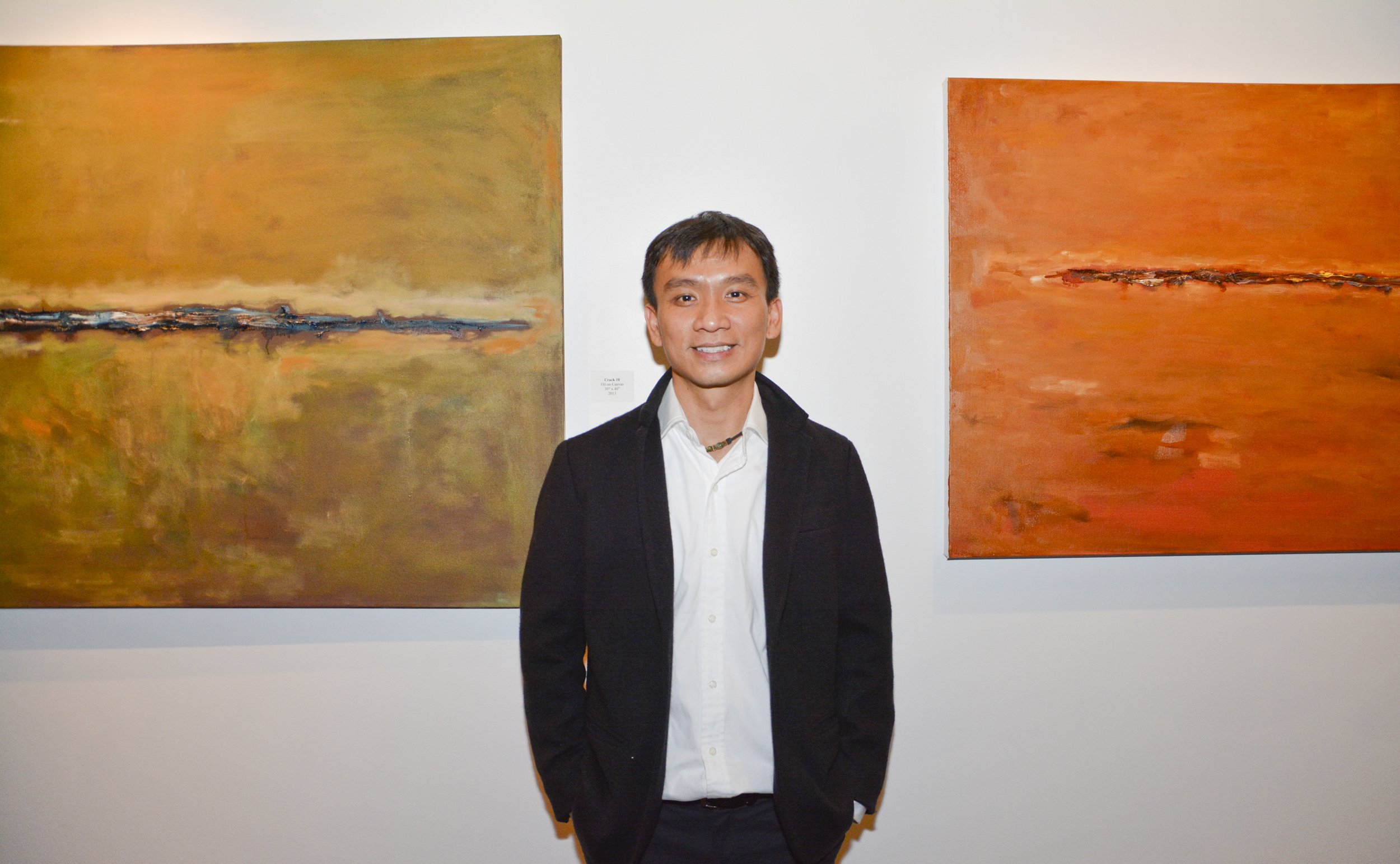 Fr. Trung Pham, SJ, is a professor of fine arts at Seattle University.

“Essentially, it was the beauty of the cross. The main idea was to see the beauty in suffering, salvation, redemption and love,” Fr. Pham said.

“I don’t do flat painting. My works have a sculptural quality and are highly textural.”

Many of his series of paintings — Crack, Wound, Rupture — reflect this beauty in visceral, broken and painful wounds. 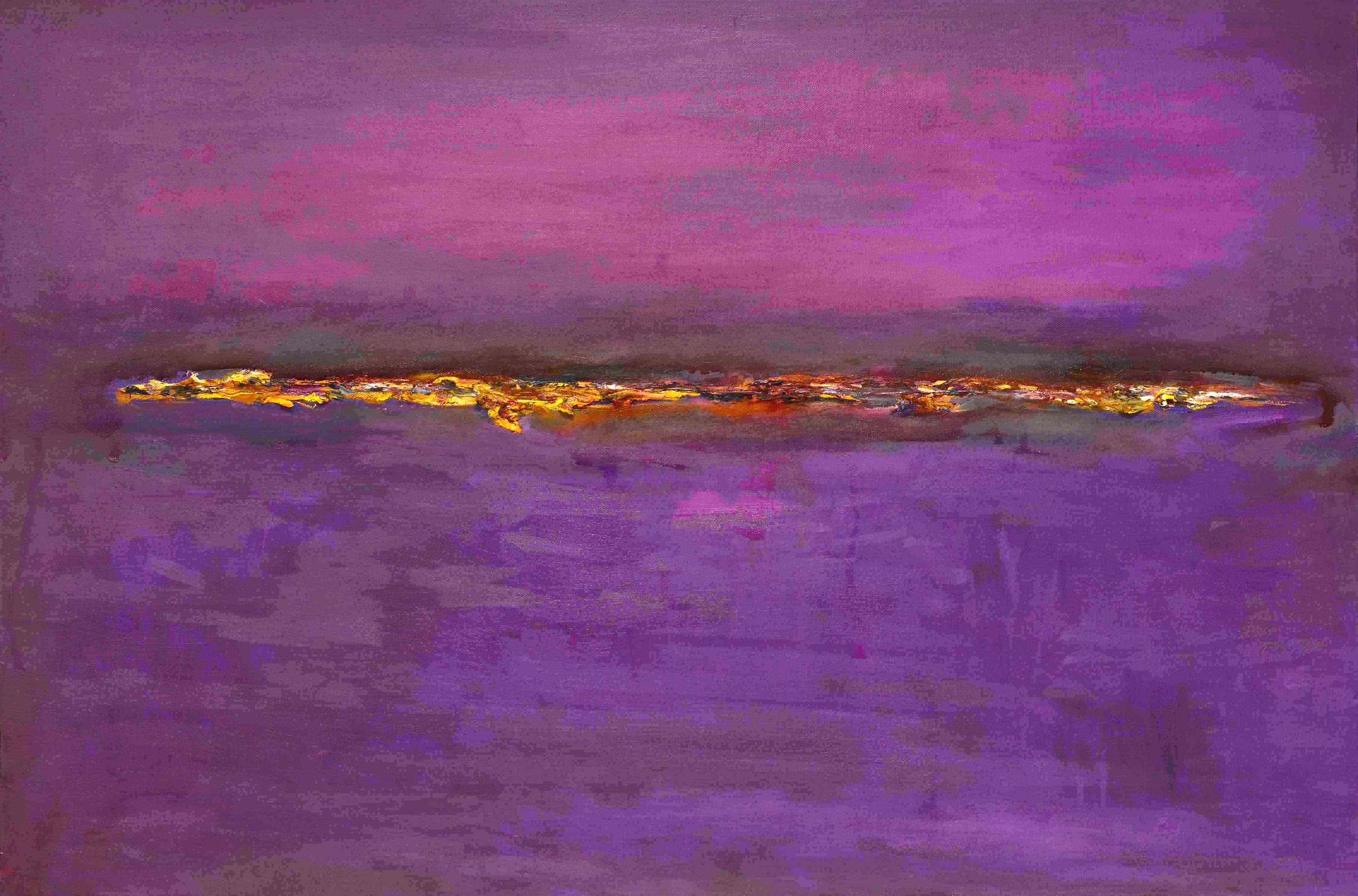 “This provides a texture, a scene that allows people to immediately associate with a feeling. That is the strength of abstract art.”

While Fr. Pham first explored science as a career, artistry is in his blood.

His father was a professional artist and graduated from Fine Art School in Saigon, Vietnam. However, for Fr. Pham’s father the Vietnam War changed everything.

“For the first six years of my life he was in a ‘re-education camp.’ I only visited him once during that time.”

Until his father came home, Fr. Pham was raised by his mother and grandparents. He said he was influenced a lot by his mother’s side of the family.

Fr. Pham said his father taught him drawing when he came back from prison, but his mother, who was a pharmacist, encouraged him in the sciences.

“When we emigrated to the United States, Dad worked for an art restoration company. His name was not well known and as an immigrant supporting his family he was lucky to find work in his own field. However, there was no way he could be an artist.”

Fr. Pham said that was why he initially pursued the sciences.

“When you’re an immigrant you get a thing about financial survival and art is unlikely to make you money.”

After graduating with a B.S. in chemical engineering from UCLA in 2000, Fr. Pham joined the Society of Jesus.

“I had completed two years of my novitiate. As part of that, we do a 30-day silent retreat and during this time I felt a strong desire to pursue art as a medium of prayer. My superior was very supportive, and I felt a door had opened allowing me to explore being an artist.”

Fr. Pham believes Divine Providence has helped him to become a successful artist.

“I was lucky to get a scholarship at the Art Institute of Chicago. I was able to do that because I had been sent to Chicago for philosophy, so I was in the right place at the right time to get the classes I needed to prepare me for acceptance into art school.”

He was then accepted to the Pratt Institute in New York. 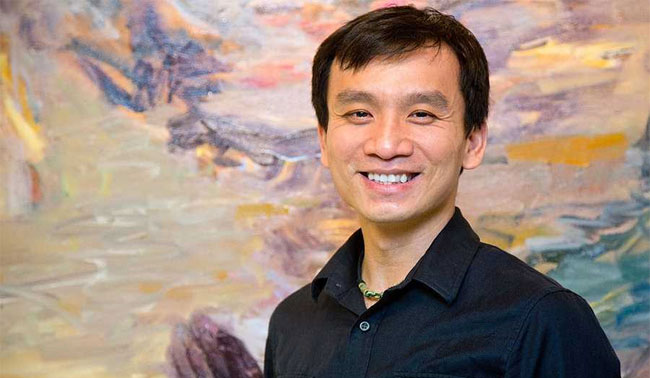 “This was another door that had been opened. I was lucky to get a spot, as out of 11 art schools I applied to, only one accepted me.”

“It was a great education for me. Looking back, it seems like God wants me to pursue this. One door after another opened and I just followed.”

Fr. Pham says he’s taken the genre of abstract expressionism and refined it by using his own cultural, spiritual and personal experience.

“The motif of being wounded is universal, but I relate them to my immigrant experience. It is also a spiritual exercise, in touch with God’s love.

“My goal is not just abstract expressionism but something people can relate to deeply and spiritually.”

He said often abstract expressionism was criticized for being macho, with nothing deeper to it. 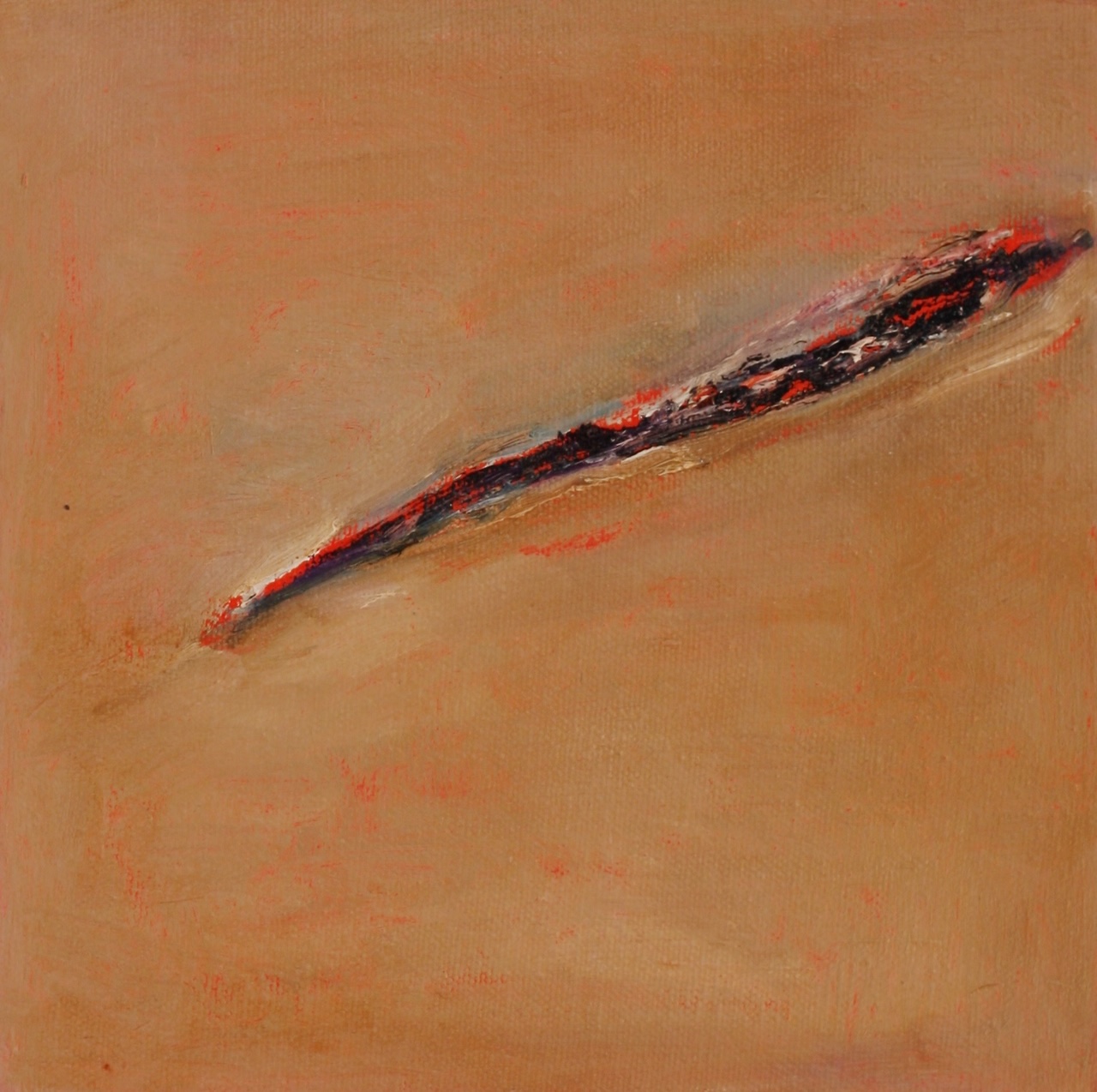 However, it has opened up a new language.

“As part of the next generation of artists, I want to take that and open the conversation further.”

He said the spiritual side can be overlooked, but the social and political elements are very strong. He cited the #MeToo, ecological, feminist and liberation movements as being cultural subsets of where society is at.

“The art is not just about making money but improving the quality of life in society: to critique society and move it in a positive direction.”

Fr. Pham’s theme is Asian American. The immigrant experience is often one of cultural woundedness.

“I’m Vietnamese and American. I function in both cultures, but don’t belong somewhere totally. I’m in-between.”

The cultural experience of not belonging is part of the wound expressed in Fr. Pham’s paintings, but he also brings a spiritual dimension to his paintings.

“They identify with Christ, which fits with my Jesuit identity. 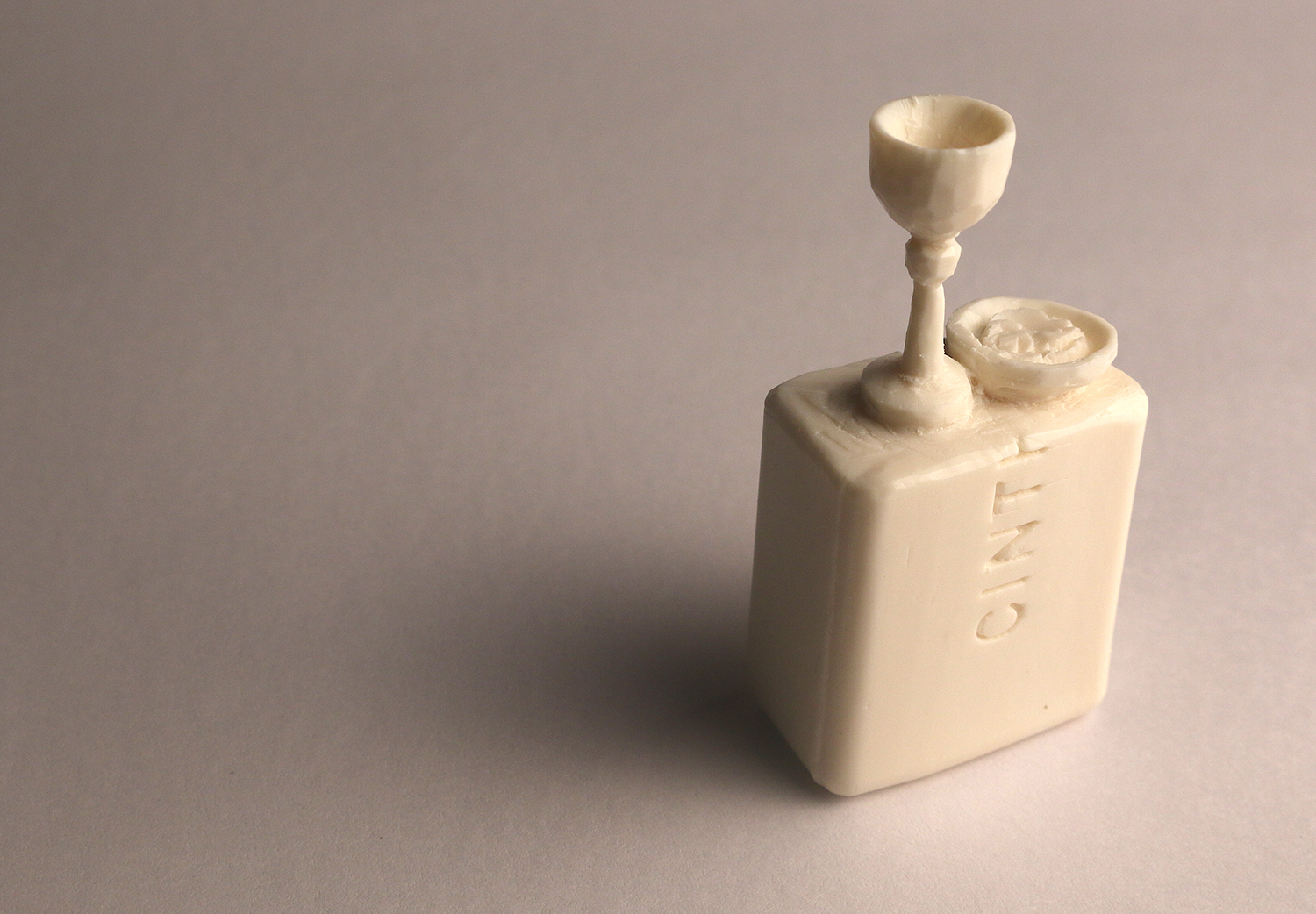 “It is about Christ in the middle, between God and man. He’s marginalized. On the cross and wounded, rejected, but he opens a new life with the resurrection.”

The challenge was to master the direction and focus on the beauty of the wound, not just the suffering, he said.

“Sometimes they can be very hard to look at it. The challenging task for Christians is to accept the Paschal Mystery means suffering and resurrection, dying and living are together. I hope to capture this visually in my painting. One side is painful but hopefully with my skill and work, the paintings provide an attraction and power of invitation.” 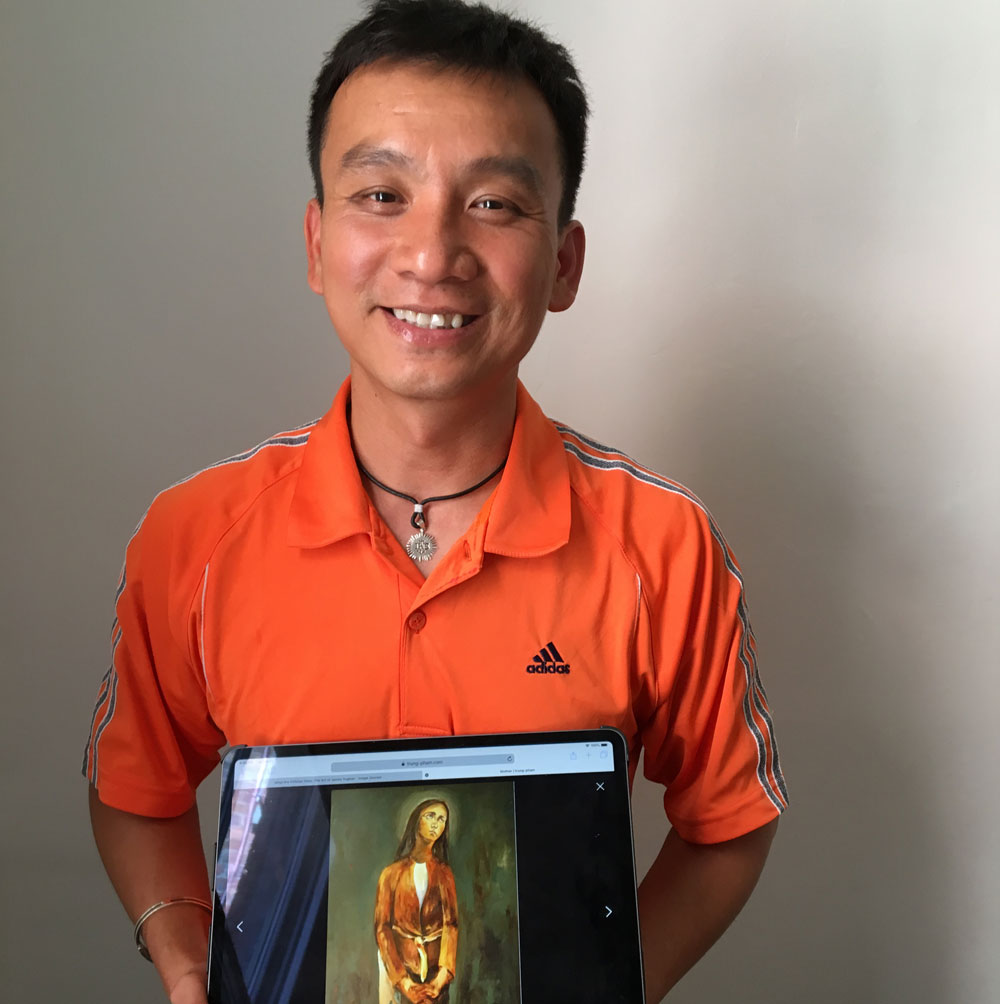 Fr. Pham said because of his life experience he feels this is something he can do — paint a painful topic yet make it engaging and powerful.

“I am doing theology through art. For art and for the church. Creating the in-between path again.”

Republished with permission from Madonna magazine.