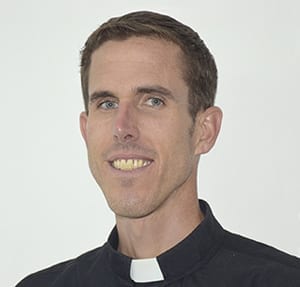 Brad Mills, S.J., was born and raised in the Santa Clara Valley in California by his parents, Andy and Marilou Mills, alongside his sister, Andrea. He went to St. Simon Elementary School in Los Altos and later to Bellarmine College Preparatory in San Jose. His undergraduate studies were at Santa Clara University, where he received degrees in psychology and environmental science. After college, he joined the Jesuit Volunteer Corps for two and a half years, first in the rural village of Tiraque, Bolivia, and then in the coastal city of Tacna, Peru, working as a teacher and school counselor. It was during these years accompanying the people of Latin America that his desire to become a Jesuit priest became clear. After spending a year teaching at Sacred Heart and Our Lady of Grace Nativity Schools in San Jose, Brad entered the novitiate in August 2010. As a novice, he collaborated at many places including a L’Arche community in Seattle and Jesuit High School in Sacramento. At Saint Louis University he completed his philosophy studies and received a master’s degree in social work. In 2015, he participated in a pilgrimage from Guatemala to California along the route taken by migrants traveling northward, where he and several Jesuits learned from the experiences of these migrants. For regency, Brad worked at Catholic Charities and Our Lady of Guadalupe Church in San Diego, where his duties included individual and group psychotherapy, catechesis, helping people apply for U.S. citizenship, visiting an immigration detention center for woman and visiting a home for children with HIV/AIDS in Tijuana. For theology studies he returned to Latin America, spending a semester at the Universidad Iberoamericana in Mexico City and two years at the Pontificia Universidad Javeriana in Bogotá, Colombia, where he earned a Bachelor of Sacred Theology. After being ordained a deacon in November 2020 in Bogotá, he moved to Cartagena, Colombia, to work as a deacon in several small villages near the city with the Misión San Pedro Claver. After ordination, Brad will serve as associate pastor at Most Holy Trinity Church in San Jose, California.