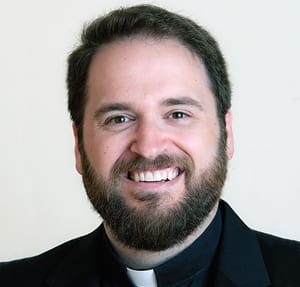 John W. Guyol, S.J., was born and raised in St. Louis, Missouri, surrounded by two loving parents, three siblings and a large extended family. He began thinking seriously about religious life while attending Chaminade College Preparatory. He went on to Villanova University, where he majored in theology and religious studies and dedicated much of his time to the performing arts. He was an active member of the theater and different choirs on campus. After college, John decided to discern his religious vocation while working with the Jesuit Volunteer Corps Northwest in Hays, Montana, on the Fort Belknap Reservation with the Assiniboine and Gros Ventre peoples. Upon meeting the Jesuits and learning about Ignatian spirituality, John quickly knew where God was calling him. After his volunteer year as a music and youth minister, school bus driver and substitute teacher, John entered the novitiate in Portland, Oregon. Next, he returned to St. Louis for first studies, where he studied philosophy and music. He also worked with the Missionaries of Charity in North St. Louis, collaborated with campus ministry at Saint Louis University and sang with the St. Matthew Catholic Church choir. Next, John worked at Jesuit High School in Portland, Oregon. He taught theology, coached volleyball and javelin and went on many retreats. For his third year of regency, John was missioned to Cameroon to study French and work with the Jesuit Refugee Service. He also spent much of his time at Le Foyer d’Esperance, a center of support for children. John returned stateside to continue his Formation at the Jesuit School of Theology of Santa Clara University in Berkeley, California. During his studies, he had the privilege of singing with the choir at Our Lady of Lourdes in Oakland and worked at Bishop O’Dowd High School, where he learned and taught about the church’s call to care for creation. In his final year of Formation, John served as a deacon at Most Holy Trinity Catholic Church in San Jose, California. After ordination, I will have been missioned to the Ravalli Jesuit Community in Missoula, MT, where I will serve at St. Francis Xavier Church and St. Ignatius Mission.